Takumi Minamino scored twice on Tuesday to help Liverpool advance to the fourth round of the English Football League Cup with a 3-0 win over Norwich.

The Japan attacker, who returned from a loan spell with Southampton, made an instant impact in his first appearance of the season for a Liverpool side featuring several reserves and young players. 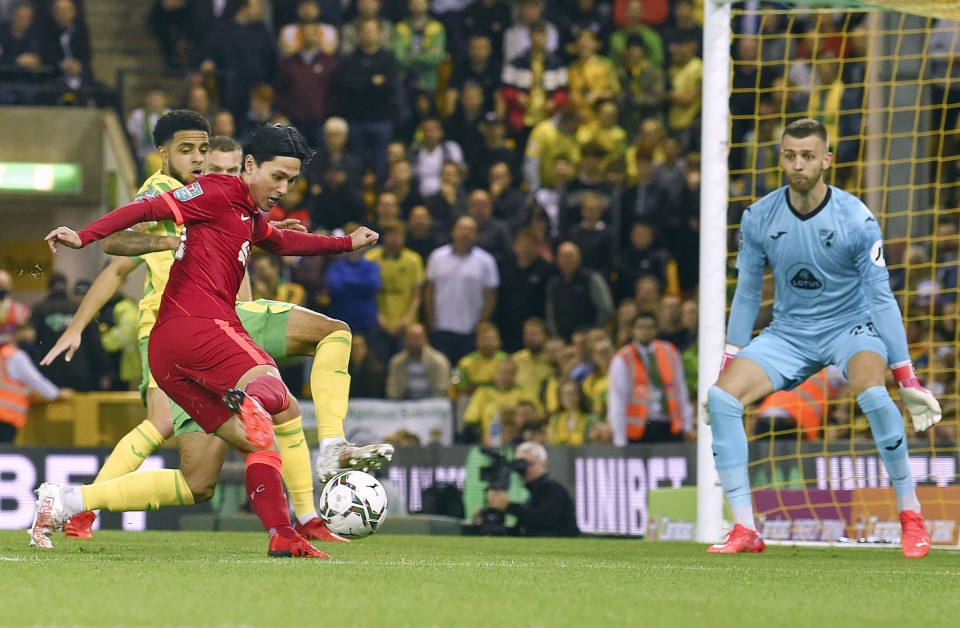 Takumi Minamino (front L) of Liverpool scores a goal against Norwich in the third round of the English Football League Cup on Sept. 21, 2021. (Kyodo)

He gave the visitors the lead from a corner in the fourth minute at Carrow Road, turning and finishing from Divock Origi's knockdown.

After Origi put Liverpool up 2-0 early in the second half, Minamino sealed the result with 10 minutes remaining, gathering a short pass from Alex Oxlade-Chamberlain and finishing under pressure from the right of goal.

Liverpool manager Jurgen Klopp, who moved Minamino from the wing to midfield in the second half, praised the 26-year-old for working hard to come back from a thigh injury that forced his withdrawal from recent national team duties.

"Other players need time as well to get back on track after an injury, but Taki is in a good moment, trained really well and deserved these two goals," Klopp told Liverpool's official site.

In Belgium, Japan winger Kaoru Mitoma scored his first goal for Royale Union Saint-Gilloise in a 7-0 Belgian Cup win over lower-league side Lebbeke.

The 24-year-old, on loan from English Premier League side Brighton, opened the scoring in the 16th minute at Stade Joseph Marien in Brussels.