A member of the Springboks side who triumphed at the 2019 Rugby World Cup in Japan, the 29-year-old du Toit was that year's World Rugby Player of the Year. 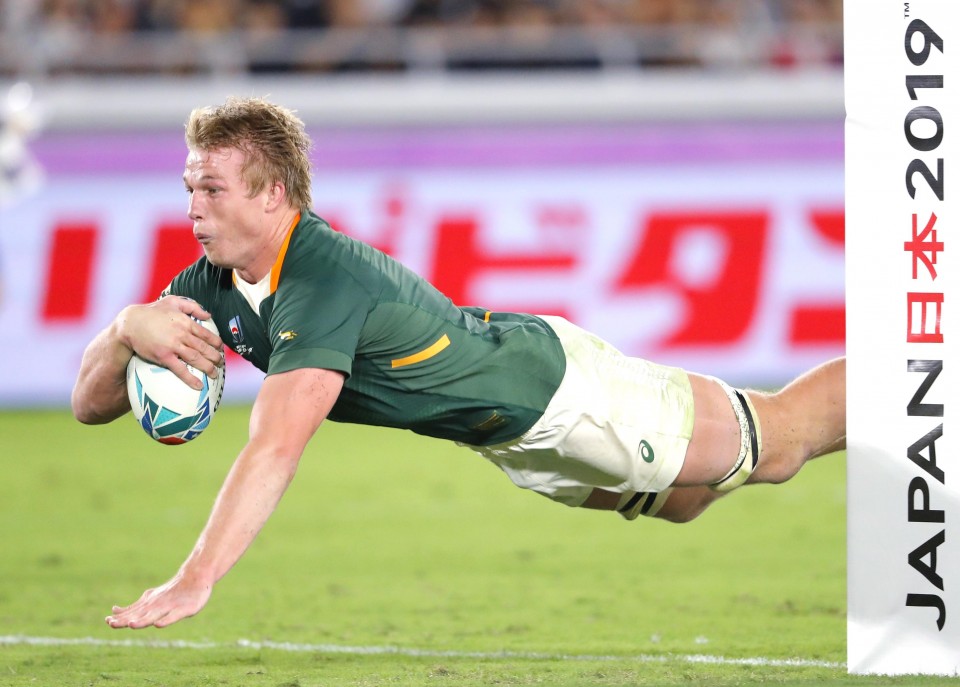 Pieter-Steph du Toit of South Africa scores a try during the second half of a Rugby World Cup Pool B match against New Zealand on Sept. 21, 2019, in Yokohama, eastern Japan. (Kyodo) ==Kyodo

With 56 caps for South Africa, the Cape Town native has played for his hometown side the Stormers since 2016, having previously been a member of the Durban-based Sharks.

"Toyota Verblitz is a club that is well respected and an institution that reflects hard work, high performance and elite standards," du Toit, who plays as lock or flanker, said in a statement through the club.

"It is a privilege to be part of such an environment and I hope to justify the faith put in me by giving my very best on and off the field."

Part of the All Blacks side who finished third at the 2019 World Cup, Tuipulotu has earned 38 caps for New Zealand following his international debut in 2014.

He has played Super Rugby for the Blues since 2014, later captaining the Auckland-based club.

The 28-year-old said he looked forward to playing for Kiwi coach Simon Cron at Verblitz, as well as reconnecting with former New Zealand coach Steve Hansen, who serves as the club's director of rugby.

"(I) hope I can add value and assist Toyota in their goal of being the best club in Japan," Tuipulotu said. "It will be pleasing to see some familiar faces at the club."

Aichi Prefecture-based Verblitz bowed out against eventual champions Panasonic Wild Knights in the semifinals of the last Japan Rugby Top League season in May.