President Joe Biden on Friday called on world leaders to join the United States and the European Union in a commitment to reduce global methane emissions by at least 30 percent by 2030 as part of efforts to tackle the climate crisis.

Many announced their support for the "Global Methane Pledge" to be launched at the upcoming U.N. climate change conference, also known as COP26, to start late next month in Glasgow, Britain, the White House said in a summary of the virtual meeting of a forum of major economies and greenhouse gas emitters.

The gathering at leaders' level and a ministerial session that followed it was attended by representatives from countries including China, the world's largest greenhouse gas emitter, India, Russia, Japan, South Korea, Britain as well as the European Union. 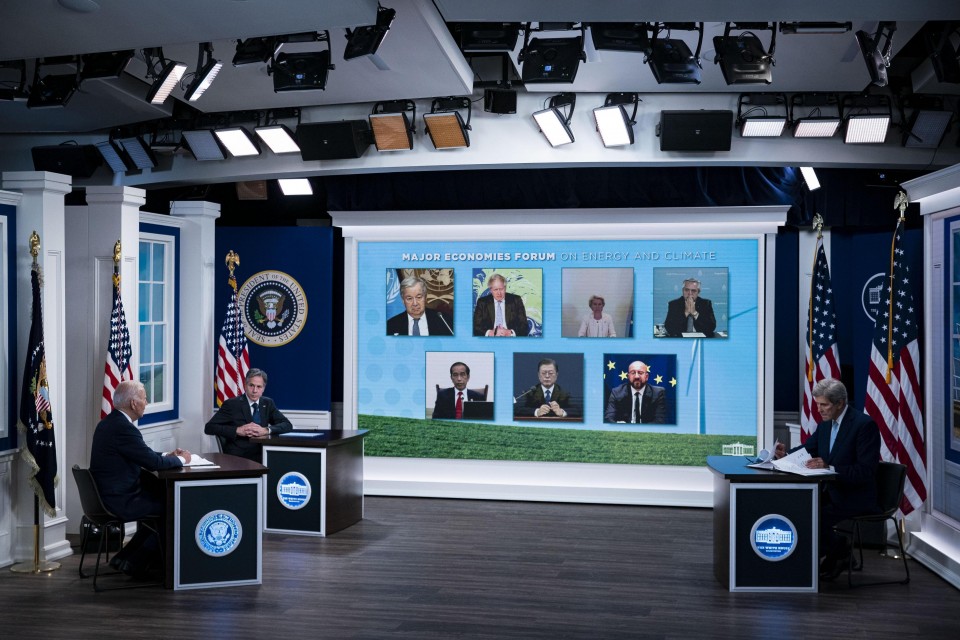 President Joe Biden (L) speaks during a conference call on climate change with the Major Economies Forum on Energy and Climate, as Secretary of State Antony Blinken (2nd from L) and U.S. climate envoy John Kerry (R) listen on Sept. 17, 2021, in Washington. (Getty/Kyodo)

The event took place as Biden seeks to demonstrate U.S. leadership on climate change issues, galvanizing efforts toward the goal of limiting global warming to 1.5 C compared to pre-industrial levels in line with the Paris climate accord.

Recognizing that methane is a powerful climate pollutant that already accounts for about half of the 1.0 C of net warming to date, the Global Methane Pledge will involve "a collective goal" of reducing methane emissions by 30 percent below 2020 levels by 2030 and "implementation of related domestic actions," the summary said.

"There was broad recognition at the meeting of the importance of rapidly reducing methane emissions," and many members of the Major Economies Forum on Energy and Climate, including the European Union, Argentina, Indonesia, Italy, Mexico, Britain and the United States, declared their intention to join, according to the summary.

Noting that some non-forum countries, such as Ghana and Iraq, have also signaled their intent to come on board, the White House said early supporters of the pledge include six of the top 15 methane emitters globally.

Methane is a greenhouse gas emitted by human activities such as leaks from natural gas systems and the raising of livestock. It is the second most abundant human-caused greenhouse gas and can cause air pollution that can threaten human health.

China, the United States, Russia, India, Brazil, Indonesia, Nigeria and Mexico are estimated to be responsible for nearly half of all anthropogenic methane emissions, the U.S. Environmental Protection Agency said on its website.

At the outset of the meeting, Biden pitched the pledge, saying that it will not only rapidly reduce the rate of global warming but will also produce "a very valuable side benefit," such as improving public health and agricultural output.

"We believe the collective goal is both ambitious but realistic. And we urge you to join us in announcing this pledge at COP26," he said.

During the meeting, Japanese Prime Minister Yoshihide Suga called on members of the forum in a video message to carry out "ambitious goals" to create a "global-scale tide" to address climate change issues, according to the Japanese Foreign Ministry.

The press release did not mention whether Japan supports the Global Methane Pledge.

In April, Suga announced that Japan, the world's fifth-largest emitter, will aim to reduce greenhouse gas emissions by 46 percent from fiscal 2013 levels by fiscal 2030, a significant increase from its previous commitment for a 26 percent cut.

U.S. sets goal to make half of new vehicles sold in 2030 electric