While flying cars may seem like a futuristic fantasy from science fiction movies, a startup in Japan is aiming to offer people rides in such vehicles in about four years' time at the World Exposition in Osaka.

SkyDrive Inc., a developer of flying cars founded only three years ago, demonstrated the country's first public test flight of a manned vehicle in August last year, and hopes to introduce such mobility as an option that has advantages over existing modes of transport. 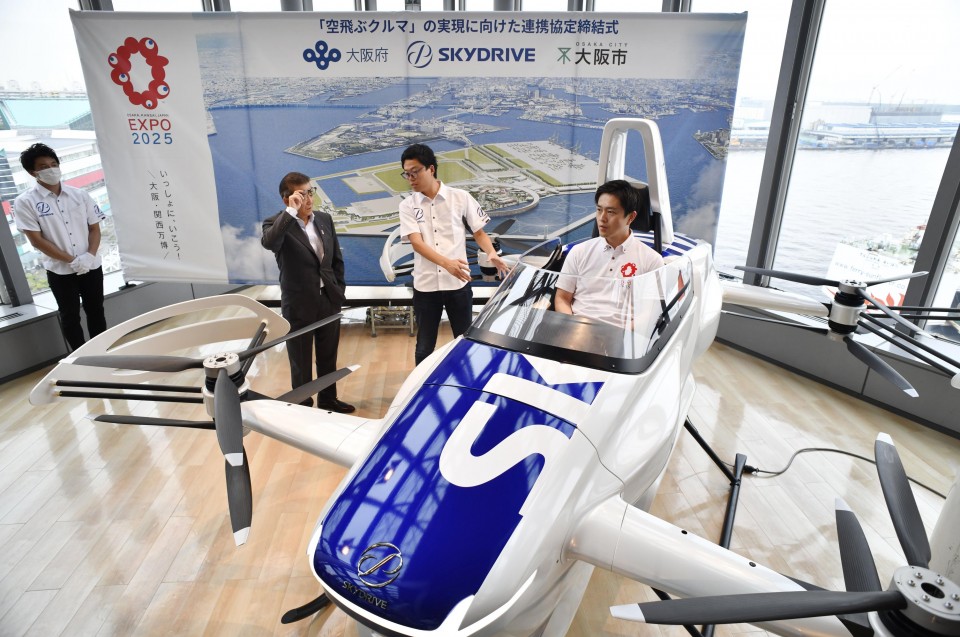 Osaka Gov. Hirofumi Yoshimura rides a full-scale "flying car" model of SkyDrive Inc. on Sept. 14, 2021, in Osaka. The western Japan prefecture and city governments formed a partnership agreement with the Tokyo-based developer the same day to support the project to put it into practical use. Seen second from left is Osaka Mayor Ichiro Matsui and second from right is SkyDrive CEO Tomohiro Fukuzawa. (Kyodo) ==Kyodo

"Our mission is to drive a once-in-a-century mobility revolution," CEO Tomohiro Fukuzawa said Wednesday in a press conference at the Foreign Correspondents' Club of Japan.

"One hundred years ago, automobiles and airplanes were introduced to humans (allowing us) to go anywhere we wanted. After that, for one hundred years, there was no revolution...but only improvement."

The Tokyo-based company, with about 100 employees including engineers from Toyota Motor Corp. and Mitsubishi Heavy Industries Ltd., signed a partnership agreement with Osaka Prefecture and the city of Osaka this month to work toward the practical utilization of its flying cars in the western Japan metropolis ahead of the World Exposition.

Osaka Gov. Hirofumi Yoshimura said this month he wants flying cars to begin carrying passengers in the Osaka Bay area in 2024, such as by shuttling the around five kilometers between Universal Studios Japan and the city's Yumeshima artificial island, the venue of the exposition. 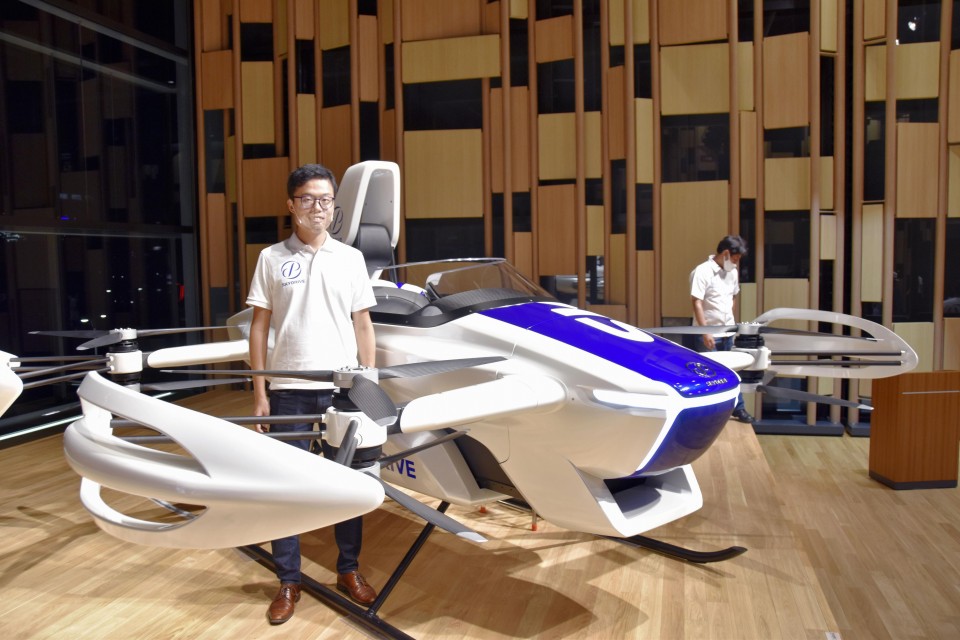 Tomohiro Fukuzawa, CEO of SkyDrive Inc., stands in front of an SD-03 prototype flying car developed by his company in Tokyo on Aug. 28, 2020. (Kyodo)

"The strong leadership of Osaka Prefecture and Osaka city is now pushing ahead our project," said Fukuzawa, who used to work in Toyota's procurement operations, expressing hope that the partnership will lead to the social acceptance of such vehicles.

"From here, we will go straight to the 2025 Osaka Expo to start flying cars," he said.

About 150 countries and 25 international organizations are expected to participate in the exposition, which will take place between April 13 and Oct. 13, 2025. Over 50 nations had confirmed their participation as of Aug. 20, according to the organizers. 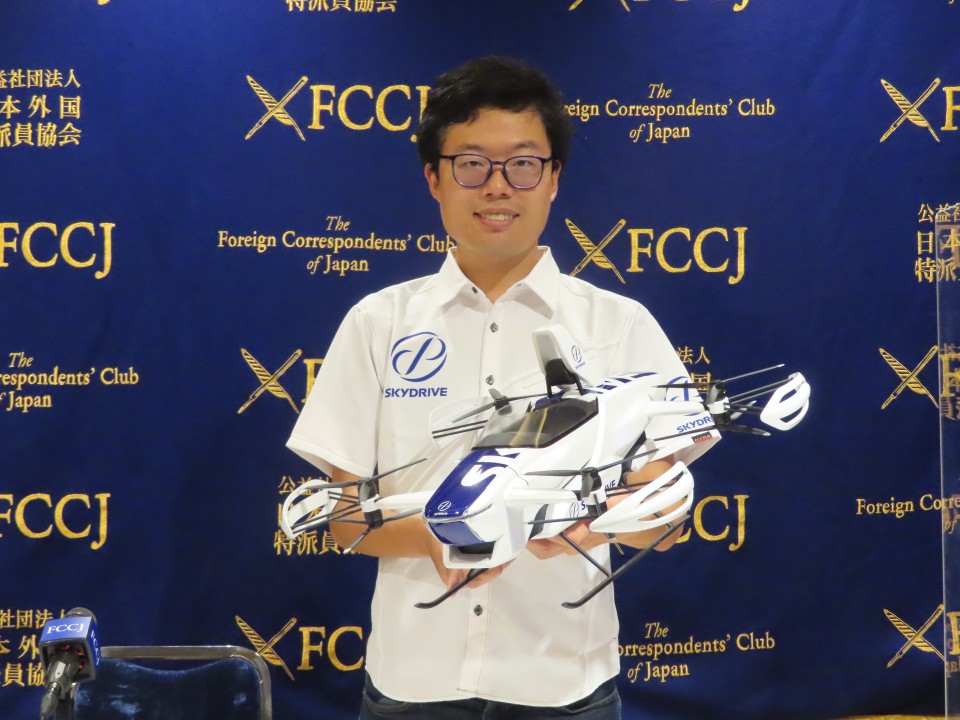 Tomohiro Fukuzawa, CEO of SkyDrive Inc., holds a model of a flying car developed by his company at the Foreign Correspondents' Club of Japan in Tokyo on Sept. 22, 2021. (Kyodo)

Companies around the world have been developing flying cars, formally called "electric vertical takeoff and landing" or eVTOL vehicles, with about 10 starting manned test flights, Fukuzawa said at the press conference.

SkyDrive's SD-03 used for the test flight is powered by electric motors that drive rotors deployed in four locations, with each location housing two rotors, and the company is aiming to develop the world's smallest eVTOL vehicle.

Flying cars are quieter and easier to operate than helicopters, Fukuzawa said.

The Japanese government is also pushing the development of flying cars, in collaboration with private companies in the logistics and automobile sectors, for purposes such as transportation in rural areas and disaster relief.

In 2018, a public-private panel established by the government drew up a road map stating that it aims to start commercial flying vehicle services in the mid-2020s, while stating that improved safety and reliability are among the challenges that need to be addressed.