Japan's main opposition party on Friday released a set of emergency proposals for a coronavirus response covering cash handouts, as the ruling Liberal Democratic Party's election for picking a new leader is set to take place later this month.

The proposals by the Constitutional Democratic Party of Japan include giving 100,000 yen ($910) to low-income households, offering new benefits to businesses to curb social and economic activities to stop the spread of the virus, and prioritizing vaccinating teachers.

The CDPJ plans to submit its proposals to the government and ruling coalition of the Liberal Democratic Party and Komeito, demanding the measures be implemented intensively in the next three weeks. 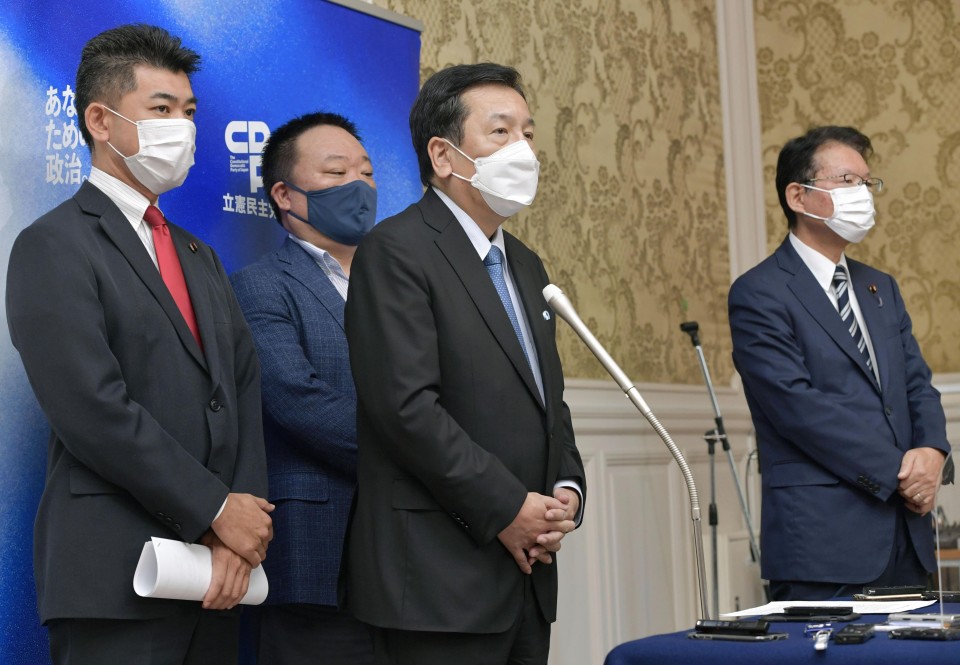 Yukio Edano (2nd from R), head of the main opposition Constitutional Democratic Party of Japan, announces the party's urgent proposal to prevent the spread of coronavirus infections at the parliament building in Tokyo on Sept. 10, 2021. (Kyodo) ==Kyodo

"We have compiled what must be done now while the government is not functioning due to the LDP presidential election," CDPJ leader Yukio Edano told reporters.

Among other measures requested are postponing or canceling events in areas where infections are expanding, and creating a medical system for helping COVID-19 patients recuperating at home or accommodation facilities when their condition suddenly deteriorates.

To prevent the spread of the highly contagious Delta variant of the coronavirus among family members, the party also proposed to support schools in conducting PCR tests regularly and holding classes online.

The LDP is gearing up for its Sept. 29 leadership race to pick the successor to Prime Minister Yoshihide Suga, who abruptly announced his resignation last week amid mounting criticism over his COVID-19 response and declining public approval ratings. The election effectively decides the next premier as the LDP controls the powerful lower house of the Diet.

Edano suggested Kono should prioritize his responsibilities as the minister in charge of Japan's vaccination efforts, saying, "Coronavirus response comes first rather than a party presidential election."

So far, about half of Japan's population has been fully vaccinated against COVID-19, and the government aims to complete inoculations of those who wish to receive shots between October and November.

The CDPJ and other opposition parties are trying to join forces toward a general election to be held in the coming months as the House of Representatives members' terms expire on Oct. 21.

Earlier this week, the CDPJ, the Japanese Communist Party, the Social Democratic Party and Reiwa Shinsengumi agreed on a set of joint pledges, including lowering the consumption tax rate and achieving a zero-carbon society without nuclear energy.

They also vowed to raise the minimum wage, oppose amending the Constitution and giving couples the option of keeping separate surnames after marriage.