Lone yokozuna Terunofuji got back on track Tuesday at the Autumn Grand Sumo Tournament, overcoming stubborn rank-and-file opponent Ura to maintain his outright lead at 9-1.

A day after relinquishing his perfect record in a surprise loss to No. 4 maegashira Daieisho, the title favorite needed brains and brawn to dispatch No. 6 Ura in an intriguing final bout of Day 10 at Ryogoku Kokugikan. 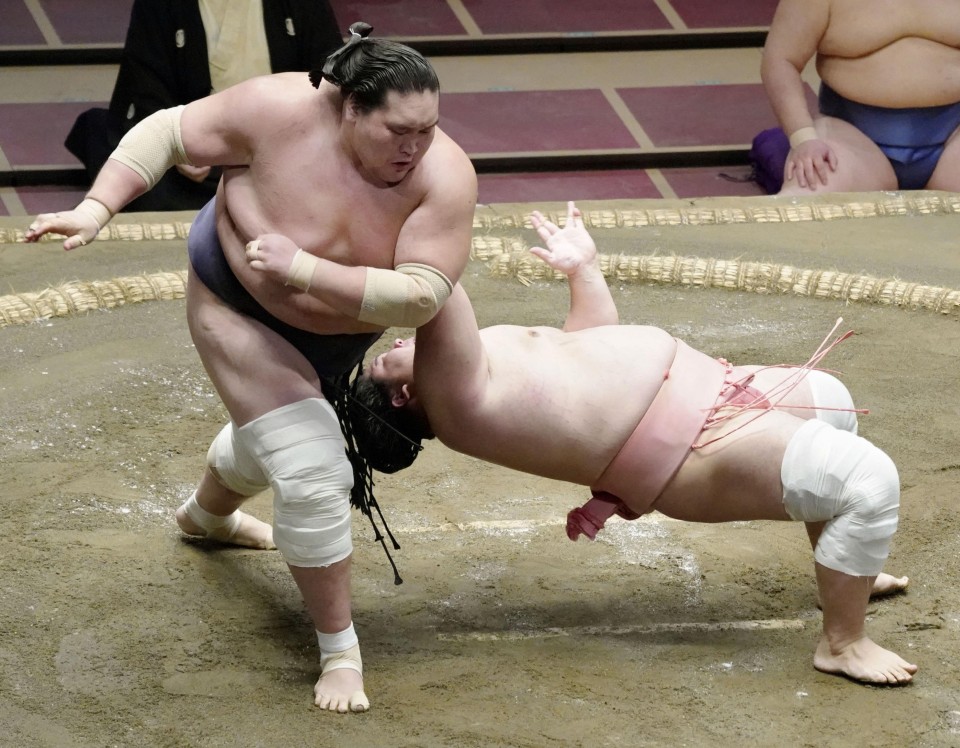 With a hold on his opponent's arm, Terunofuji had to fend off an audacious leg-pick from the maegashira before the pair broke apart and locked up again.

Four-time Emperor's Cup winner Terunofuji ended the stalemate with an overarm throw as Ura attempted a gravity-defying escape, doubling over backward with his hand on the newly promoted yokozuna's belt.

The sole grand champion in the absence of Hakuho, who is out of the 15-day tournament under coronavirus safety protocols, Terunofuji has a one-win buffer over a pair of rank-and-file wrestlers, No. 6 Onosho and No. 10 Myogiryu, at 8-2.

Onosho pushed out No. 11 Endo (7-3), while Myogiryu forced out No. 8 Okinoumi (7-3) to maintain second place on the leaderboard.

"I'm just doing my sumo. I'm just taking each day at a time and not thinking beyond that," Myogiryu said.

Ozeki Takakeisho pushed out newly promoted sekiwake Meisei (4-6) and improved to 6-4 with his fourth straight victory.

The pair traded slaps and thrusts in the middle before Takakeisho seized the momentum with a series of hard shoves.

The demotion-threatened "kadoban" ozeki, who needs eight or more wins to keep his rank, has turned things around in the second week of the tournament following a nightmare 0-3 start.

Ozeki Shodai moved to the brink of a winning record at 7-3 by slapping down Daieisho (6-4).

Former sekiwake Daieisho thrust Shodai backward with his opening attack, but the ozeki remained planted inside the ring before dumping his opponent to the clay.

Sekiwake Mitakeumi advanced to 7-3 by overwhelming No. 3 Wakatakakage (4-6), pushing the maegashira straight back and out after landing a powerful opening hit.

No. 2 Kiribayama and No. 17 Chiyonokuni are also among six wrestlers with a 7-3 record.

Both komusubi improved to 4-6 on the day. Takayasu won by default against No. 3 Kotonowaka (3-7), who earlier in the day pulled out with a left knee injury, while Ichinojo forced out No. 4 Tamawashi (3-7).