For Hollywood star Johnny Depp, the story of an act of industrial pollution that devastated the southwestern Japanese coastal community of Minamata over half a century ago is one that had to be told, not only for its victims but for current and future generations.

The film "Minamata," which he both produced and stars in, arrives this month to do just that in Japan, where despite perceptions that the incident belongs to history, litigation is still ongoing by those who feel they were overlooked for support.

Depp plays Eugene Smith, a renowned American photojournalist whose 1971 photo of a teenage girl sickened by the mercury poisoning that struck the city in the 1950s and 1960s awakened the world to the tragedy and became emblematic of the dangers of industry running amok when economic growth is prized above all else. 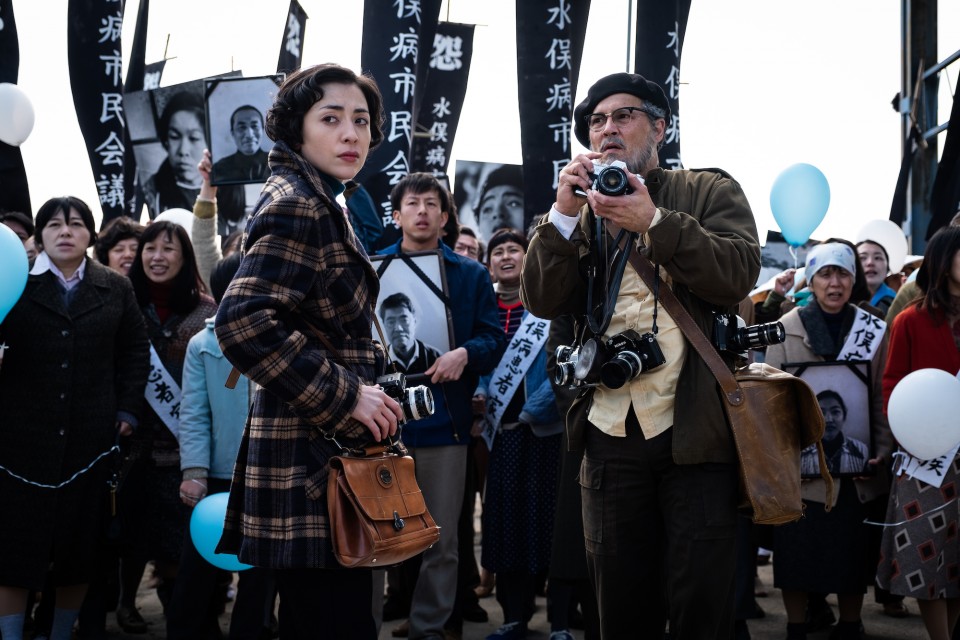 The disease was formally acknowledged by local health authorities in 1956, although initially without knowledge that it was caused by the dumping of mercury-tainted wastewater into the sea by a Chisso Corp. chemical plant in the city, which continued for more than a decade.

People who had eaten contaminated seafood suffered paralysis in the hands and feet and visual-field defects. The disease, which was named after the city, also triggered congenital disabilities.

Directed by Andrew Levitas, the film is a fictional portrayal based on actual events described in a 1975 photo essay book by Smith. It covers the three years from 1971 in which Smith and his Tokyo-born wife Aileen Mioko Smith documented the accounts of local patients living with the disease and their campaign to win recognition from Chisso and the Japanese government.

According to its creators, the movie is intended as a cautionary tale. 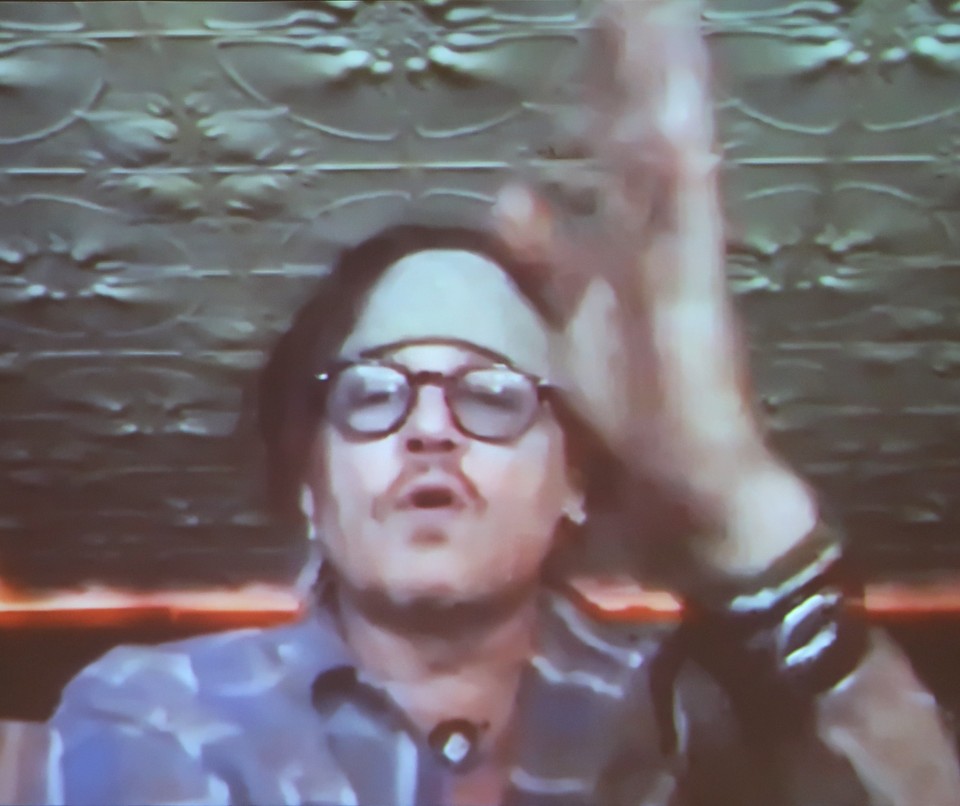 Johnny Depp speaks from France during a videoconference with Japanese media on Sept. 2, 2021. (Kyodo)

"It's such an important story, first because it happened, many people suffered, and secondly because it's still happening everywhere in other places," Depp said in a videoconference from France with Japanese media ahead of the film's Sept. 23 release in Japan.

It also shows how people need to stand up to help each other, Depp said, particularly amid the COVID-19 pandemic, which he sees as "dividing and isolating people from other people."

"What happened in Minamata all those years ago is a shocking kind of pathetic telling of what was going to come later in various parts of the world in various ways," said the 58-year-old Pirates of the Caribbean star.

Before its launch at Japanese cinemas, the film, which premiered at the Berlin International Film Festival in February 2020, screened at two Tokyo schools. Some students admitted afterward that they had had limited awareness of the gravity of Minamata disease, despite having studied the issue in school.

"I studied about Minamata disease last year in history class, but the movie was so real. The problem is far more serious than I thought," said Mami Matsukawa, 15, who was among some 180 students who watched the film at the public Kojimachi Junior High School.

At Den-en Chofu Gakuen Junior & Senior High School, a private girls' school where about 400 students viewed the movie, senior Yuna Yokoo said she felt the Japanese government had been telling school children that Minamata disease "is over." 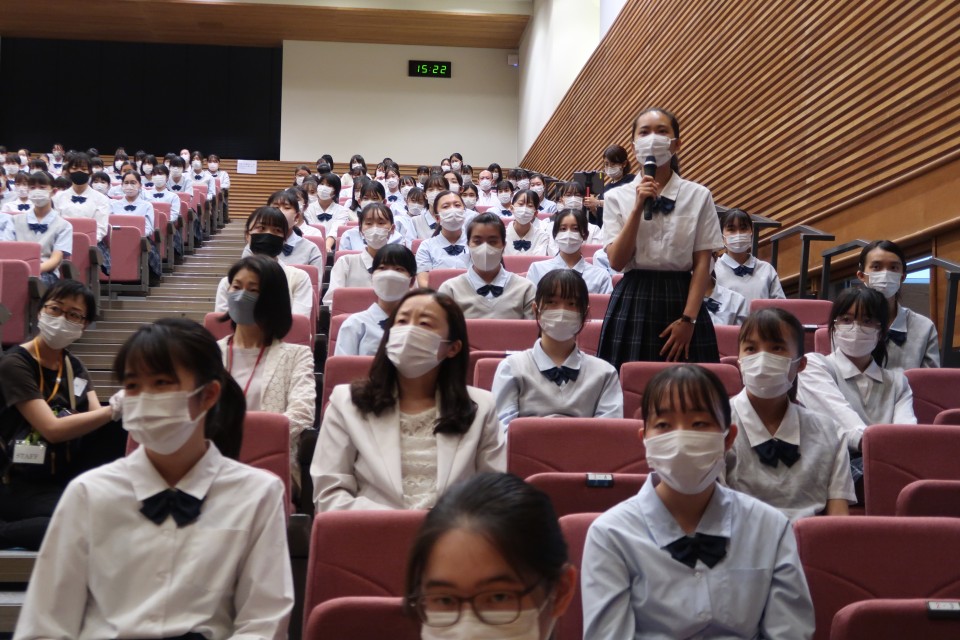 "I myself was, when I saw it in our textbook, passing it off as a thing of the past," she said, but she now sees it as an example of injustice. She, like other students who viewed the film, said they wanted to think about how they could let more people know that Minamata disease is an ongoing issue.

It was not until 1968 that the Japanese government recognized that Minamata disease was caused by industrial pollution and stopped the water discharge. It is considered one of four major pollution diseases in the country and taught in schools as an example of the negative impact of postwar Japan's rapid economic growth.

At Kojimachi Junior High, students also had a chance to meet online and listen to accounts of three patients born with the disease because their mothers had eaten toxic seafood.

One of them, Koichiro Matsunaga, 58, said, "I feel bitter to think that I might not have suffered if the government had valued the lives of people and stopped the discharge" right after the disease was officially recognized in 1956. He was born four years later. 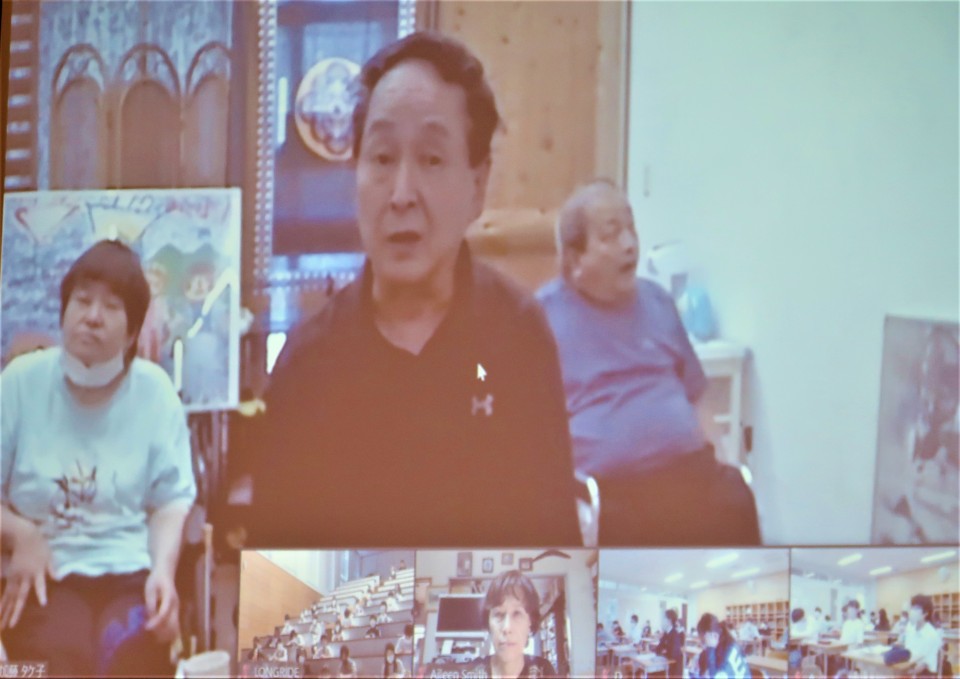 As of the end of March this year, 2,283 people in Minamata and surrounding areas had been recognized as Minamata disease sufferers, of whom 1,988 have died. A further 1,426 people were still filing for recognition.

In addition, about 38,000 unrecognized sufferers received relief money based on a 2009 special law on the disease, while nearly 10,000 others were rejected. Many of those excluded are involved in lawsuits in various parts of Japan.

Depp said that as soon as the idea to produce the film was put to him, he "thought very simply this has to be made (and) see the light of day." But he was also determined that it should "really tell this story properly," according to the film's production notes.

In a bid to accurately portray the events and people involved, Levitas and the production team traveled to Minamata in September 2018 and met with some of the surviving victims and their families.

They even tracked down Smith's customs forms to find the exact cameras and lenses he brought to Minamata but shot most scenes in the Serbian capital Belgrade and the coastal town of Tivat in Montenegro as Minamata has modernized drastically since the 1970s. 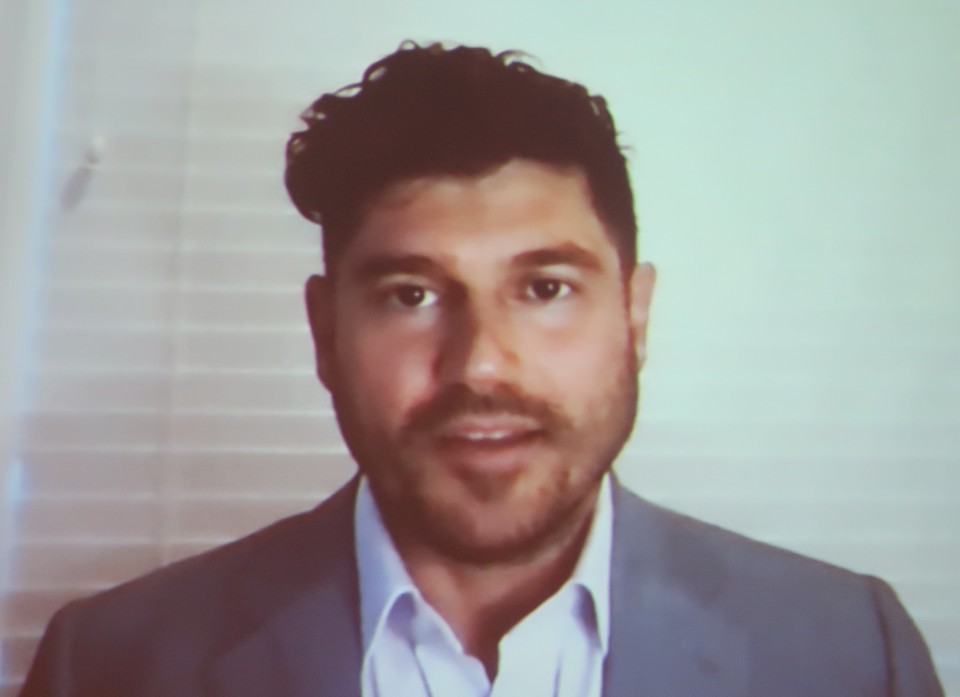 Andrew Levitas speaks from New York during a videoconference with Japanese media on Sept. 2, 2021. (Kyodo)

"What was most important for us was expressing the essential truth underneath everything," said the 44-year-old Levitas, who joined Depp in the press conference in a video call from New York.

By seeing the film through "Eugene Smith's lens" as an outsider coming into the community, "viewers around the world would be able to digest that and understand that," he said.

Tokyo-born actress Minami, who goes by her first name, played the role of Aileen Smith. In a separate interview with Kyodo News, she said that overall, Japan can be proud of the story of the Minamata disease victims' struggle for recognition.

"The fact is, the people of Minamata in Japan fought the country, and of course problems still persist, but they won," Minami said. "I would like to convey such energy and power as a positive message."

Levitas said he hopes to inspire and uplift people to try to advocate for each other, recognize that their voices can be heard, and take a stand when governments and corporations act against their best interests.

"All pollution issues around the world are related because they essentially are depriving every one of us of the first right, which is to live an unpolluted and healthy life," he said.

Depp said the time since producing the film has "only made my passion stronger" to tackle the "impossible-to-count instances of injustice that exist around the world in so many different forms," calling the Minamata pollution incident a "type of corruption."

"This film needs to be seen, I believe, to understand the plight of the people of Minamata and what they went through and also to underline how corruption can exist very easily and do away with people at the drop of a hat if nobody sees," he said.