New yokozuna Terunofuji won a tough clash of unbeaten wrestlers against Mongolian compatriot Kiribayama to improve to 5-0 and remain in the lead on Thursday, the fifth day of the Autumn Grand Sumo Tournament.

Terunofuji, the sole grand champion fighting at the 15-day event at Tokyo's Ryogoku Kokugikan with yokozuna Hakuho's Miyagino stable sidelined due to coronavirus infections, is tied with unbeaten No. 17 maegashira Chiyonokuni. 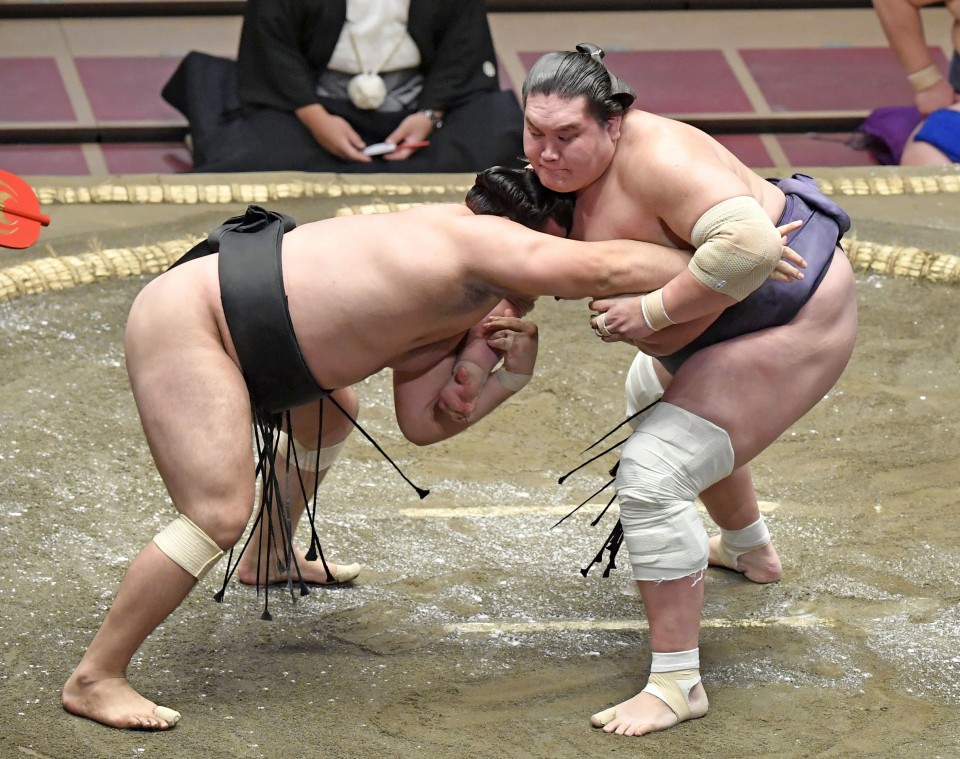 Against his much smaller compatriot, Terunofuji quickly found himself on the defensive as the No. 2 maegashira locked up one of the yokozuna's arms and tried to pull him over the straw but failed. Kiribayama (4-1) tried again with the other arm and in the process secured an over-arm belt hold but failed to press his advantage.

As the bout dragged on and Terunofuji proved unmovable, Kiribayama tried to break the deadlock but surrendered a belt hold to the yokozuna, who then easily forced him over the straw bales.

The fourth wrestler who started the day at 4-0, No. 10 maegashira Myogiryu, was unceremoniously pulled down on his charge in a loss to No. 8 Tobizaru, who improved to 4-1.

Ozeki Takakeisho (2-3) looked like his old self in a one-sided shove-out win over up-and-coming No. 3 maegashira Kotonowaka. The 23-year-old's first career bout against an ozeki lasted only seconds as he was instantly put on the back foot by Takakeisho's charge and run out of the ring.

On Wednesday, Takakeisho snapped his losing streak with a win over No. 1 Hoshoryu by "tsukiotoshi" thrust down, a last-ditch defensive technique that avoided disaster but does not always inspire confidence.

Fellow ozeki Shodai (4-1) had an easy time against tricky No. 3 Wakatakakage (3-2), blasting him back off his feet with both hands on the charge and winning by shove out.

Sekiwake Mitakeumi improved to 4-1 with a win over Mongolian No. 4 Tamawashi. No. 6 Onosho also joined the group of six wrestlers one back of the leading duo.

Hoshoryu, a nephew of former yokozuna Asashoryu, withdrew from his bout on Thursday after being diagnosed with tonsilitis, losing by default to komusubi and former ozeki Takayasu (1-4).

No. 6 Ura (2-3), who has built a reputation for being unpredictable, won his bout against No. 4 Daieisho (3-2) with a rare "okuritsuridashi" move, in which he hoisted his onrushing opponent up and thrust him out over his shoulder.