The WE League, Japan's first professional women's football competition, kicked off Sunday, bringing with it hopes the country's once-dominant national team will be reinvigorated and that new life will be injected into the women's game.

Powerhouse INAC Kobe Leonessa claimed a 5-0 home win over Omiya Ardija in the opening fixture in front of 4,123 people at a COVID-19-restricted Noevir Stadium, forward Megumi Takase and her 17-year-old strike partner Maika Hamano each bagging a memorable brace. 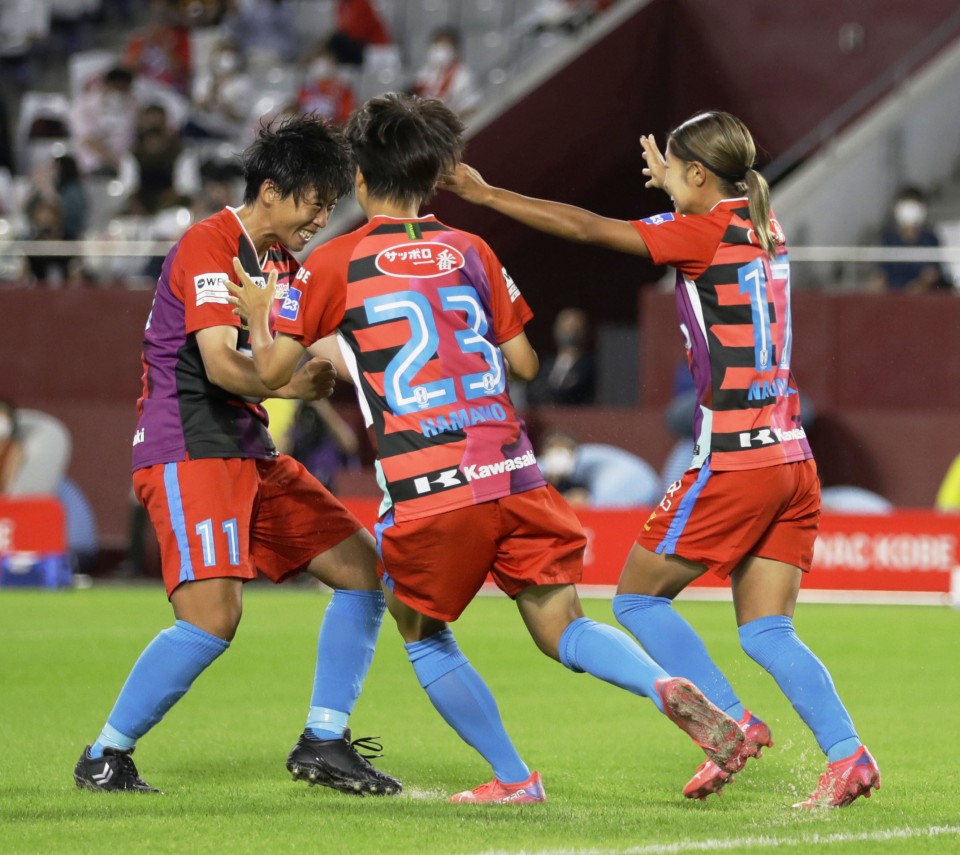 INAC Kobe Leonessa's Maika Hamano (23) celebrates after Megumi Takase (L) scores a goal during the opening match of the WE League against Omiya Ardija Ventus on Sept. 12, 2021, at Noevir Stadium in Kobe. (Kyodo)

Starting the inaugural season with 11 clubs, the WE League supersedes the amateur Nadeshiko League as the top flight of Japanese women's football and requires each club to have at least 15 players on professional contracts.

WE stands for "women empowerment" with the league hoping to play a leading role in women's social advancement. Each participating club is asked to include at least one female both on its coaching staff and club board.

Establishing a day-care facility at each stadium team was another requirement as the league aims to support players with children and also to encourage families with small children to attend games, setting an example for other women's sports to follow.

The national team, Nadeshiko Japan, won the 2011 World Cup and were runners-up at the 2012 London Olympics as well as the 2015 World Cup, establishing the profile of women's football in the domestic sporting scene.

But Nadeshiko Japan have stagnated since, failing to qualify for the Rio de Janeiro Olympics before losing in the first round of the knockout phase both at the 2019 World Cup as well as this summer's Tokyo Olympics.

"Hamano is a player who will lead the future Japan team. Getting the end product is huge for us as a team too," INAC manager Kei Hoshikawa said after the forward steered home from close range for INAC's second and headed in the fourth against Omiya.

Omiya, one of the two newly founded sides alongside Sanfrecce Hiroshima, is helmed by the World Cup-winning manager Norio Sasaki.

Visiting Sanfrecce overran Chifure AS Elfen Saitama 3-0, AC Nagano Parceiro were 3-1 winners away to Albirex Niigata, while Mynavi Sendai and Nojima Stella Kanagawa Sagamihara finished their clash at Yurtec Stadium without a goal.

Five games will be played during each round of fixtures with the bye team required to take part in activities that help deliver on the vision of the WE League.

Unlike the men's J-League, the WE League runs in parallel with the European calendar with the season scheduled to end in May.