The lone yokozuna in the absence of Hakuho, whose stable has been sidelined following two COVID-19 cases, Terunofuji (4-0) stayed unbeaten in his first tournament at sumo's highest rank by dispatching No. 2 maegashira Hokutofuji on Day 4 at Ryogoku Kokugikan. 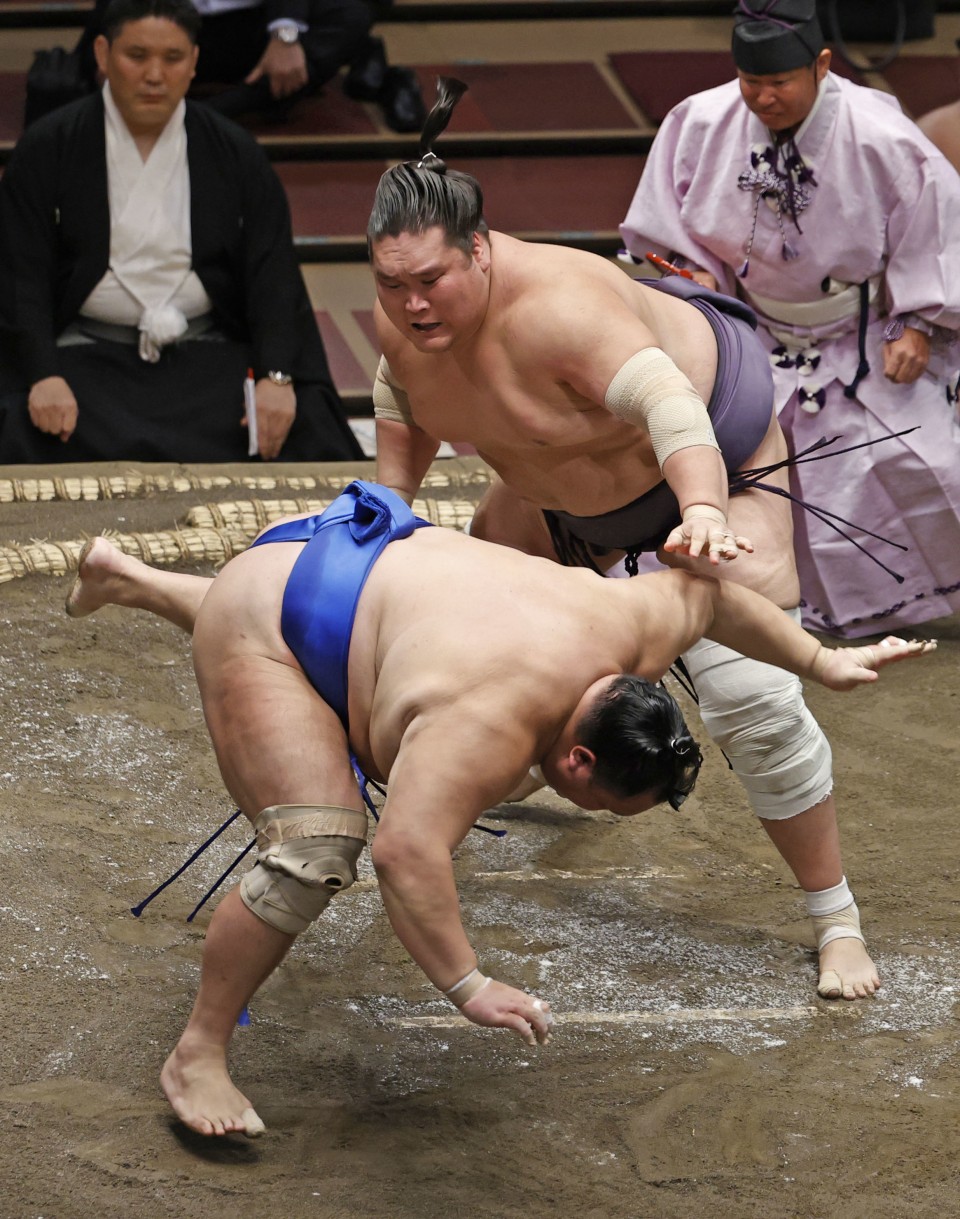 Having beaten two opponents from the three "sanyaku" ranks below yokozuna, Hokutofuji (2-2) made little ground with a thrusting attack against Terunofuji, who kept the maegashira at arm's length and calmly waited for an opening to pull him to the clay.

Terunofuji will battle unbeaten Mongolian No. 2 Kiribayama (4-0) on Day 5 of the 15-day tournament.

Following a nightmare 0-3 start, Takakeisho faced down dangerous Mongolian No. 1 Hoshoryu in the day's penultimate bout.

Lacking his usual explosive power at the jump, Takakeisho traded blows with the lighter maegashira and kept him away from his belt before slapping him down.

Competing as a demotion-threatened "kadoban" ozeki following his withdrawal in July with a neck injury, the 25-year-old Takakeisho must post a winning record here to remain at the second-highest rank.

Ozeki Shodai (3-1) outmaneuvered No. 1 Takanosho for his third straight victory after starting the tournament with an upset loss to Hoshoryu.

Takanosho (1-3) opened with a strong pushing attack before Shodai stepped to the side and thrust the former sekiwake down at the edge.

Sekiwake Mitakeumi notched a rare victory over his longtime nemesis, komusubi Takayasu, who took his fourth straight loss in a horror start to the meet.

Coming into the bout with just six wins from their 25 previous meetings, Mitakeumi yanked the winless former ozeki to the sandy surface to improve to 3-1.

New sekiwake Meisei improved to 2-2 by beating rising No. 3 Kotonowaka (2-2), ending their closely fought bout at the edge with a skillful pulling underarm throw.

No. 13 Tsurugisho (1-3) forfeited his bout against No. 17 Chiyonokuni (4-0) after recording a high temperature, but has been scheduled to return to action on Day 5 following a negative screening for the coronavirus.