Senior diplomats from Japan, the United States and South Korea agreed Tuesday to continue their efforts toward the denuclearization of North Korea through "dialogue and sanctions," a Japanese Foreign Ministry official said.

Their meeting in Tokyo came a day after Pyongyang said it had successfully carried out tests of a new long-range cruise missile over the weekend. 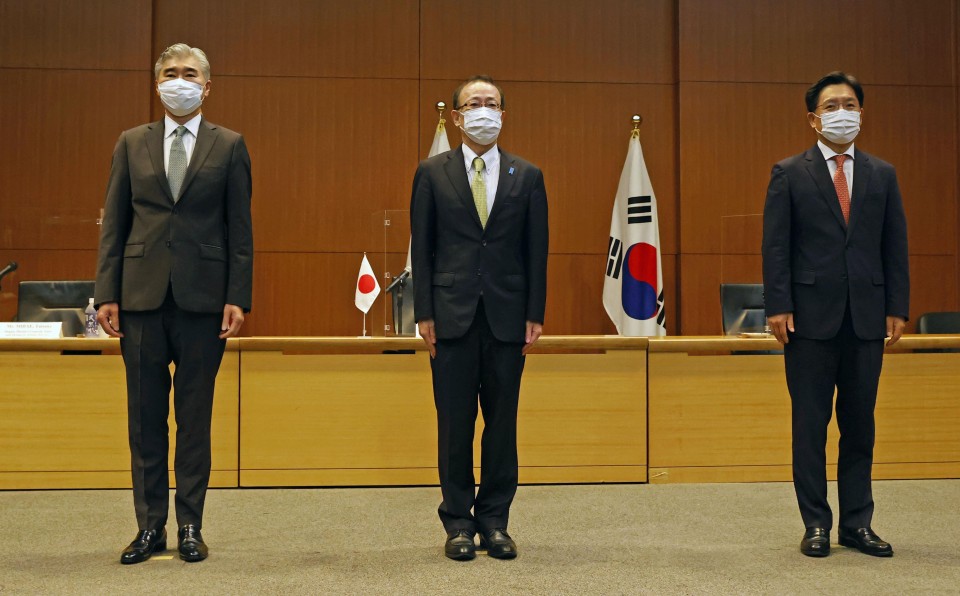 It also followed a report released late August by the International Atomic Energy Agency that said North Korea appeared to have resumed operating its main nuclear reactor used to produce weapons fuels amid stalled denuclearization negotiations with the United States.

Washington has pushed for complete denuclearization, while Pyongyang has called for sanctions relief.

During Tuesday's meeting, the three countries agreed to work closely toward the goal of complete denuclearization of North Korea in line with U.N. Security Council resolutions aimed at curbing its programs to develop weapons of mass destruction and ballistic missiles, the ministry said.

At the outset of the three-way talks, Takehiro Funakoshi, head of the Japanese Foreign Ministry's Asian and Oceanian Affairs Bureau, said, "Our cooperation becomes all the more important as North Korea advances furthermore in its nuclear and missile development."

Sung Kim, the U.S. special representative for North Korea, said in response, "We hope the DPRK will respond positively to our multiple offers to meet without preconditions." DPRK is the acronym of the Democratic People's Republic of Korea, North Korea's official name.

Washington said Monday it remains ready to engage with Pyongyang toward ridding the country of its nuclear weapons even after the North announced the test-firing of the new cruise missile.

The United States has offered to meet "anywhere, anytime without preconditions" with North Korea, but Kim said Pyongyang has yet to respond to Washington's call.

The new cruise missile can hit a target 1,500 kilometers away, according to the state-run Korean Central News Agency, a range that would include almost all of the Japanese archipelago.

At the meeting, Japan gained support from the United States and South Korea to address North Korean abductions of Japanese nationals in the 1970s and 1980s, the ministry said.

The trilateral meeting was last held in June in Seoul.

U.S. President Joe Biden's administration has attached importance to strengthening cooperation with Washington's two closest allies in Asia, whose bilateral relations have sunk to the lowest level in decades over the wartime labor and compensation issues.

In late April, the Biden administration completed a review of its North Korea policy and signaled its readiness for dialogue with North Korea while building on a 2018 bilateral agreement that included Pyongyang's commitment toward denuclearization.