Japan slumped to a shock 1-0 defeat against Oman in the opening game of the 2022 World Cup final Asian qualifying round on Thursday.

Issam Al Sabhi scored the 88th-minute winner four minutes after coming off the bench as Hajime Moriyasu's men remained disjointed and second-best throughout the Group B game at a rainy Panasonic Stadium in Suita.

Japan, currently 24th in the FIFA rankings, have reached the last six World Cup finals since their debut in 1998. 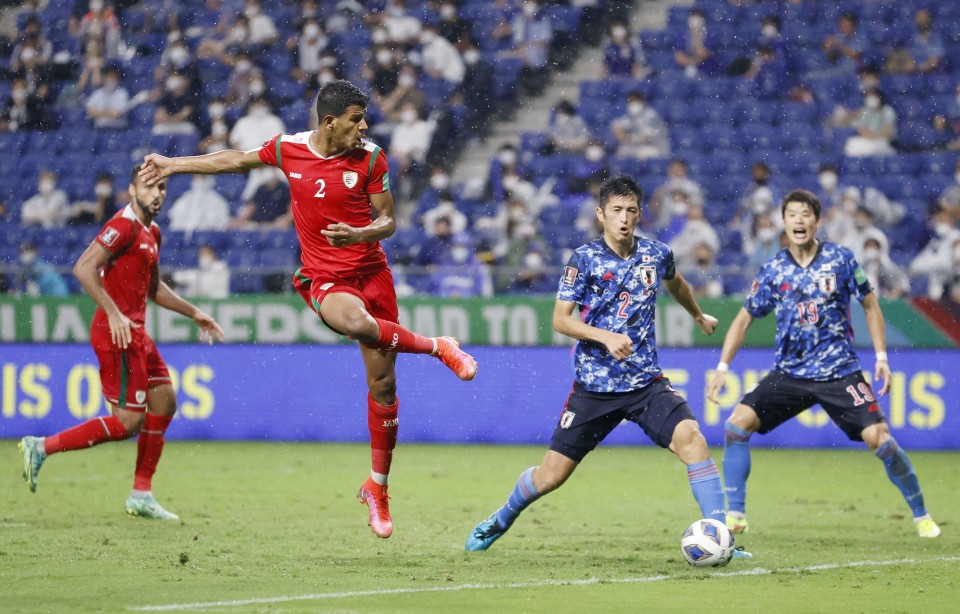 Oman's Issam Al Sabhi (2nd from L) scores a goal during the second half of the 2022 World Cup Asian qualifier against Japan at Panasonic Stadium in Osaka Prefecture on Sept. 2, 2021. (Kyodo)

"They dominated the game, they've prepared well. It was a difficult game," said Moriyasu. "It turned out to be a really frustrating defeat. We'll make our best preparation to get three points in the next game."

Japan were without the new Arsenal signing Takehiro Tomiyasu as he completed the transfer and Liverpool's Takumi Minamino remained on the bench following a left thigh complaint.

But Samurai Blue looked sluggish regardless after the majority of the players flew back from Europe, getting played off the park by the 79th-ranked opponents who have had a monthlong training camp to prepare for the game.

"It wasn't good at all. We need to raise our intensity more than anything, with no holding back," said captain Maya Yoshida. 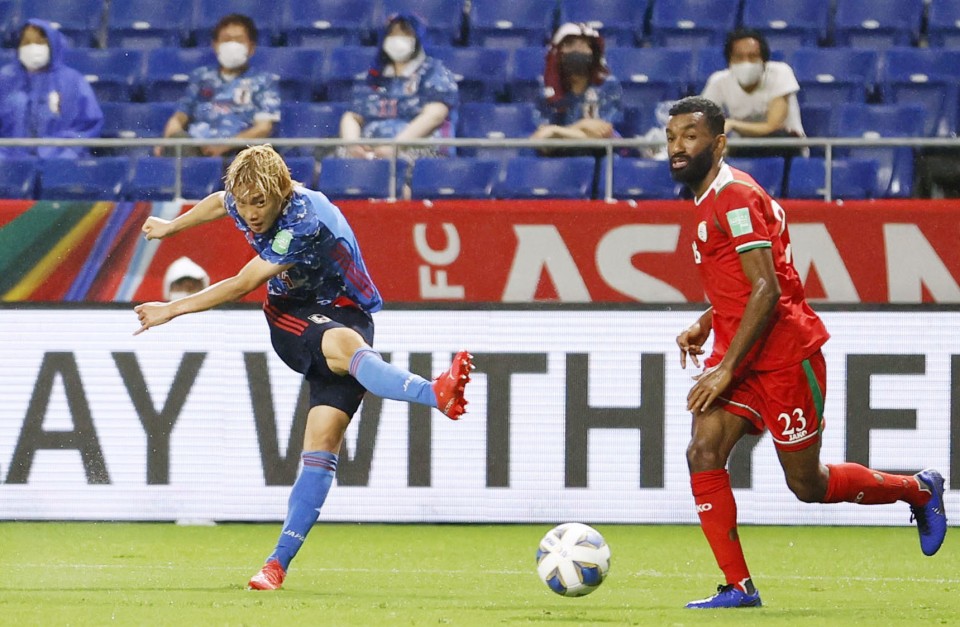 Junya Ito (L) of Japan shoots during the first half of the 2022 World Cup Asian qualifier against Oman at Panasonic Stadium in Suita, Osaka Prefecture, on Sept. 2, 2021. (Kyodo) ==Kyodo

Japan opened their final qualifying campaign with a home defeat for the second straight time after losing 2-1 to the United Arab Emirates in September 2016 en route to qualifying for the 2018 World Cup.

Rabia Al Mandhar's close-range effort and another from Harib Al-saadi from distance forced two corners in the first 15 minutes as Japan made a slow start against a solid Oman midfield.

The hosts finally tested the goal in the 28th minute when Yoshida's long ball into the box found Junya Ito, who controlled well but could only shoot straight at keeper Faiz Al-rushaidi from point-blank range.

Japan failed to break down the visiting defense with lone forward Yuya Osako and attacking midfielder Daichi Kamada under constant pressure, while Oman ended the half strongly as Al Mandhar forced another corner with a shot from inside the box. 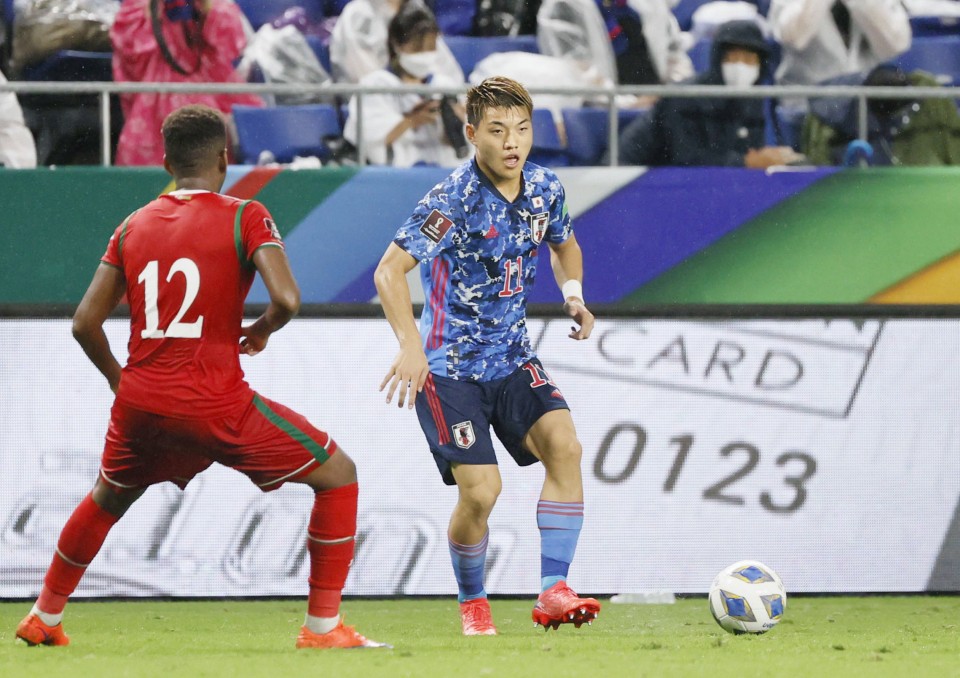 Ritsu Doan (R) of Japan passes the ball during the second half of the 2022 World Cup Asian qualifier against Oman at Panasonic Stadium in Suita, Osaka Prefecture, on Sept. 2, 2021. (Kyodo) ==Kyodo

Japan, who brought on the on-form Kyogo Furuhashi to replace an anonymous Genki Haraguchi in the left attacking midfield at halftime, had Ito's header saved and Wataru Endo's close-range effort deflected before they survived a penalty scare in the 51st minute.

Abdullah Fawaz beat Hiroki Sakai down the left and sent in a cross that took a touch before hitting the left arm of Yuto Nagatomo. The referee pointed to the spot but overturned the decision after a VAR check when the arm was judged to not have been outstretched from the body.

Oman continued to push, Ali Al-busaidi this time beating Sakai only to see his powerful effort denied by the head of keeper Shuichi Gonda from a tight angle on the hour mark.

Osako's low drive from the edge of the box forced a diving save from Al-rushadi five minutes later as Japan introduced Ritsu Doan and Takefusa Kubo to provide spark to the attack, but Salah Al-yahyai, who has been a danger throughout, deservedly set up the winner.

Good combination play breached the left side of the Japanese defense before Al-yahyai's cross was met on a volley by Al Sabhi, with the ball bouncing into the far corner.

Issam Al Sabhi (C) reacts after scoring the opener during the second half of the 2022 World Cup Asian qualifier against Japan at Panasonic Stadium in Suita, Osaka Prefecture, on Sept. 2, 2021. (Kyodo) ==Kyodo

"They sat back and we couldn't break them down from the first half," said veteran Nagatomo. "We couldn't adjust in the second half either and it was a defeat that shouldn't have happened."

Japan will face China on Tuesday, with the away game moved to a neutral venue in Doha due to COVID-19 travel restrictions.

Saudi Arabia, Australia and Vietnam are also in the same group with top two teams after a six-team round-robin earning automatic qualifications for the World Cup in Qatar.