Shohei Ohtani fell short in his attempt at yet another MLB record on Sunday, pitching dominantly but failing to get a win as the Los Angeles Angels lost their final home game of the season 5-1 to the Seattle Mariners.

Ohtani, who was 9-2 in 22 starts entering Sunday, had a chance to match all-time great Babe Ruth as the only player in the American or National leagues to win 10 games as a pitcher while hitting 10 homers in the same season.

The 27-year-old Japanese worked seven innings in a 10-strikeout, zero-walk performance, giving up only one run -- a seventh-inning homer by rookie Jarred Kelenic -- on five hits, leaving the game in a 1-1 tie. 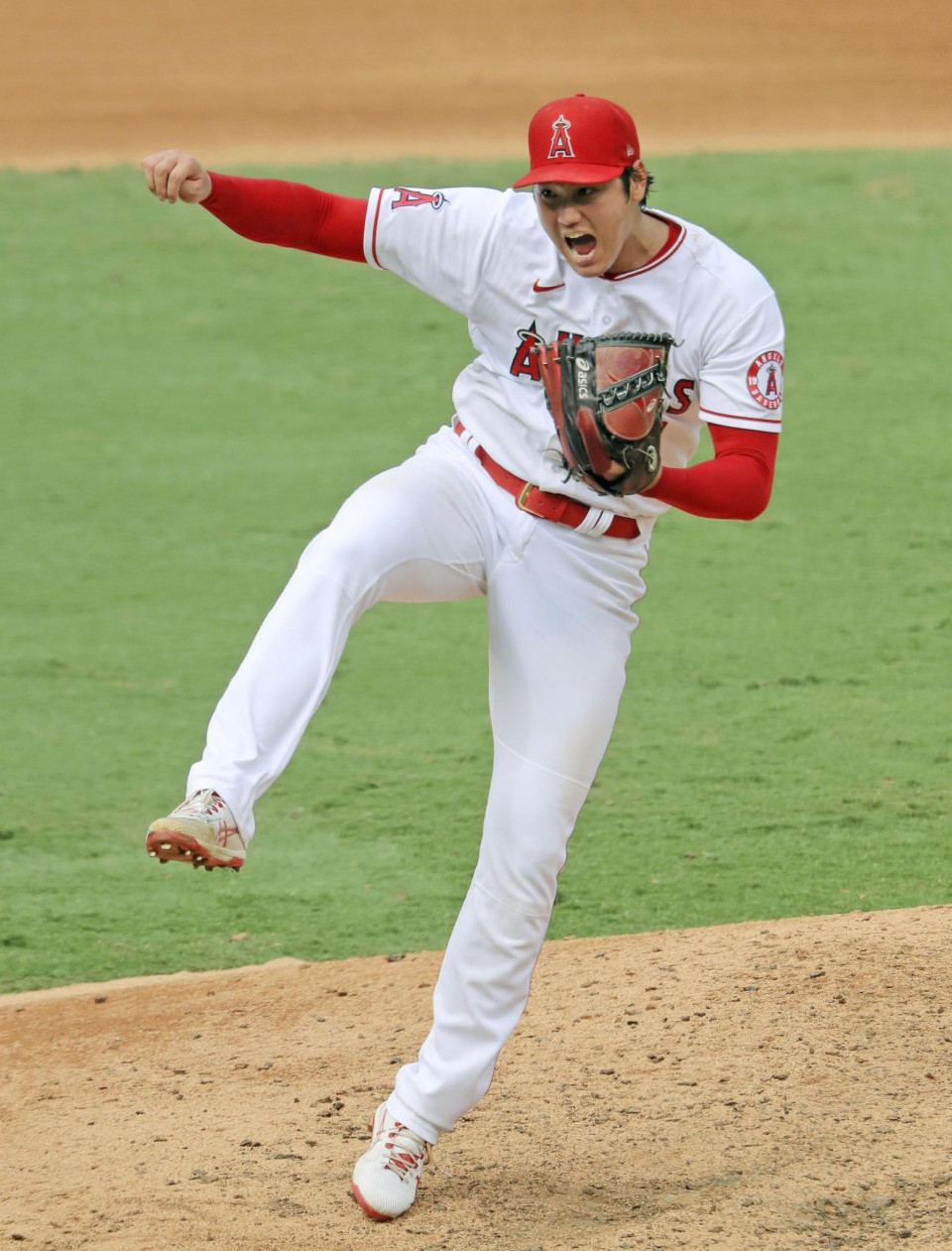 Shohei Ohtani of the Los Angeles Angels pitches against the Seattle Mariners on Sept. 26, 2021, at Angel Stadium in Anaheim, California. (Kyodo) ==Kyodo

"I wanted to keep their score at zero. Considering my overall performance, I think I could've pitched eight scoreless innings," said Ohtani, who is 6-0 in 13 starts at Angel Stadium this season.

"With the cheering and home-field atmosphere, it makes sense that my stats are good (here)."

The favorite to win American League MVP said he is determined to play in the postseason with the Angels, who missed the playoffs for a seventh straight year.

"September should be a month when I'm tingling with excitement," he said. "I'll work hard so I'll get to do that next year."

Ohtani reached another milestone, however, ending the third inning with his 150th strikeout of the season.

Fans gave Ohtani a standing ovation as he walked off the Angel Stadium mound for the last time this season. He was 1-for-3 at the plate.

But after he left, relievers Jose Quijada (0-2) and Austin Warren combined to give up four runs in the eighth as the bullpen could not hold on to Ohtani's gem.

It is unclear whether the two-way star will make a further mound appearance in the Angels' remaining games on the road.

"I threw long innings today, so I don't know about that yet," Ohtani said when asked whether he would start the season finale in Seattle on Oct. 3.

Seattle starter Marco Gonzales (10-5) pitched seven strong innings to match Ohtani, and the Mariners pulled within 2-1/2 games in the chase for the AL's second and final wild-card berth.

The Angels' only run came on Kurt Suzuki's homer with one out in the bottom of the second.

The loss dropped the Angels to 74-82, ensuring their sixth straight losing season.

Responding to a question about his MVP chances, Ohtani said he could not answer. The Toronto Blue Jays' Vladimir Guerrero Jr., who holds a share of the MLB home run lead with 46, appears to be his only rival in the AL race.

"First and foremost, I want to end the season healthy. If people are giving me good reviews, I feel honored, but I've decided I'm not going to critique my own performance," Ohtani said.