Japan and Vietnam share "the same destiny" and should boost defense cooperation for regional stability based on the rule of law, Defense Minister Nobuo Kishi said Sunday, amid China's increasingly assertive maritime activity.

In a speech delivered in Hanoi, Kishi said Vietnam is an important partner for Japan and stressed the need for the countries to work together to address various regional security issues amid the present "harsh reality," according to the Japanese Defense Ministry. 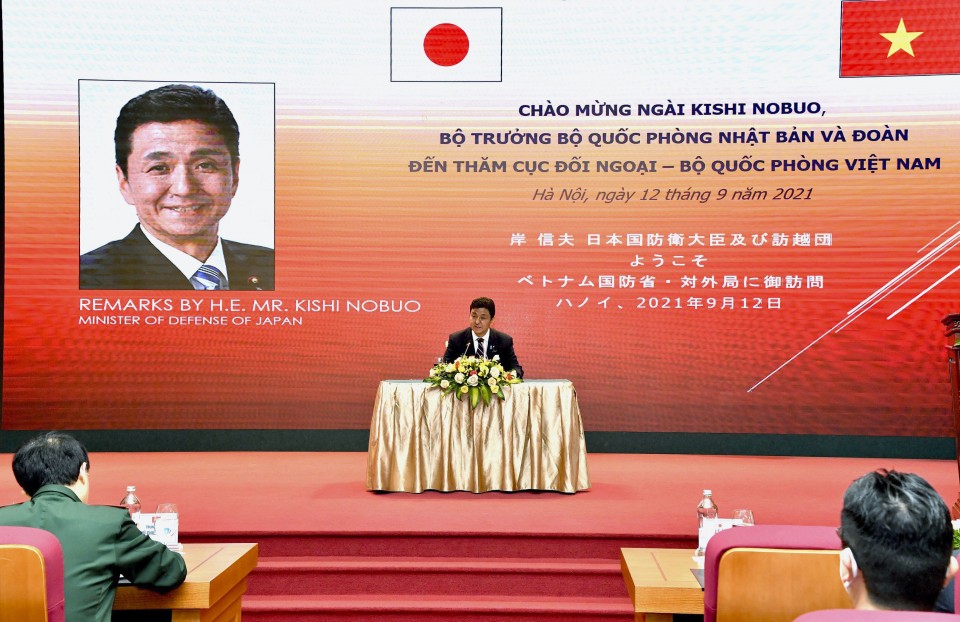 The speech at the Vietnamese Defense Ministry came a day after the two countries signed a deal enabling exports of Japanese-made defense equipment and technology to the Southeast Asian country.

Vietnam, a key member of the Association of Southeast Asian Nations, is the 11th country to sign such an agreement with Japan, at a time when China is stepping up its territorial claims in parts of the East and South China seas.

Kishi, on his first overseas trip as defense minister, met with his Vietnamese counterpart Phan Van Giang on Saturday and the two reaffirmed the importance of freedom of navigation and overflight in the Indo-Pacific region, in an implicit reference to Beijing.

On Sunday, Kishi reiterated the deal signifies a "new stage" in the defense partnership between Japan and Vietnam, which is engaged in territorial disputes with China over the Spratly and Paracel island groups in the South China Sea, with Beijing accused of militarizing outposts it has constructed.

He also said the scope of the partnership will be expanded into new areas, including cybersecurity and handling the coronavirus pandemic.

The Japanese ministry said separately Sunday that a submarine suspected to be from China was spotted off a southern island.

The submerged vessel headed northwest off the eastern coast of Amami-Oshima Island on Friday morning in the so-called contiguous zone, just outside Japan's territorial waters, and it moved west in the East China Sea on Sunday morning, the ministry said.

It said that a Chinese guided missile destroyer was near the submarine.

It is the first time since June last year that Japan has publicly stated that a submarine believed to be Chinese was sailing in the area, according to the ministry.

"The two sides should cherish the hard-won peace and stability in the South China Sea, place the maritime issues at an appropriate position in bilateral relations...jointly caution and guard against the interference and instigation from forces outside the region," the Chinese Foreign Ministry quoted Wang as saying during the meeting.