Yuya Osako netted the only goal Tuesday as Japan got their 2022 World Cup qualifying campaign back on track with a 1-0 victory over China.

The win at Doha's Khalifa International Stadium earned Hajime Moriyasu's men their first points of the final Asian qualifying phase following a shock 1-0 loss at home to Oman in their opening Group B clash. 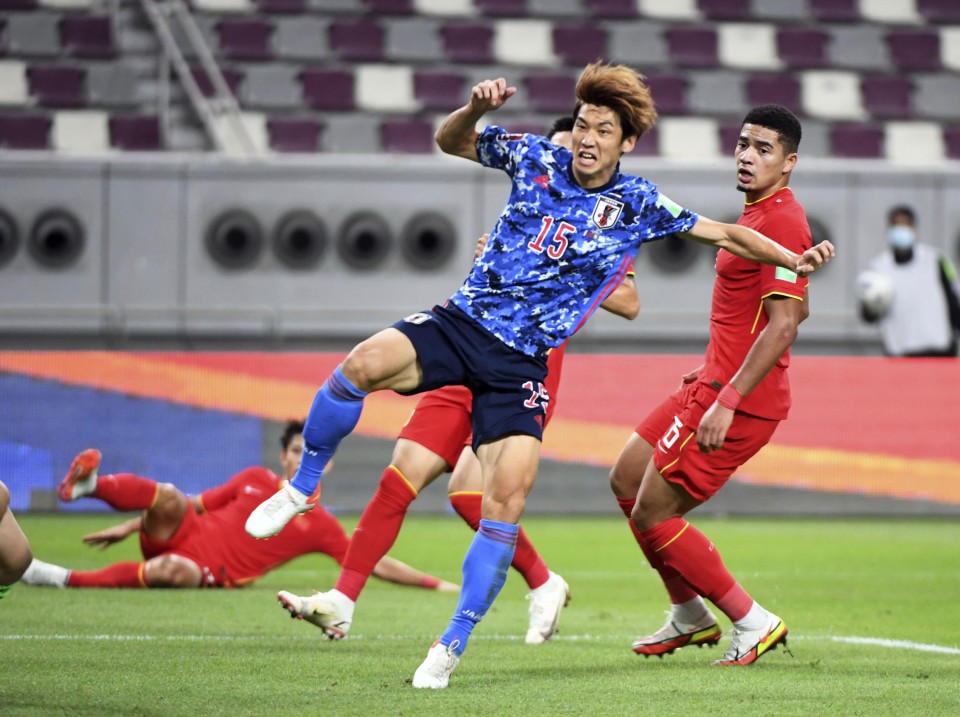 Japan striker Yuya Osako (front L) scores a goal in Doha on Sept. 7, 2021, in the first half of a World Cup football final-round qualifier against China. (Photo courtesy of Japan Football Association)(Kyodo)

The Samurai Blue dominated the contest at one of the venues for next year's World Cup, but could only convert the one chance, when Vissel Kobe forward Osako volleyed home off a cross from winger Junya Ito in the 40th minute.

Moriyasu credited his players for bouncing back with a positive attitude following last Thursday's disappointing loss to Oman at Panasonic Stadium.

"The players were determined to rebound and it created a good energy for the match against China. They won with hard work and smart play," Moriyasu said.

Japan were aggressive from the outset and nearly took the lead in the 23rd minute when Takefusa Kubo lashed a shot from the right of the box into the opposite upright.

Mallorca playmaker Kubo was in the thick of the action again shortly before halftime when he sparked a Japanese attack that culminated in Osako hitting the post from close range.

Osako made no mistake moments later, however, when he flew through the air to connect with a cross from the right by Genk speedster Ito.

"I spoke with Junya before the match and he played the ball the way we planned. It ended up being a good goal," Osako said.

Li Tie's Chinese side did not manage a shot on target throughout the tie, which was moved to the neutral site because of travel restrictions in China stemming from the coronavirus pandemic.

Captain Maya Yoshida said Japan nevertheless needed to do a better job of pressing home the advantage after pinning China inside their own half for much of the match.

"While we got the three points for the win, there were still a lot of areas needing improvement. It was still close and I had hoped we could score another goal," Yoshida said.

Japan will continue their bid to qualify for a seventh consecutive World Cup away to Saudi Arabia on Oct. 8.