The president of the Tokyo Games organizing committee said Monday she is "proud" of Japan having hosted the Olympics and Paralympics despite challenges posed by the COVID-19 pandemic.

Speaking at a press conference a day after the closing of the Paralympics, Seiko Hashimoto said the organizers held the Tokyo Games after a one-year postponement without major problems and with an emphasis on the safety of all participants and the Japanese public. 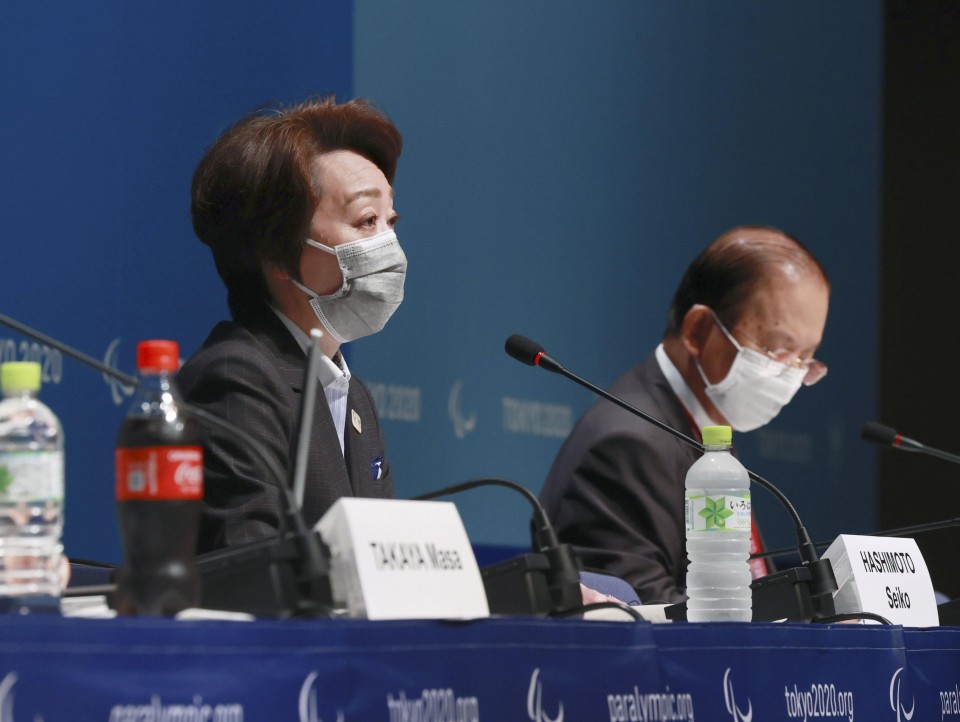 Seiko Hashimoto (L), president of the Tokyo Olympic and Paralympic organizing committee, and Toshiro Muto, CEO of the committee, attend a press conference in Tokyo on Sept. 6, 2021, a day after the closing ceremony of the Paralympic Games, wearing masks for protection against the coronavirus. (Kyodo) ==Kyodo

"I am proud of (Japan) having hosted the Olympics and Paralympics, the first global events in the world since the pandemic, and pass the baton to Paris," Hashimoto said, in reference to the host city of the next Summer Games in 2024.

Asked whether she thought the games were successful, she said, "As we were not able to host the Tokyo Games in a complete form, I cannot say that they were a 100 percent success."

"I think history will determine whether they were a success or not."

The Olympics and the Paralympics featured a total of about 15,000 athletes from around the world, but were staged under extraordinary measures to prevent the spread of the novel coronavirus.

Most competitions were held without spectators at venues located in Tokyo and several other prefectures. Participants were confined to the athletes' village and sports venues, and those from abroad were required to leave Japan soon after their final events.

Since the Olympics opened on July 23, the number of new COVID-19 cases in Tokyo and other parts of Japan hit record highs multiple times, sparking concerns that the games may have led the public to underestimate the severity of infections.

Chief Cabinet Secretary Katsunobu Kato told a separate press conference that Japan was able to "fulfill its responsibilities as the host country" and had held the Olympics and Paralympics safely.

"Due to the efforts of many people, including games' officials, volunteers and medical workers, we were able to close a safe and secure Tokyo Olympics and Paralympics," he said.

Kato said there has not been a single case of infection that spread to the Japanese public from games-related personnel.

Separately, Toshiro Muto, CEO of the organizing committee, said the committee will likely hold discussions with the Tokyo metropolitan government and the Japanese government over how to make up for losses related to the cancellation of ticket sales.

Before organizers decided to bar spectators at most venues, they had estimated they would chalk up a total of 90 billion yen ($819 million) from ticket sales.

"The basic policy is for the host city to shoulder (the losses)," Muto said. "But a more specific decision will be made after talks" involving the three parties.

The Tokyo Olympics closed on Aug. 8 after staging 33 sports.

At the Paralympics that opened on Aug. 24, about 15,300 students watched competitions at venues as part of a government-backed educational program, the organizing committee said.

While the Tokyo Games have closed, the northern city of Sapporo is aiming to host the 2030 Winter Olympics. Hashimoto, an Olympian-turned-lawmaker, said she is willing to head the organizing committee if Sapporo wins the hosting rights for what would be its second Winter Games.