The four candidates running to become the next Japanese prime minister made their last-minute appeals for support on Tuesday, a day before what looks set to be a tightly contested ruling party presidential election.

The election of the Liberal Democratic Party leader will likely end up in a run-off between vaccination minister Taro Kono and former Foreign Minister Fumio Kishida as the first round of voting is not expected to deliver a decisive winner with majority support, according to a Kyodo News survey.

The next leader will replace Prime Minister Yoshihide Suga, who serves as president of a ruling party that has been struggling to shore up an economy battered by measures implemented to slow the spread of COVID-19. 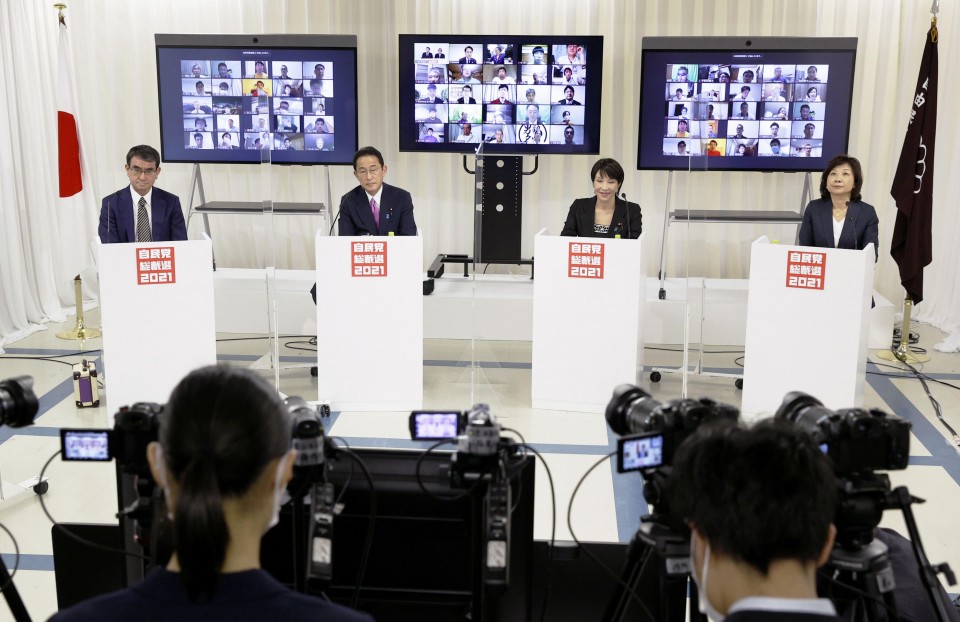 The four candidates running in the presidential election of Japan's ruling Liberal Democratic Party, (from L) Taro Kono, Fumio Kishida, Sanae Takaichi and Seiko Noda, take part in the second day of an online debate with party members and citizens at the LDP's headquarters in Tokyo on Sept. 24, 2021. (Kyodo) ==Kyodo

The public, meanwhile, is seeking leadership skills and accountability from the new leader, qualities judged to be lacking in Suga.

"Until vote-counting is over, we can never be sure what will happen. I will give it my all and continue to fight to the end," Kishida told members of the intraparty group that he leads.

The winner in Wednesday's election will become the public face of the LDP in the lower house election this fall, a factor that has made some young lawmakers cautious about who to back in the race as their future is also at stake.

Two of the four contenders are women -- former internal affairs minister Sanae Takaichi and former gender equality minister Seiko Noda -- and all have largely turned to virtual meetings to rally support during less than two weeks of campaigning held under a COVID-19 state of emergency declared for Tokyo and other areas.

After leading efforts to inoculate the population to rein in COVID-19 cases, Kono said one has to have the ability to "thrust ahead" in responding to the pandemic.

"I'm the only one (in the race) who can do it," Kono said during a press conference following a Cabinet meeting.

A maverick who is popular among the public, Kono is one of the leading candidates garnering support from relatively young LDP lawmakers, and rank-and-file party members -- all of whom have a vote in the election.

The soft-spoken Kishida, who heads the LDP's liberal-leaning faction, has the backing of many veteran lawmakers and is making his second bid to become party chief. But some view him as lacking wider public appeal.

Backed by former Prime Minister Shinzo Abe, Takaichi is expected to receive votes from hawkish nationalists within the LDP, while Noda, who joined the race at the last minute, has been scrambling to broaden her support base.

The influence of LDP factions has also come under the spotlight as many have decided to allow their members the freedom to choose who to vote for, making the outcome unpredictable.

That is different from when Suga was elected about a year ago when major LDP factions were united in their support of the then chief Cabinet secretary, the right-hand man of Abe who stepped down due to ill health.

Takaichi met with Secretary General Toshihiro Nikai, the LDP's No. 2 who also leads a major faction, at the party headquarters in an apparent bid to seek support.

Opinion polls show economic policy should be of the highest priority for the next prime minister and the candidates spent hours explaining how their coronavirus fallout response would be different from each other and the Suga administration.

They are on the same page over the need for constitutional reform but divided over whether to allow married couples to have separate family names.

Kono is promising to reform the pension system in Japan, one of the world's fastest-aging nations, and promote digitalization. But he is perceived as having walked back his stance on nuclear power to allow the restart of plants taken offline amid safety concerns following the 2011 Fukushima Daiichi accident.

Kishida, a moderate but long considered a fiscal hawk, is pledging to make sure ordinary people can enjoy the benefits of growth under what he describes as a new form of capitalism.

Takaichi has named her policy mix "Sanaenomics," focusing on bold monetary easing and investment in crisis management and growth areas.

Takaichi regularly visits Yasukuni Shrine, a controversial Shinto shrine in Tokyo that has become a source of diplomatic friction with China and South Korea as it honors convicted war criminals along with millions of war dead. She has said she would continue to visit as leader.

Noda, who struggled to garner the necessary nominations from 20 LDP lawmakers to join the race, is placing her priority on care for the vulnerable such as children and people with disabilities.

The LDP is expected to have a new president elected Wednesday afternoon and parliament is scheduled to elect him or her as prime minister during an extraordinary session on Oct. 4.