Japan's Nikkei stock index ended sharply lower Tuesday with its biggest one-day point decline in three months, in a global market rout on concerns that a potential default by a giant Chinese property developer could lead to a slowdown in the global economy. 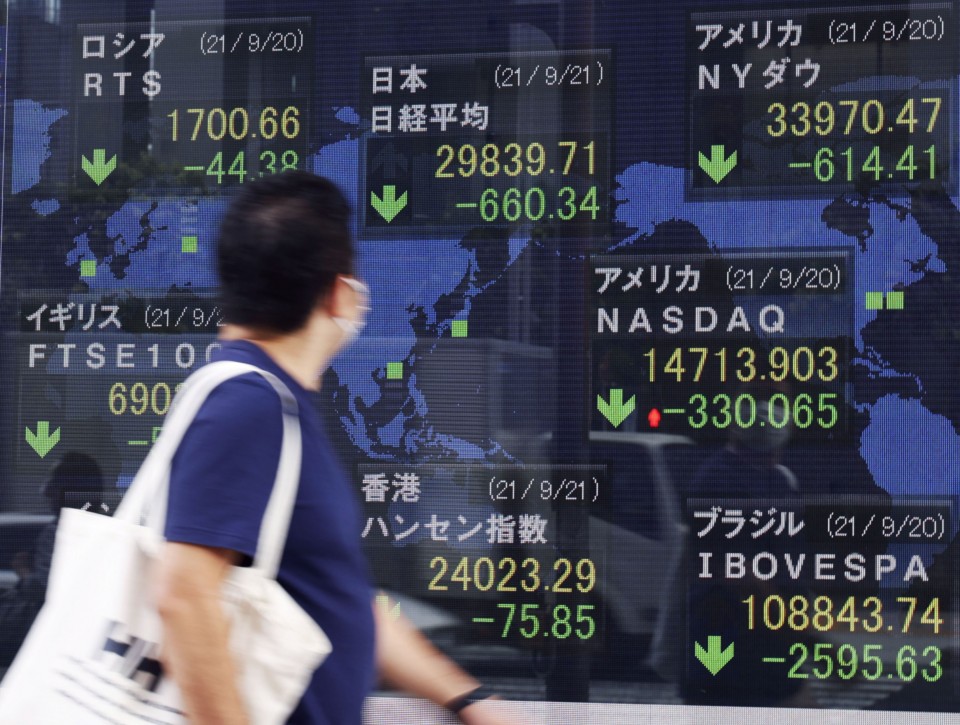 A financial screen in Tokyo shows a large decline of the Nikkei (top C) and various other stock market indexes on Sept. 21, 2021. (Kyodo)

Decliners were led by iron and steel, machinery and marine transportation issues.

Plunges in Japanese stocks followed drops in U.S. and European equities on Monday amid growing fears that China's debt-laden property giant Evergrande Group could go into default as a payment deadline looms this week, brokers said.

Some other Asian markets finished higher, with Chinese markets such as in Shanghai and Shenzhen closed for a national holiday.

Japanese stocks remained weak throughout the day, with the benchmark Nikkei ending below the 30,000 mark for the first time in nearly two weeks.

The Evergrande crisis "raised the risk of a slowdown in the Chinese economy and could make it difficult for (global) companies in the country to expand their business," said Makoto Sengoku, senior equity market analyst at the Tokai Tokyo Research Institute.

Sengoku added investors are closely watching for any sign of intervention by Beijing to stem possible spillover risks to the global economy.

Some market participants were awaiting what the Federal Reserve and the Bank of Japan will say about Evergrande's impact when their two-day policy meetings end Wednesday.

"An Evergrande default is expected to have a limited impact on the U.S. financial system, unless the crisis has ripple-through effects on other real estate companies," said Yutaka Miura, senior technical analyst at Mizuho Securities Co.

Tokyo stocks had been lifted sharply and hit their highest levels in 31 years last week in anticipation of fresh stimulus measures under a new government to be formed after Prime Minister Yoshihide Suga decided to resign amid plunging public support.

In the exchange market, the U.S. dollar remained weak at around the mid-109 yen level in Tokyo after the Japanese yen, perceived as a safe-haven asset, was sought in New York overnight amid concerns about the prospects for China's real estate market.

The bellwether 10-year Japanese government bond was untraded throughout the day as investors sat on the sidelines to await the Fed's policy-setting meeting in which the U.S. central bank will decide on potentially tapering its pandemic-era stimulus.

On the First Section, declining issues outnumbered advancers 1,942 to 218, while 27 ended unchanged.

Shares sensitive to economic fluctuations, such as shippers and steelmakers, were also weak amid uncertainty over global growth.