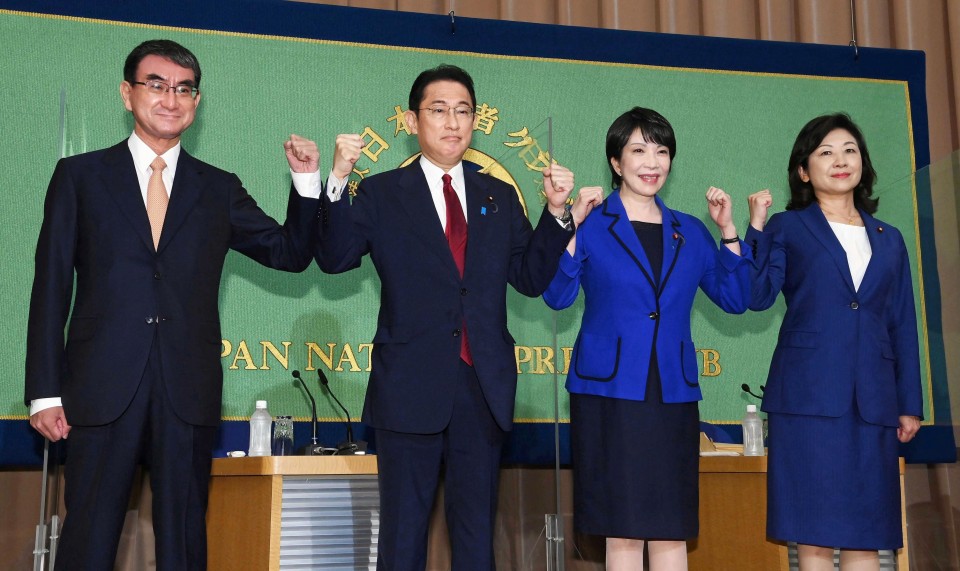 48% of LDP members see Kono as most fit to be Japan PM: Kyodo poll

TOKYO - Vaccination minister Taro Kono is viewed by 48.6 percent of the ruling Liberal Democratic Party's members as most suitable to be party leader and effectively Japan's next prime minister, a Kyodo News poll showed Saturday.

TOKYO - Typhoon Chanthu weakened into an extratropical cyclone Saturday after it traveled off the Pacific coast of central and eastern Japan and pounded western regions, leaving at least six people injured amid strong winds.

The Japan Meteorological Agency forecast heavy rain will continue through early Sunday for the Kanto-Koshin region including Tokyo. The agency continues to warn of the risks of landslides, flooding and high waves.

WASHINGTON - President Joe Biden on Friday called on world leaders to join the United States and the European Union in a commitment to reduce global methane emissions by at least 30 percent by 2030 as part of efforts to tackle the climate crisis.

Many announced their support for the "Global Methane Pledge" to be launched at the upcoming U.N. climate change conference, also known as COP26, to start late next month in Glasgow, Britain, the White House said in a summary of the virtual meeting of a forum of major economies and greenhouse gas emitters.

LDP's Noda calls for vaccinating ages 11 and under

TOKYO - Seiko Noda, a candidate to succeed Japanese Prime Minister Yoshihide Suga as leader of the ruling Liberal Democratic Party, called Saturday for COVID-19 vaccines to be administered to children aged 11 and under.

The health ministry currently approves shots developed by Pfizer Inc. and Moderna Inc. for people aged 12 and higher. The vaccine created by AstraZeneca Plc is also available for ages 40 and up, and people allergic to the other shots.

WASHINGTON - The U.S. military on Friday admitted that a drone strike it carried out last month in Afghanistan's capital Kabul killed as many as 10 civilians, including seven children, and called the attack a "tragic mistake."

The Aug. 29 strike, which destroyed a vehicle initially believed to have been loaded with explosives, took place in the final stages of the U.S. troop withdrawal from Afghanistan. It was intended to stop an "imminent" threat to the international airport in Kabul, where troops were evacuating civilians.

GENEVA - Work-related diseases and injuries are responsible for nearly 2 million deaths every year, according to a report published Friday by two U.N. agencies.

The first joint study by the World Health Organization and the International Labor Organization on job-related diseases and injuries from 2000 to 2016 found that most deaths were caused by respiratory and cardiovascular diseases, with 1.9 million lives lost in 2016.

WASHINGTON - U.S. President Joe Biden will convene a virtual meeting of world leaders next Wednesday to enhance efforts to tackle the coronavirus pandemic such as through equitable access to vaccines, the White House said.

At the so-called COVID-19 summit, which is to take place on the margins of the U.N. General Assembly, Biden is expected to call on countries around the world to commit to vaccinating 70 percent of the world's population by next September, U.S. media have reported.

TOKYO - Lone yokozuna Terunofuji outwrestled rising No. 3 maegashira Kotonowaka on Saturday to finish the Autumn Grand Sumo Tournament's first week as the outright leader and only competitor with a perfect 7-0 record.

The newly promoted grand champion displayed his outstanding strength and tactical acumen as he forced talented youngster Kotonowaka out of the ring in the final bout of Day 7 at Ryogoku Kokugikan.