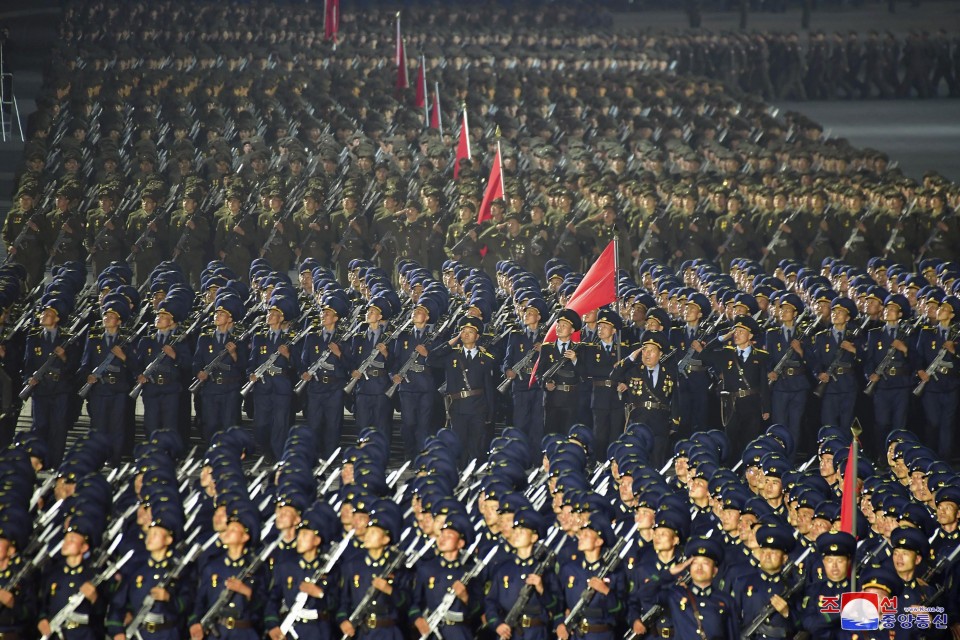 A parade of paramilitary and public security forces is held at the Kim Il Sung Square in Pyongyang in the early hours of Sept. 9, 2021. (KCNA/Kyodo)

TOKYO - Japan's government decided Thursday to extend the COVID-19 state of emergency again for Tokyo and many other areas as hospitals remain stretched despite a falling number of infections, while it adopted a plan to ease restrictions once most of the population has been vaccinated.

The state of emergency covering 21 of Japan's 47 prefectures had been slated to end Sunday but will remain in place through Sept. 30 in 19 prefectures, including Hokkaido, Aichi, Osaka and Fukuoka.

TOKYO - Taro Kono, the minister in charge of Japan's vaccination efforts, is set to announce his bid to succeed Prime Minister Yoshihide Suga at a press conference Friday, people familiar with his thinking said Thursday.

TOKYO - Japan Airlines Co. said Thursday it plans to raise some 300 billion yen ($2.7 billion) to strengthen its financial standing and secure operating funds for the future as air travel demand remains weak amid the coronavirus pandemic.

The airline, known as JAL, said it will raise the funds through subordinated loans and bonds to avoid share dilution, while sources familiar with the matter said the company would use part of the funds to invest in green technology to cut greenhouse gas emissions.

TOKYO - A Japanese lawmaker who was found guilty of receiving bribes linked to the government's project to build casino resorts said Thursday he was wrongly convicted and the jail term he received earlier this week was unacceptable.

"The case was a false accusation made up by prosecutors. (The ruling) is totally unacceptable," said Tsukasa Akimoto, former Liberal Democratic Party member who is on bail, having been sentenced to four years in prison by the Tokyo District Court on Tuesday.

The move came as President Xi Jinping has been bolstering measures against obscene and violent content and those breeding unhealthy tendencies, such as money-worship, to boost youth development, the official Xinhua News Agency said Wednesday.

TOKYO - The International Olympic Committee will exclude North Korea from the 2022 Beijing Winter Olympics as punishment for its no-show at the Tokyo Games, IOC President Thomas Bach said Wednesday.

For its decision to skip the Tokyo Olympics and Paralympics over COVID-19 safety concerns, the North Korean National Olympic Committee will also permanently forfeit payments that had been withheld by the IOC due to international sanctions on the country, Bach said.

BEIJING - North Korea staged a military parade early Thursday to celebrate the 73rd anniversary of the country's founding, state-run media reported, coming at a time when leader Kim Jong Un has been struggling to cope with the nation's worst food crisis in more than a decade.

The military parade was North Korea's first since January this year, when the country held the first congress of the ruling Workers' Party of Korea in nearly five years. The anniversary parade is believed to be aimed at generating national unity, regional experts say.