The two companies see the new services as playing a useful role in supporting local health care provision and disaster preparedness as well as expanding community infrastructure on remote islands and other far-flung areas. At the same time, the initiatives will help them promote management diversification and strengthen profitability as the coronavirus pandemic continues to take a toll on their overall business performances. 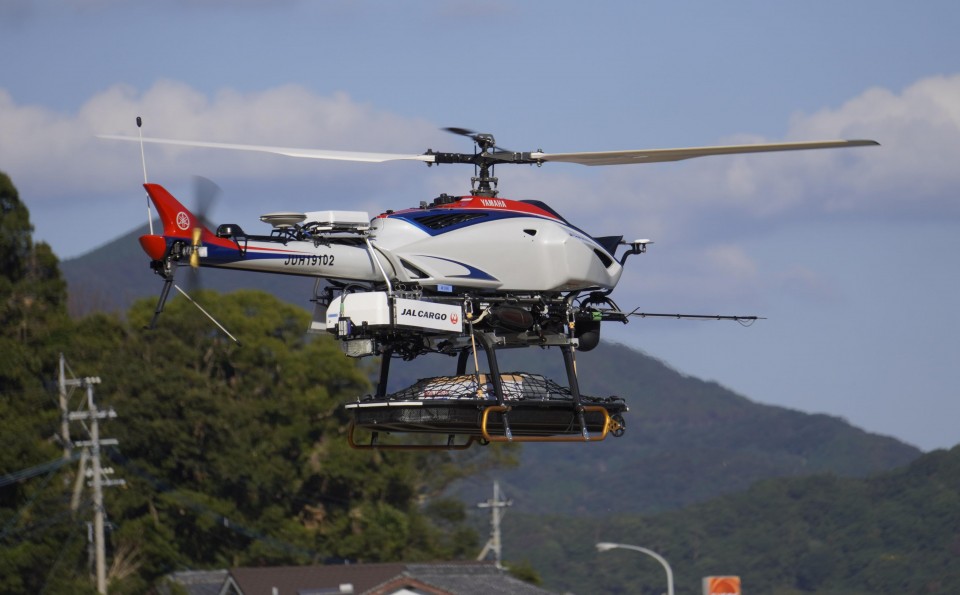 ANA Holdings, the parent of All Nippon Airways Co., conducted a trial run jointly with a pharmaceutical company and other concerns in March. Footage that it released shows a drone carrying a package of medical supplies from one island to another among Nagasaki Prefecture's Goto Islands in southwestern Japan at a speed of around 100 kilometers per hour.

The drone, whose propellers rotate at high speed before the 8-kilogram body slowly rises off the ground, took about 10 minutes one way to reach its destination, compared with 45 minutes needed by conventional delivery using a ship-and-land route.

In Goto and other remote areas across Japan, residents struggle to obtain food products and medicines due to a shortage of delivery workers. ANA Holdings has been testing the service in various areas since 2018 to launch it commercially in the near future. 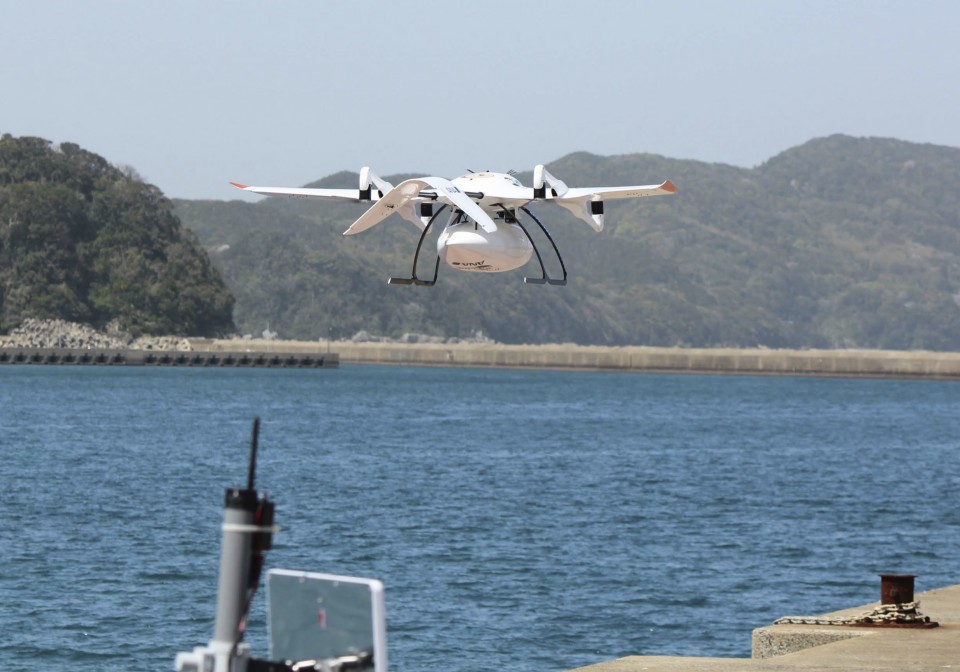 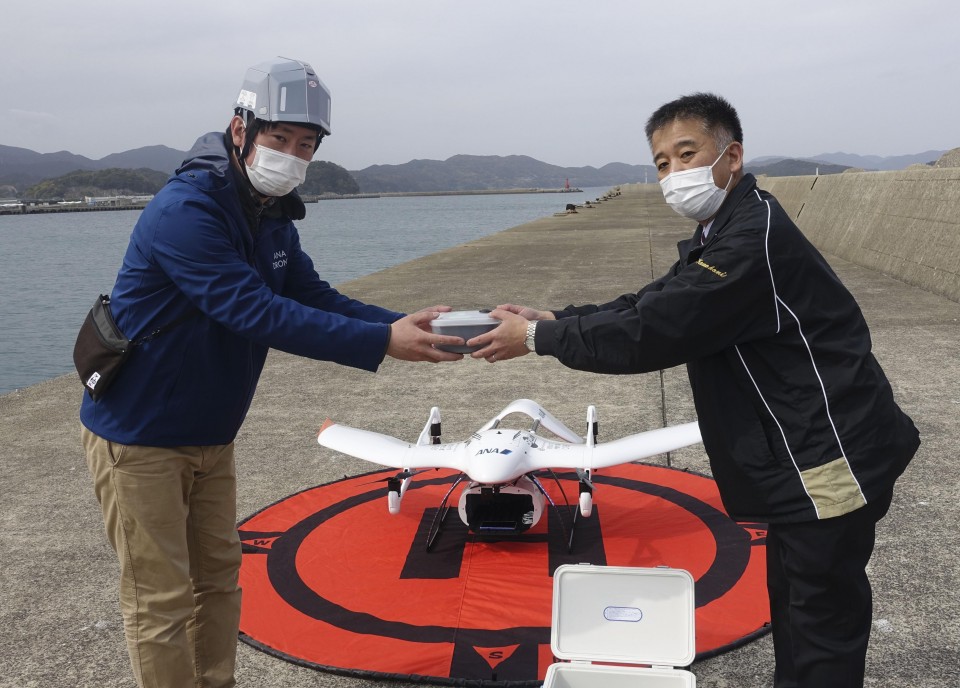 The company has formed a project team of 15 members for the new service, including pilots, flight mechanics, and other workers using their expertise. Passenger aircraft operation managers, for instance, set flight routes according to weather patterns, while flight mechanics prepare maintenance manuals.

Passenger transport and other aviation services are ANA Holding's bread and butter, but its principal earnings have dropped sharply amid the coronavirus pandemic, making expansion of its non-aviation operations an urgent task.

Indeed, the drone project "has made headway due to the pandemic," an official of the company said.

An amendment to the civil aviation law has eased the transition. Current regulations ban drone flights beyond the operator's visual line of sight in areas where people live or work. However, the government has made regulatory adjustments under the amendment that will allow ANA Holdings to begin a commercial drone service in such areas beginning in fiscal 2022.

JAL began to increase the use of drones three or four years ago following upper management's insistence that it become less dependent on passenger flights.

Planning to begin the drone-based service of delivering goods in fiscal 2023, JAL has already experimented with transporting disaster supplies and blood for transfusions in collaboration with medical institutions and other concerns in Hyogo and Nagasaki prefectures.

In another trial, fresh fish caught off the Goto Islands were carried by a drone to the nearby main island of Kyushu and airlifted aboard a JAL flight from Nagasaki airport to Tokyo to be served at restaurants in the capital the same day. 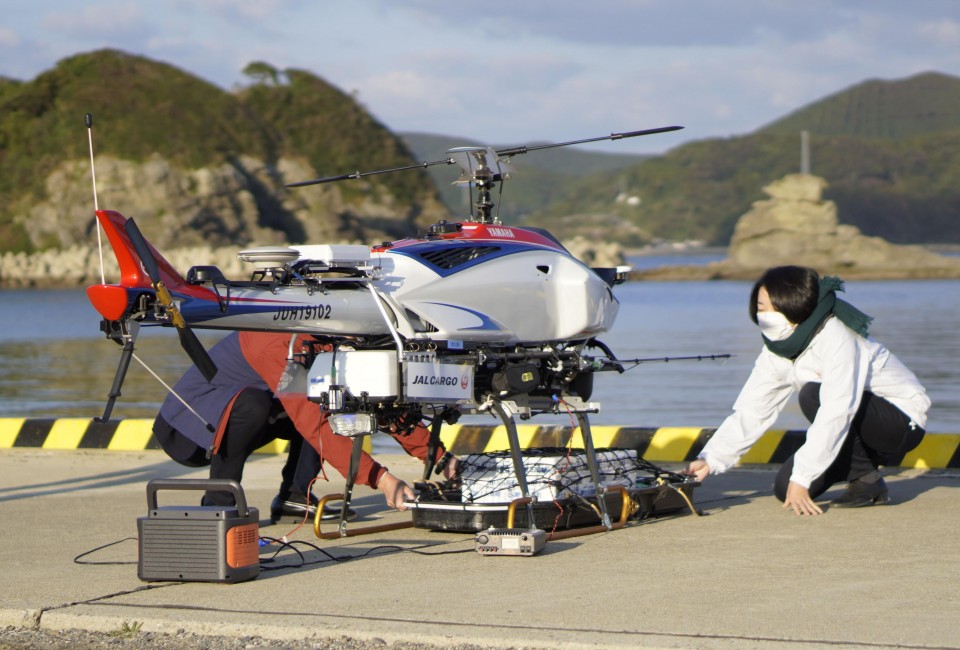 JAL hopes that a similar use of drones to collect produce from remote areas will allow it to begin exporting fresh marine and agricultural products to neighboring countries.

With the use of drones, "we will not only seek to increase our revenue but also offer solutions to local problems," a JAL official said.