Yoshinori Muto scored his first J-League top-flight goal since returning from Europe over the summer, netting the opener as Vissel Kobe beat Shimizu S-Pulse 2-0 away.

The former Newcastle forward's ninth-minute header deflected off defender Akira Ibayashi and squeezed in past the near post at IAI Stadium, with fellow summer signing Yuya Osako, joining from Werder Bremen, providing a cross from the left.

"It feels great. It's really positive as I've returned (to Japan) aiming to get goals and assists that directly influence the result," said the 29-year-old, who last played in the J1 in 2015 with FC Tokyo. 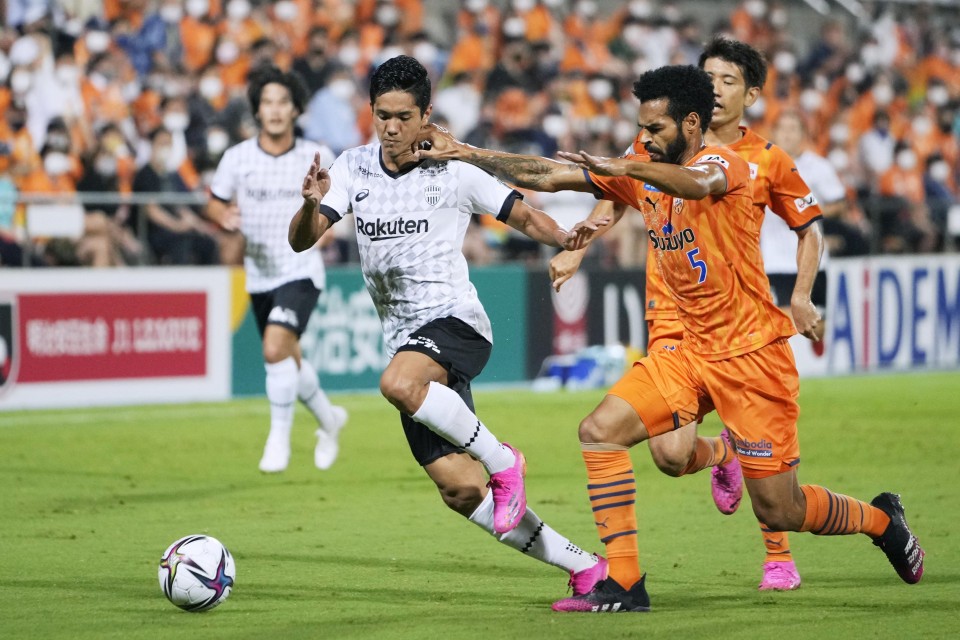 Vissel Kobe's Yoshinori Muto (L) and Shimizu S-Pulse's Valdo vie for the ball during the first half of a J-League football match on Sept. 24, 2021, at IAI Stadium in Shizuoka, central Japan. (Kyodo) ==Kyodo

Osako, who, unlike Muto, remains in the national team fold despite his spell in Europe waning toward the end, made his presence felt with link-up plays, and Muto hopes to strike a better partnership up front with the 31-year-old.

"Osako keeps defenders occupied, and that allows me to be free," Muto said. "We are the ones who need to provide end products, and we'll concentrate on doing that."

S-Pulse had their chances late in the half when Kenta Nishizawa's inswinging cross from the right was met by the head of Thiago Santana, only to be denied superbly by Vissel keeper Hiroki Iikura.

The Brazilian had an even bigger chance just before the break when he peeled away from a marker to meet Teruki Hara's low cross from the right but blazed over from eight meters out. 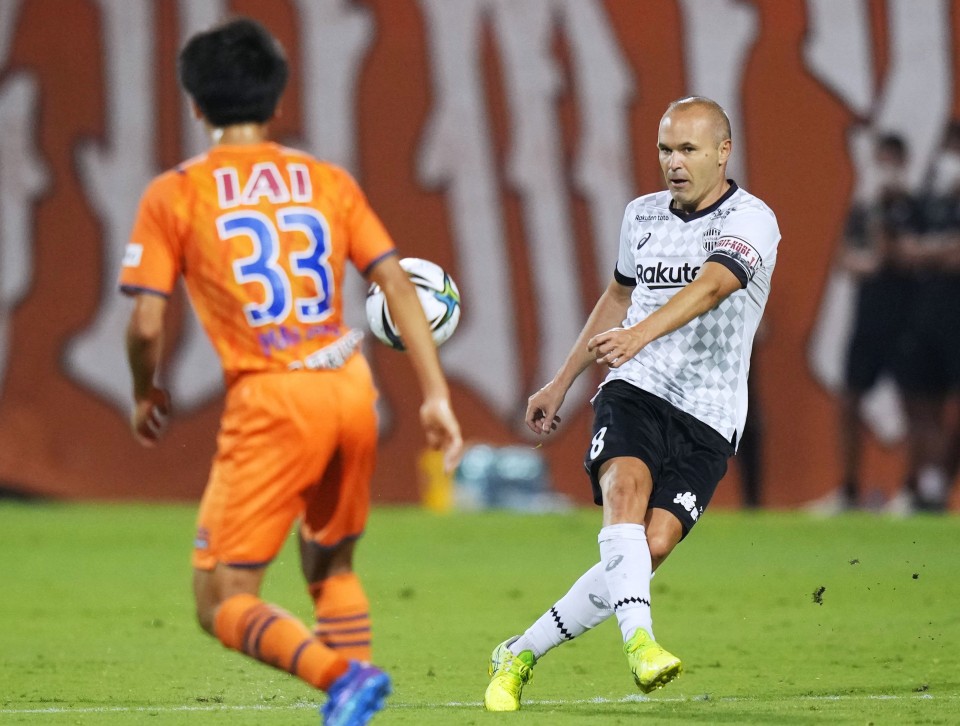 Vissel Kobe's Andres Iniesta (R) passes the ball during the first half of a J-League football match against Shimizu S-Pulse on Sept. 24, 2021, at IAI Stadium in Shizuoka, central Japan. (Kyodo) ==Kyodo

Nishizawa continued to spark things in S-Pulse's attack in the second half and almost leveled six minutes in when he cut in from the left and struck low toward the near post, but the ball hit the foot of the post.

Vissel, who replaced influential Andres Iniesta at halftime for an unspecified reason, scored again in the 87th minute.

Daiju Sasaki, who came on for Iniesta, cut back from the left byline for Reo Osaki, whose tame effort deflected off Daiki Matsuoka, to again wrongfoot keeper Shuichi Gonda.

The win takes Vissel up to third and into an automatic qualification spot for next season's Asian Champions League, while Shimizu are 15th.