All but one member of Hong Kong's revamped Election Committee will be pro-Beijing members, according to official results announced Monday after an election was held under the new Beijing-imposed electoral system aimed at ensuring that only "patriots" govern the city.

The powerful committee with no pro-democracy camp member will be tasked with electing 40 members of the enlarged 90-seat Legislative Council in December, as well as picking the city's new chief executive in March.

Around 4,400 voters representing different professions and industries cast their ballots on Sunday to choose around 360 of the 1,500 committee members, with most of the rest already elected uncontested or allocated to ex-officio members. 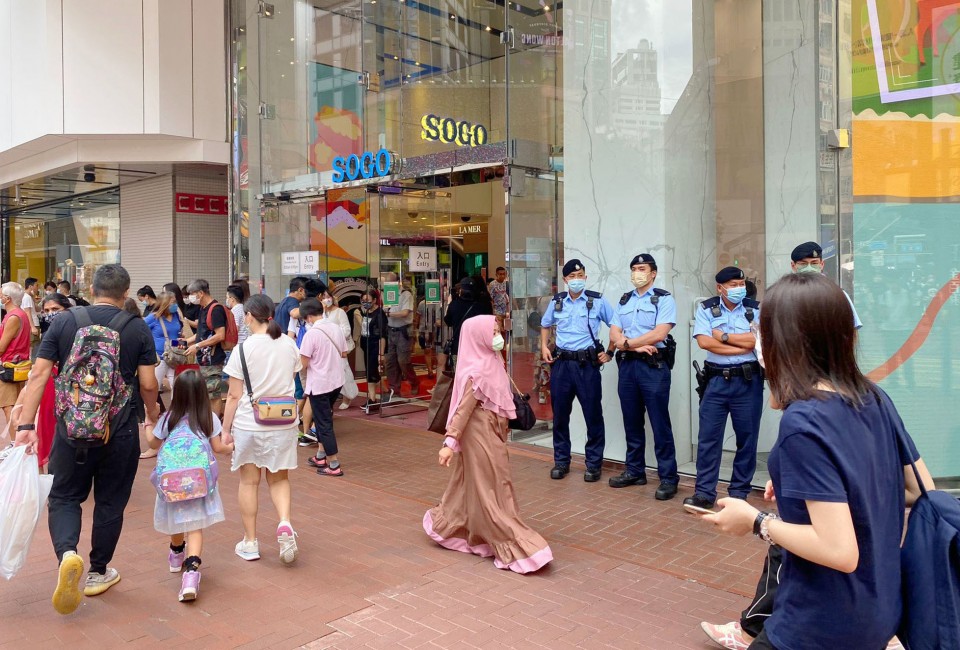 Police officers stand guard at Hong Kong's downtown Causeway Bay as an election for the city's Election Committee is held on Sept. 19, 2021. (Kyodo)

Centrist Third Side party leader Tik Chi-yuen was the only opposition-leaning figure elected, narrowly snagging a seat after drawing lots with two other candidates who received the same number of votes.

Speaking to the press, the former Democratic Party member said that despite his narrow victory that also depended on a bit of luck, the results have proven that there is at least some room for candidates like him.

In a statement, the Hong Kong government said the elections showed the city reaching "a new milestone" in the implementation of the "patriots administering Hong Kong" policy.

"With the new electoral system laying down a solid foundation with the support of the general public, the Government believes that Hong Kong is able to fully and accurately implement the principle of 'one country, two systems' and maintain long-term prosperity and stability," it said.

Hong Kong's legislature in May approved a sweeping electoral overhaul to oust lawmakers deemed unpatriotic to rein in dissent and exclude those considered as being anti-Beijing from the levers of power.

The change in the electoral system followed the 2019 anti-government protests.