Title favorite Terunofuji won a drawn-out battle with komusubi Takayasu to stay one win clear atop the leaderboard Wednesday at the Autumn Grand Sumo Tournament.

The new yokozuna fought patiently in Day 11's final bout at Ryogoku Kokugikan to defeat a troublesome opponent who had won 12 of their 21 past meetings in the top division. 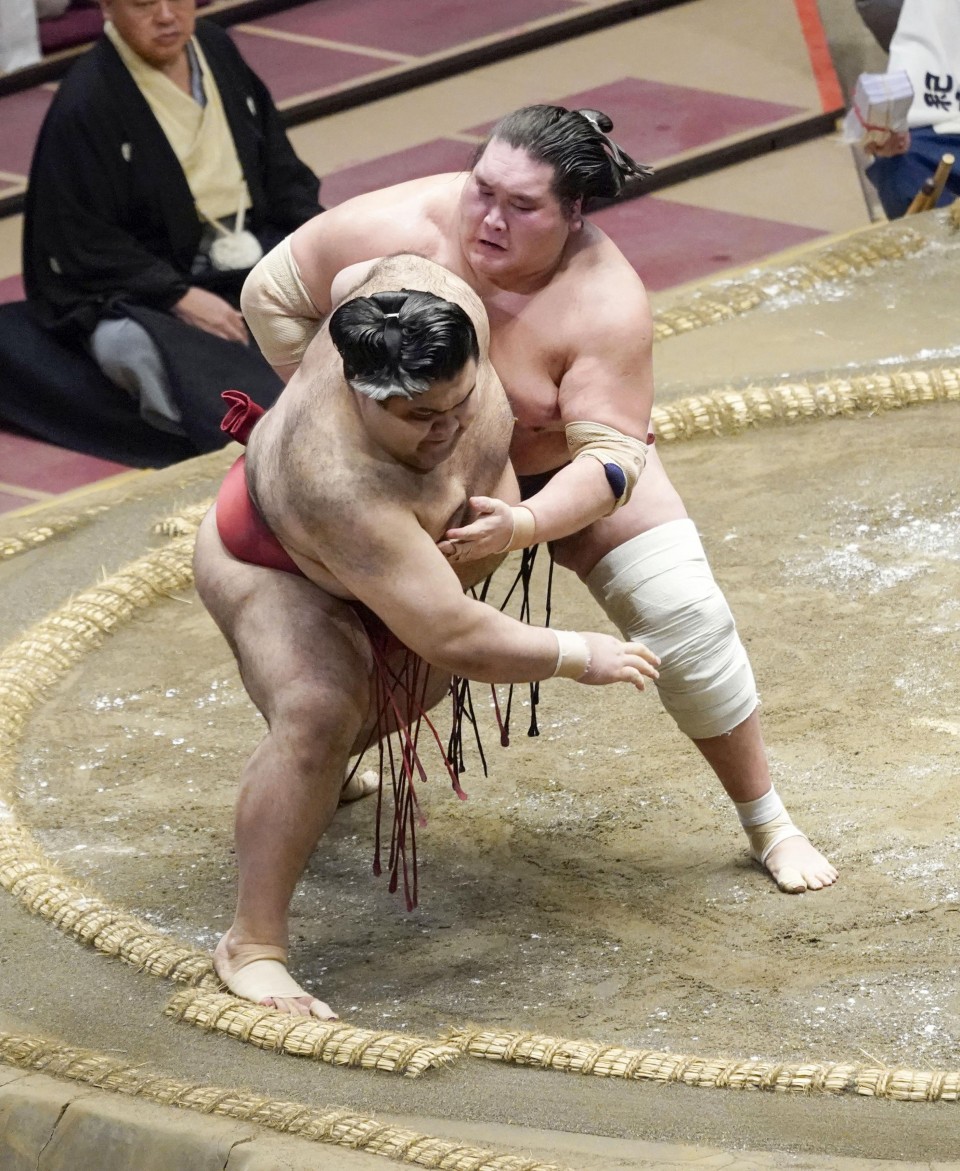 Terunofuji (R) forces out Takayasu on the 11th day of the Autumn Grand Sumo Tournament at Tokyo's Ryogoku Kokugikan on Sept. 22, 2021. (Kyodo)

Following a long stalemate, Terunofuji (10-1) found his opening to shove Takayasu (4-7) to the edge and send him hurtling off the dohyo.

Bidding for his fifth Emperor's Cup, Terunofuji is fighting as the sole yokozuna, with 45-time grand tournament winner Hakuho sidelined after two stablemates tested positive for COVID-19. He will battle sekiwake Meisei on Day 12.

Ozeki Takakeisho (7-4) needs just one more win to keep his place at sumo's second-highest rank after pushing out No. 6 Onosho (8-3).

Competing as a demotion-threatened "kadoban" ozeki following his withdrawal with a neck injury in July, Takakeisho made a horror 0-3 start at this tournament but has since won seven of eight bouts.

After the pair bounced apart at the opening clash, Takekeisho anticipated Onosho's lunge and slapped him down to the clay.

Former komusubi Onosho's defeat leaves No. 10 Myogiryu alone in second place on the leaderboard at 9-2. The 34-year-old Myogiryu continued his impressive performance at the tournament by forcing out No. 15 Ichiyamamoto (3-8).

Ozeki Shodai (8-3) earned his crucial eighth victory in a punishing battle with new sekiwake Meisei (4-7), now on the brink of a losing record in his first tournament at the third-highest rank.

The pair slapped, pulled and shoved each other around the ring before Shodai took Meisei toward the edge and finished the job with an overarm throw.

Sekiwake Mitakeumi (8-3) clinched his fifth consecutive winning record by pushing out No. 4 Daieisho (6-5).

Mitakeumi had the initial momentum and kept powering forward, snuffing out an attempted counterattack from former sekiwake Daieisho, who handed Terunofuji his first loss as a yokozuna on Day 9.

"I wanted to get the winning record a little earlier. I kind of regret losing a couple of bouts," said Mitakeumi, who has still to meet Terunofuji at the 15-day meet.

"I don't think the yokozuna will lose, but I want to stay with him. I'll come up with a solid game plan for when I face him."

Three rank-and-file wrestlers clinched winning records at 8-3, including popular No. 11 Endo, who forced out No. 14 Kaisei (4-7).

"I've been able to stay focused each day. I'll just concentrate on my next bout tomorrow," former komusubi Endo said.

Also among the rank and file, Bulgarian No. 9 Aoiyama (6-5) celebrated his country's Independence Day with a victory over No. 15 Chiyonoo (4-7).