The Association of Southeast Asian Nations said it has seen progress in drawing up a "code of conduct" to avert clashes in the South China Sea between its members and China, as the group on Saturday wrapped up a series of meetings this week.

Erywan Yusof, second foreign minister of Brunei which currently holds the rotating ASEAN chair, told reporters in Bandar Seri Begawan that the meetings between ASEAN and its dialogue partners were productive, referring to an agreement reached by the group and China on the preamble to the code of conduct on the South China Sea. 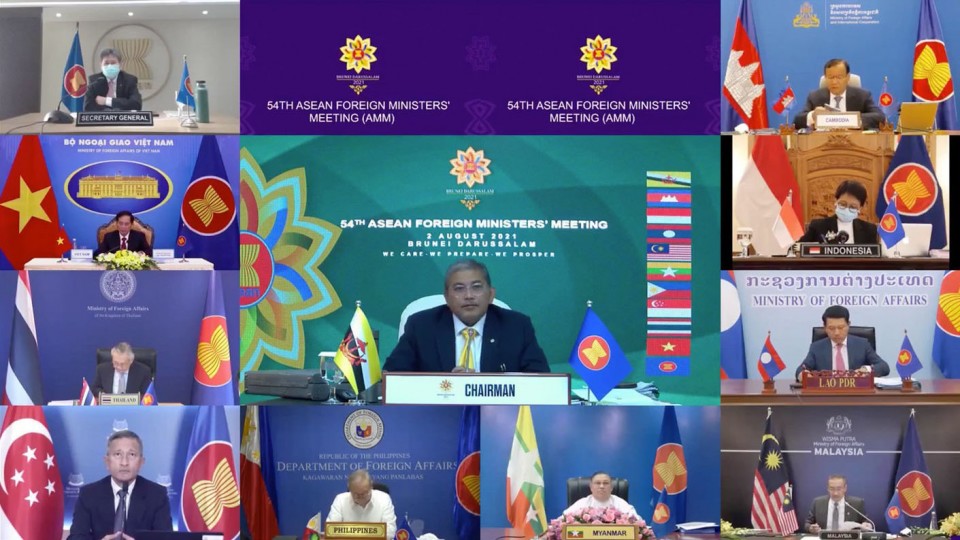 Brunei's Erywan Yusof (C) and other foreign ministers of the Association of Southeast Asian Nations attend an online meeting on Aug. 2, 2021. (Photo courtesy of ASEAN)(Kyodo)

Some ASEAN member states and China have been in dispute over the South China Sea as Beijing has rapidly built artificial islands with military infrastructure in the sea, home to some of the world's busiest sea lanes, claiming sovereignty over almost the entire maritime area.

Erywan, who was appointed as the special envoy of ASEAN to member country Myanmar, where the military seized power six months ago, said he will take up the mission soon.

ASEAN foreign ministers agreed to appoint the Brunei diplomat as the special envoy after Myanmar's junta approved Erywan's appointment during a special online meeting on Wednesday, two days after the ministers held talks without reaching a formal conclusion.

Leaders of the 10-member Association of Southeast Asian Nations agreed in April to send a special envoy to Myanmar in the wake of the Feb. 1 coup that ousted Aung San Suu Kyi's democratically elected government, but months passed without one chosen.