A Japanese teenager on Thursday called for the abolition of nuclear weapons at a U.N. disarmament conference session that highlighted the importance of incorporating the voice of youth in its discussions.

"We must take a big step towards the total elimination of nuclear weapons," said Rio Sasaki, an 18-year-old student at a senior high school in Hiroshima, which, along with Nagasaki, was one of the two Japanese cities devastated by U.S. atomic bombs in the final days of World War II. 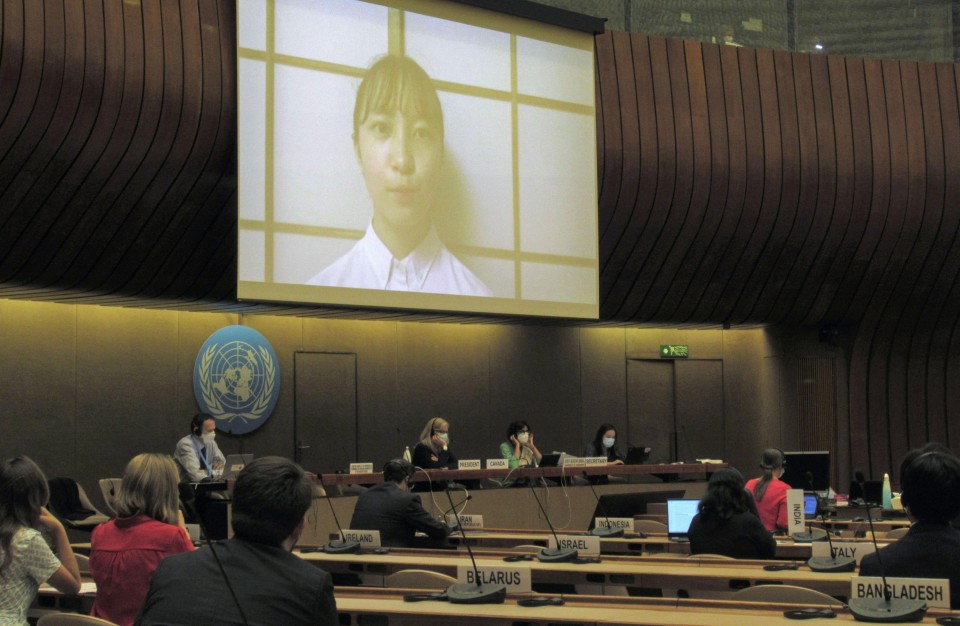 Participants listen to an online video speech by Japanese teenager Rio Sasaki during a U.N. disarmament conference session in Geneva on Aug. 12, 2021. (Kyodo)

Addressing the conference online, she related the physical and psychological pains suffered by her grandmother throughout her life as a victim of the atomic bomb and said that young people like herself bear a strong responsibility to eliminate nuclear weapons.

"I hope the world will respond to our call," she said.

The session, which was dedicated to a discussion on youth and disarmament, was opened by U.N. High Representative for Disarmament Affairs Izumi Nakamitsu.

Nakamitsu highlighted in a video message the huge potential of youth to bring positive change in the world, including in the field of disarmament.

Noting that 40 percent of the world's population is under the age of 25, Nakamitsu said that "inclusiveness is necessary to achieve the ultimate objectives of disarmament, nonproliferation and arms control, and for the effectiveness and sustainability of the agreements that we reach and the work that we do."

Other youths who attended the meeting included those from Canada and Vietnam.

Sasaki is among Japan's so-called high school student peace messengers who are selected each year to convey the messages of the two Japanese A-bombed cities.

The messengers have usually visited the European headquarters of the United Nations in Geneva, where disarmament conferences take place, and submitted signatures that they have collected to push for the abolition of nuclear weapons.

But this year, like last year, they have not been able to travel to Switzerland due to the coronavirus pandemic.