Taliban insurgents say they have captured more provincial capitals in Afghanistan in recent days, bringing the total under their control to nine out of 34 capitals as U.S. troop withdrawals continue.

U.S. President Joe Biden suggested Tuesday his administration does not intend to revisit the decision to withdraw troops from the war-torn country, telling reporters in Washington that Afghan government forces must fight for their own country. 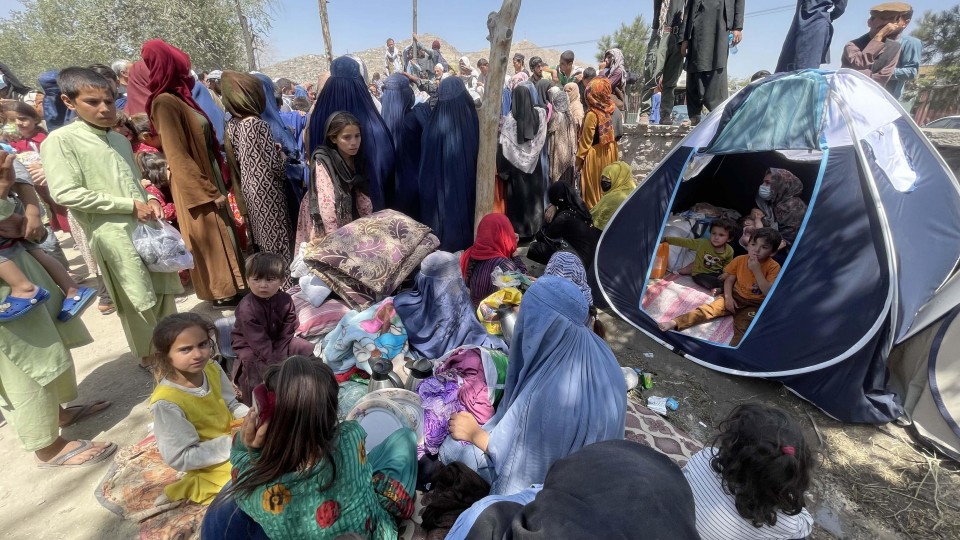 Displaced Afghan families flee northern provinces due to clashes between Taliban and Afghan security as they seek refuge inside a park with harsh conditions in Kabul, Afghanistan, on Aug. 10, 2021.(Anadolu Agency/Getty/Kyodo)

The Taliban have declared their successful captures of provincial capitals for six days in a row until Wednesday, starting with Zaranj, the capital of Nimruz Province in the southwest on Friday.

The situation is continuing to deteriorate as soldiers hit by low morale leave the government forces ahead of the planned completion of the U.S. troop withdrawal by the end of this month.

Most of the provinces whose capitals were overrun by the Taliban in recent days are in the country's north and west.

The insurgents said Wednesday they have newly captured Faizabad, the capital of Badakhshan Province in the northeast.

Pul-i-Khumri is a connecting point on an artery that connects the national capital Kabul and Mazar-i-Sharif, the largest strategic point in the country's north. Major facilities in the provincial capital were captured as security forces withdrew to a government force base in the suburbs, according a local official.

In Farah, the Taliban occupied the governor's house and a prison, among other locations.

Meanwhile, an international conference on intra-Afghan peace was held in Qatar on Tuesday with representatives from the United States, Russia, China and Pakistan as well as the Afghan government.

Abdullah Abdullah, the head of the Afghan government's reconciliation council, called for support from the international community, saying in his speech that the Taliban have broken a promise to accelerate cease-fire talks and caused an unprecedented humanitarian crisis.

The Afghan government and the Taliban issued a joint statement in July saying they had agreed to speed up the talks, but no progress has been made.