On the island of Kyushu, the center of production for Japan's shochu distilled liquor, long-established breweries have started to branch out into the Western spirits of absinthe and gin, making use of the rich variety of local fruits, herbs and other potential ingredients to produce carefully crafted drinks.

While honoring traditional production techniques, the challenge has been to adapt distilling equipment to reach the required level of purity for the alcohol and to select the right raw materials. 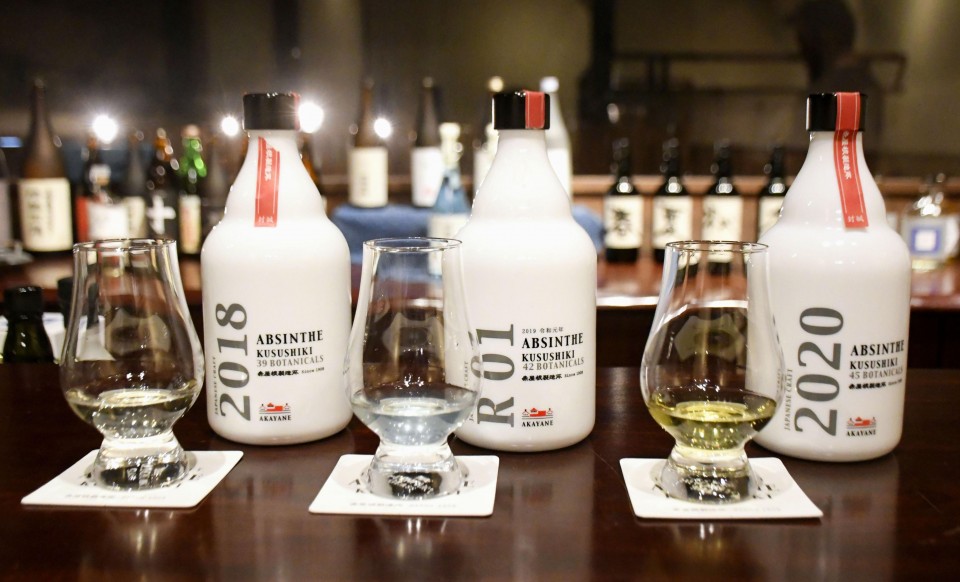 Munehiro Sata, 51, president of Sata Souji Shoten, a brewery founded in 1908 in Minamikyushu, Kagoshima Prefecture, has developed a fascination with absinthe, which was once banned in a number of European countries and the United States due to rumors, which proved unfounded, about its hallucinogenic properties. 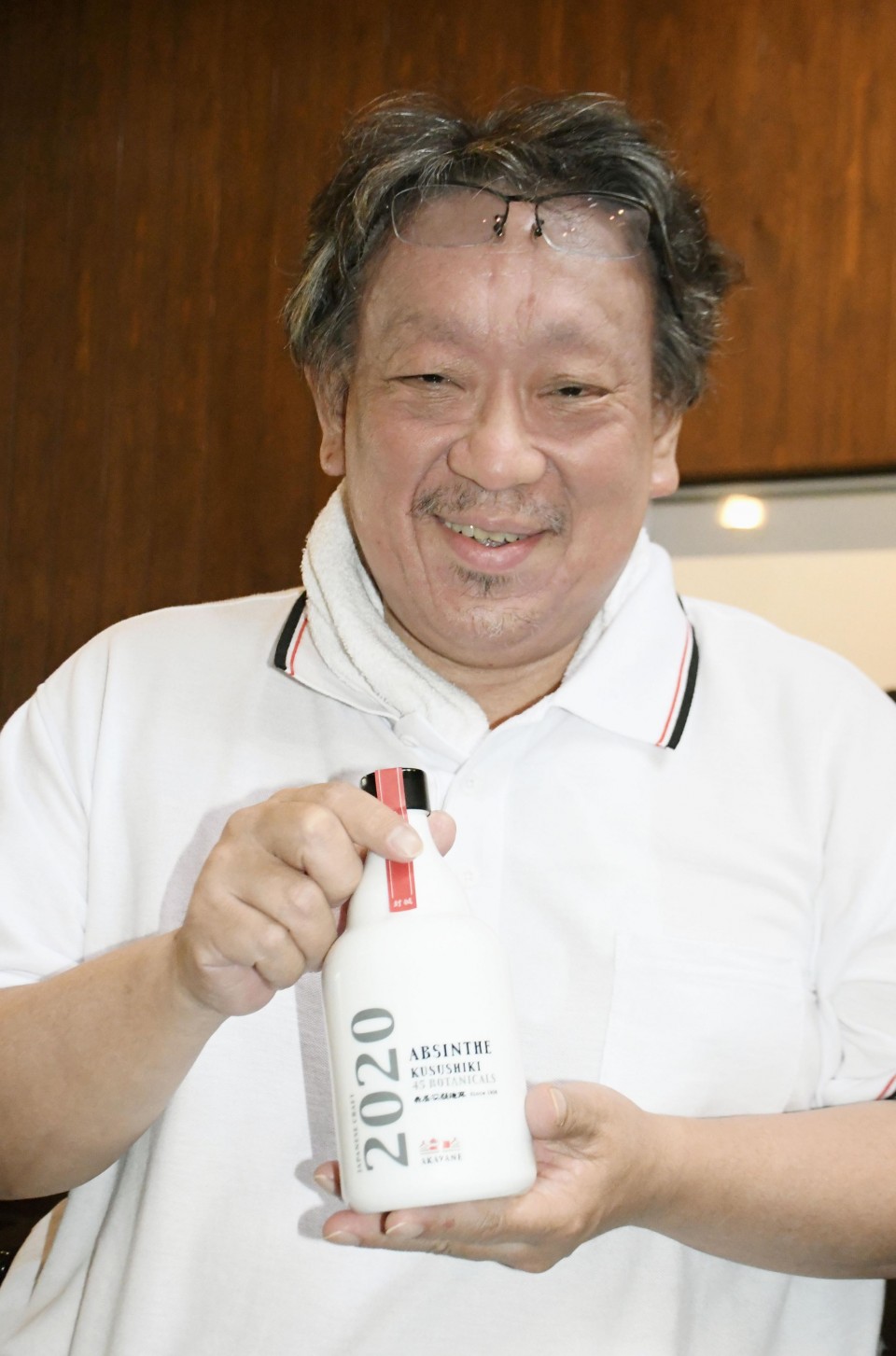 "The complex herbal aroma (of absinthe) attracted many cultural figures, such as (Vincent) Van Gogh and others," Sata said, referring to the Dutch 19th-century painter.

An aniseed-flavored drink, absinthe's main ingredient is wormwood. Sata Souji uses sweet-potato shochu as the base while infusing the drink with a total of more than 40 botanicals in all, also including Sakurajima tangerines, kelp, and Japanese "ume" apricots. The company boasts that it produces its wormwood without fertilizers or pesticides.

Reflecting the fact that aniseed was traditionally used as a medicinal herb, Sata Souji's brand takes the name "Absinthe Kusushiki," with "Kusushiki" coming from the roots of the Japanese words for "medicine" and "mysterious."

For Sata, part of what gives the drink its mysterious character is the way that when water is added, it instantly turns milky white.

"It's like how a smile breaks out filling the instant when you meet a person you haven't seen in 10 years," he said. 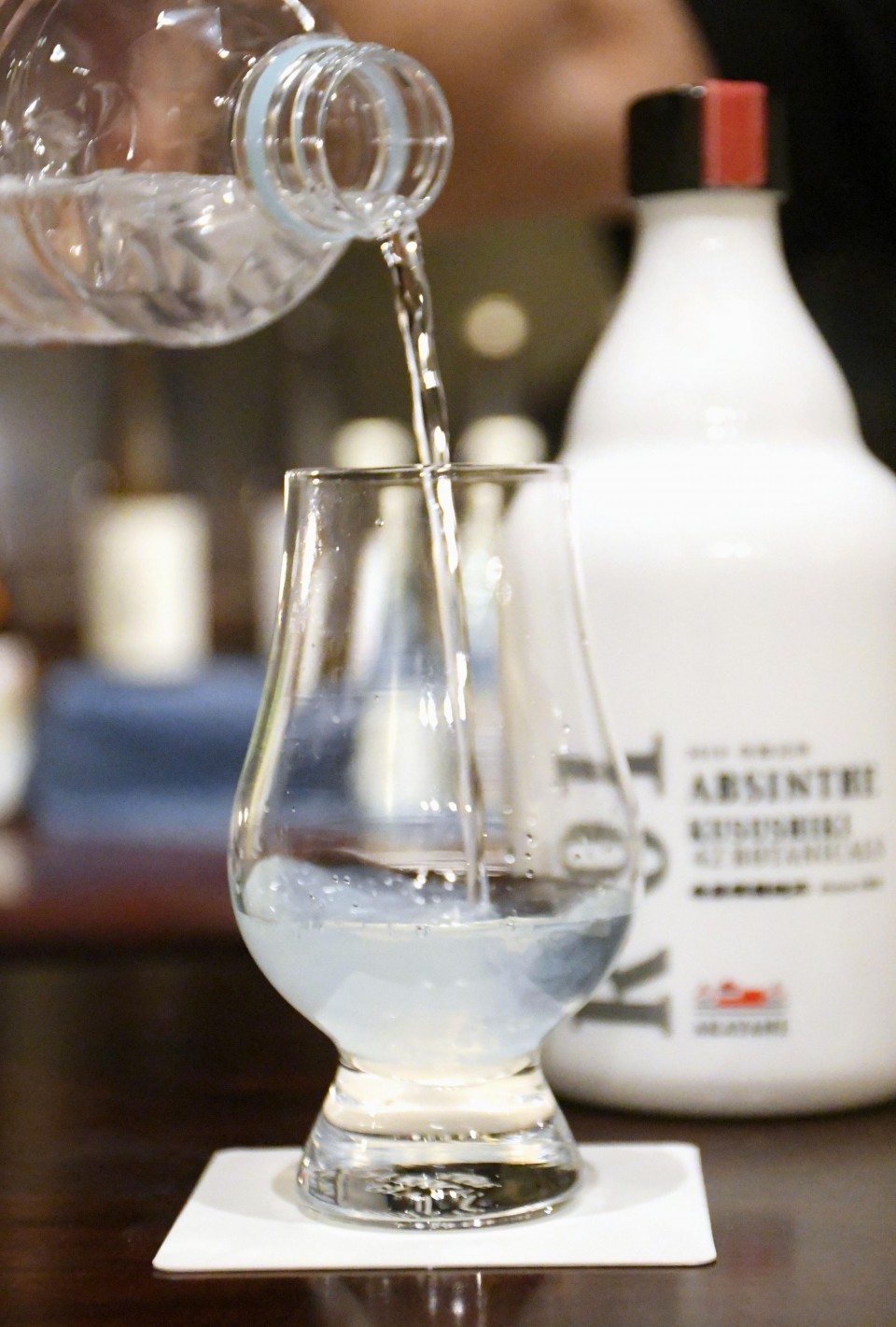 Sata had an awakening to Western-style spirits while visiting Europe in 2000 to sell his shochu products. He recalled his shock at coming across a spirit that used ginger as a main ingredient. He ended up visiting roughly 100 distilleries there.

A common refrain he continued to hear from nearly all of the local brewers during his trip was that success in achieving a specific flavor depended on using the right distillery equipment. It opened Sato's eyes to what he could achieve.

He imported four distillery machines from Europe, and would pause the brewing process, which takes about six hours, every 90 seconds to test the flavor, aroma, and other aspects of the spirit.

Aside from absinthe, he has developed over 20 spirits with ingredients particular to Japan, such as Japanese peppers and "shichimi-togarashi," a mixture of red peppers and other spices. 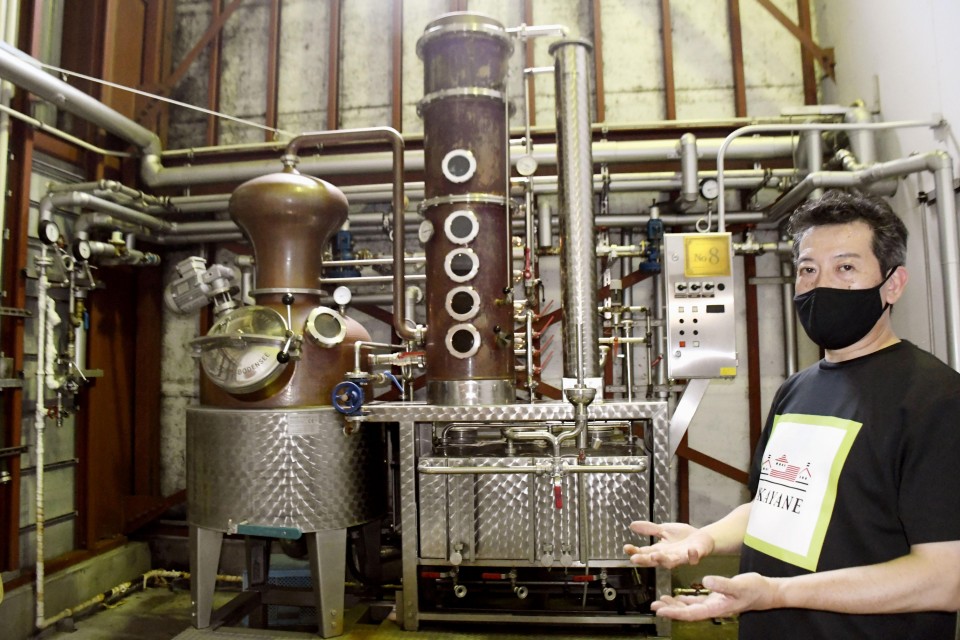 Meanwhile, the Osuzuyama Distillery, which sits on a site surrounded by forest in the town of Kijo in Miyazaki Prefecture, also in Kyushu, began selling Osuzu Gin last summer.

The craft gin, which is made by further distilling the company's Yamaneko shochu made from sweet potatoes, is infused with local farm botanicals such as kumquat and "hyuganatsu" citrus fruit as well as shiitake mushrooms. The fragrant gin can be enjoyed as a mixed drink with carbonated water. 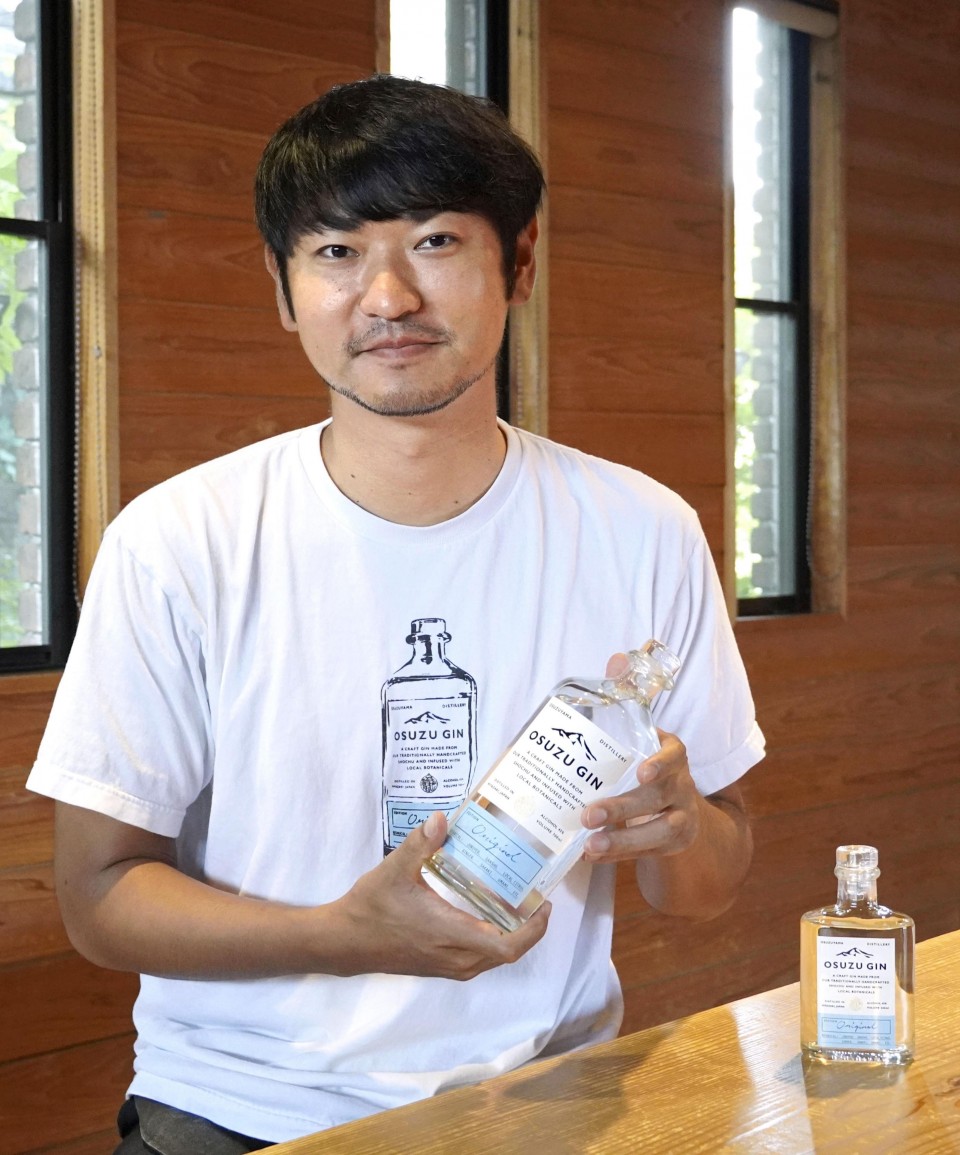 Shinsaku Kuroki, 33, the fifth-generation head of sister brewery Kuroki Honten, which helped work on the gin, says that as a producer, he wants to "continually seek out new tastes." He began devoting himself to gin production a year after assuming his position in 2015 at Kuroki Honten, which first opened its doors in 1885.

Kuroki's main concern was finding which plants to use. It took three years of trial and error to perfect his product. Although Kuroki imports a small portion of ingredients essential for gin production, such as juniper berries, he tries to use local produce and even attempts to grow them on the company farm.

It is said that after shochu was introduced to Japan, it took time for sweet potatoes to become a main ingredient, while the types of "koji" mold used also changed throughout the ages.

"The production of shochu has changed with the times. Gin production is an extension of this," Kuroki said. 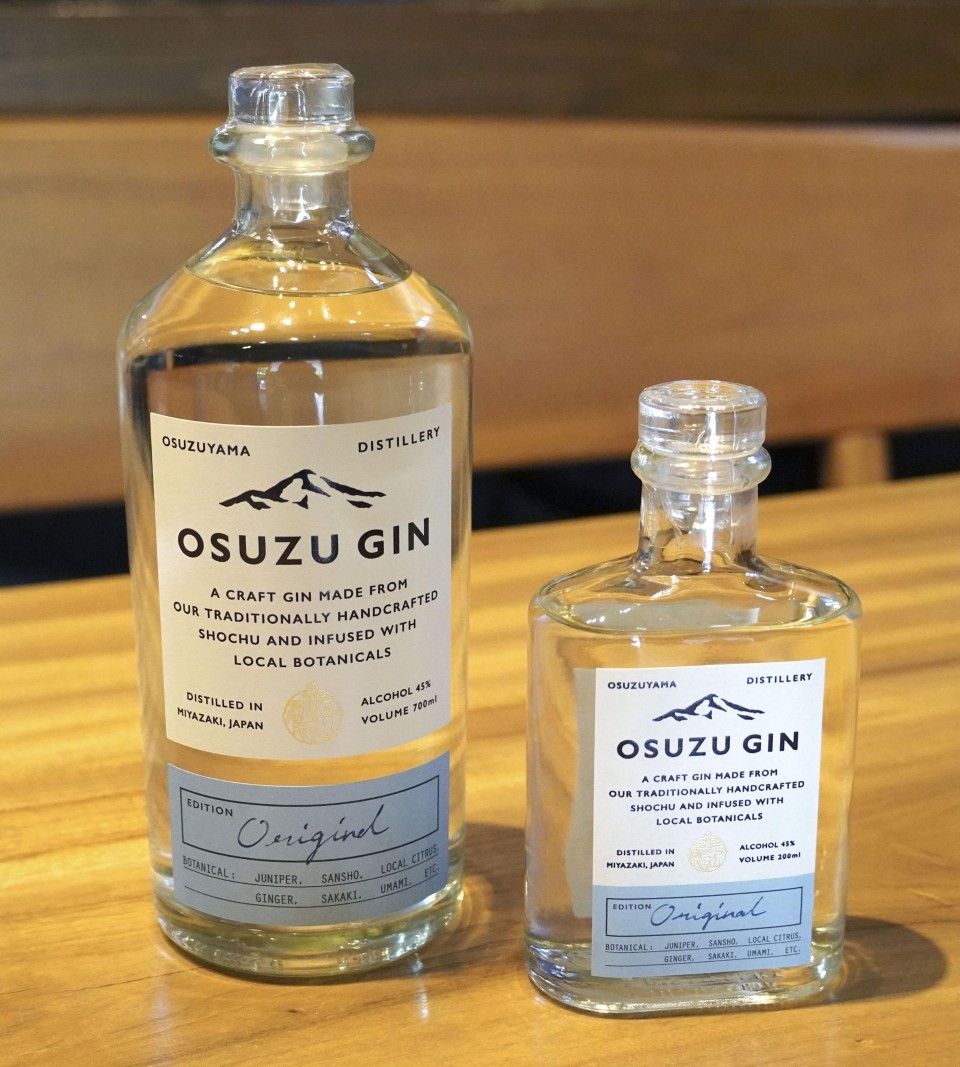