Steven Gardiner won the men's 400-meter gold for the Bahamas at the Tokyo Olympics on Thursday, powering home in the final stretch to finish ahead of Colombia's Anthony Jose Zambrano and Grenada's Kirani James.

The 25-year-old Gardiner clocked 43.85 seconds on a humid night at Tokyo's National Stadium, adding Olympic gold to his 2019 world championship. 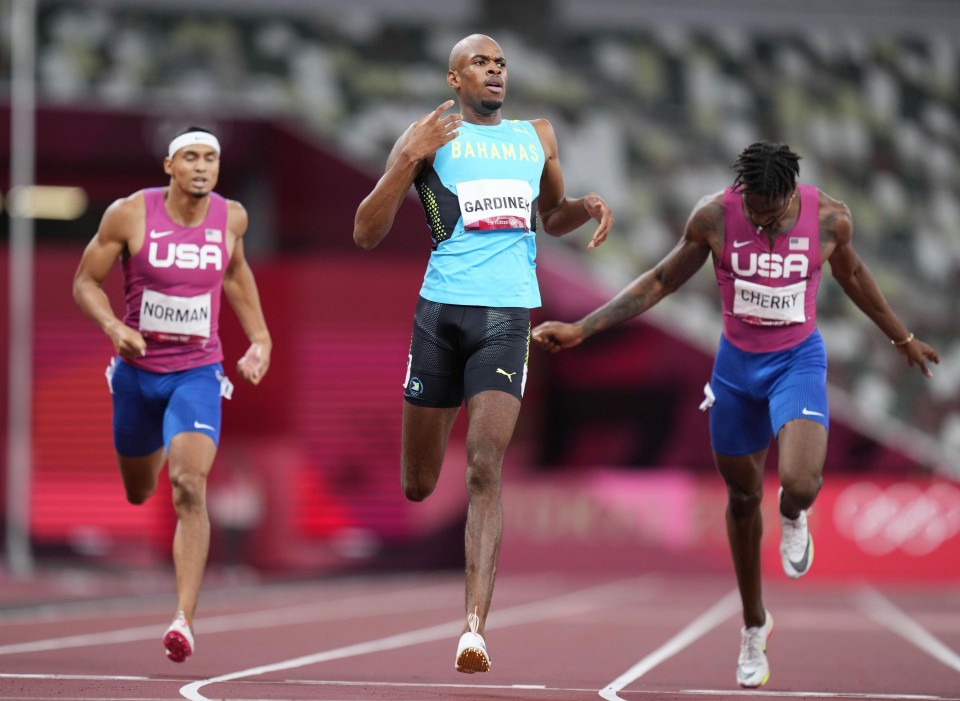 Steven Gardiner of the Bahamas (C) runs en route to winning the men's 400-meter final at the Tokyo Olympics on Aug. 5, 2021, at the National Stadium. (Kyodo) ==Kyodo

Zambrano took silver in 44.08, while James, who won gold in 2012 and silver in 2016, finished a further 0.11 back to become the first three-time Olympic medalist in the event.

Gardiner said the nerves of his first Olympic final led him to stumble out of the blocks, but he remained confident his strong finishing would allow him to rein in the runners ahead.

"I didn't panic. I think if I panicked, I would have messed the whole thing up. I just kept it moving. And my coach, he always says, 'it's not about who gets out of the blocks first, it's who crosses the line first,'" said Gardiner, the first male runner from the Bahamas to win Olympic gold.

James, who reached the games after overcoming autoimmune disorder Graves' disease, said he was thrilled to enter the history books and would strive for another medal at the 2024 Paris Olympics. 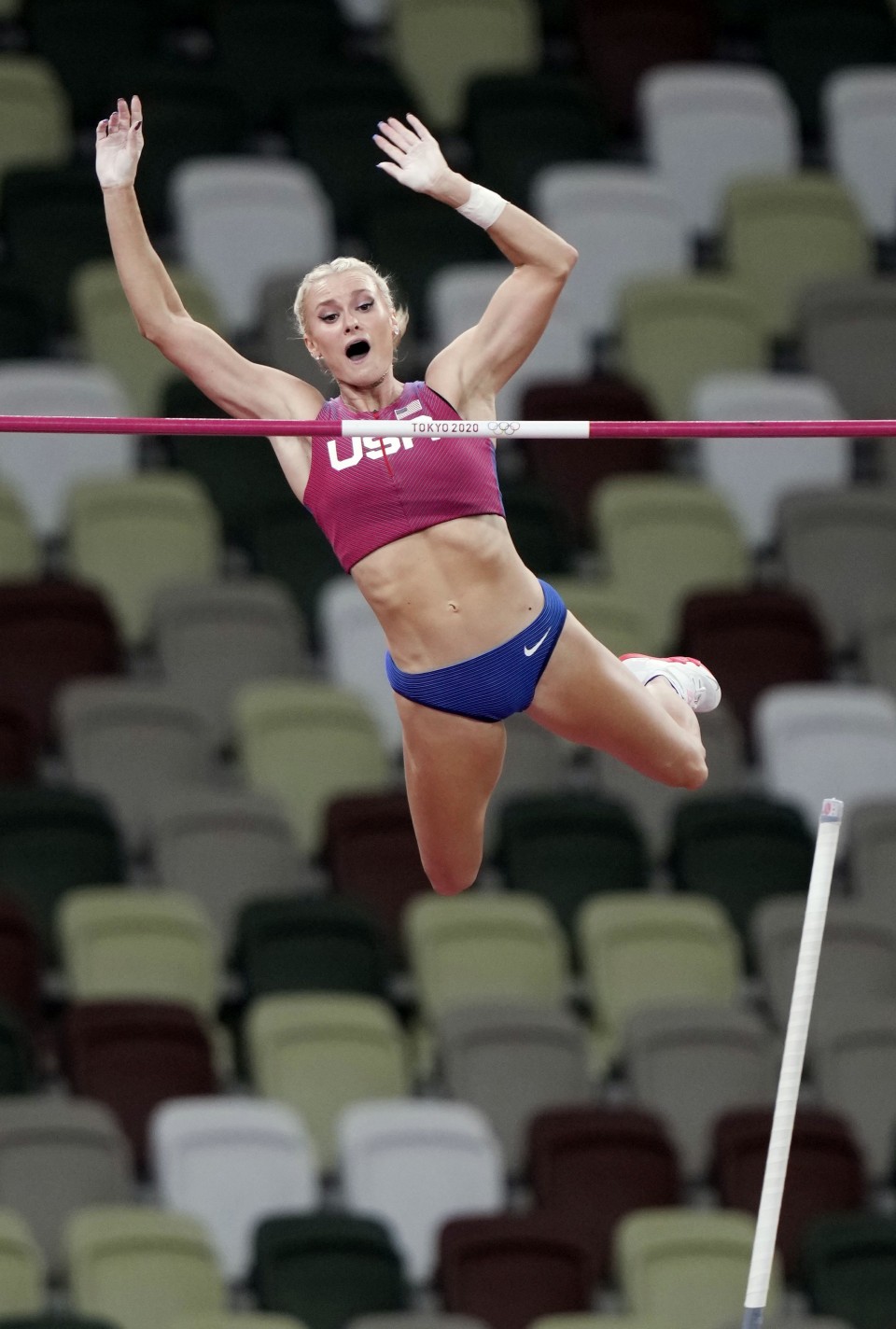 Katie Nageotte of the United States competes en route to winning the women's pole vault final at the Tokyo Olympics on Aug. 5, 2021, at the National Stadium. (Kyodo) ==Kyodo

Greece's Katerina Stefanidi, gold medalist at the 2016 Rio de Janeiro Games, bowed out of her title defense with the bar at 4.80 to finish fourth.

Damian Warner won Canada's first-ever decathlon gold medal, finishing with an Olympic record 9,018 points ahead of Kevin Mayer of France on 8,726 and Australian Ashley Moloney with 8,649.

In the morning session, Japan men's 4x100-meter relay team advanced to the final at the Tokyo Games after placing third in its heat. 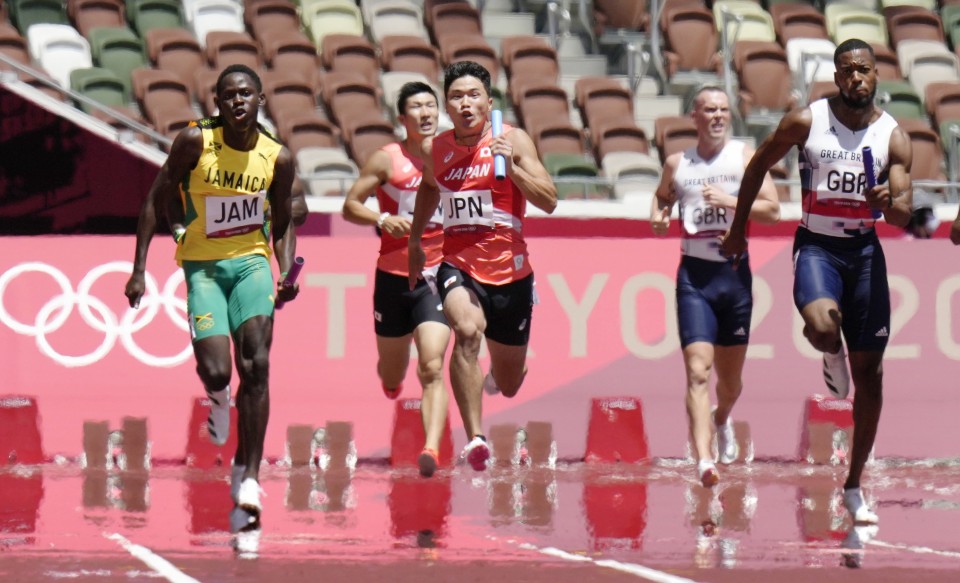 Yuki Koike (C, front row) of Japan competes in the men's 4x100-meter relay heats at the Tokyo Olympics on Aug. 5, 2021, at the National Stadium in Tokyo. (Kyodo)

Shuhei Tada, Ryota Yamagata, Yoshihide Kiryu and Yuki Koike posted a season-best time of 38.16 to finish behind defending champion Jamaica, which topped the heats with the fastest time of 37.82, and Britain, which clocked 38.02.

The United States failed to advance, finishing sixth in its heat won by China in 37.92. The top three in each heat qualify for the final, plus the two fastest nonautomatic qualifiers.

"It was the first relay and I wasn't sure how it would go but it's good to get it out of the way," said Yamagata, who along with Kiryu was on Japan's silver-medal winning team at the Rio Games five years ago.

Japan finished seventh its heat and failed to advance to the women's 4x100 relay final.

In medal events in the morning session at National Stadium, Hansle Parchment of Jamaica won the men's 110 hurdles gold, catching Grant Holloway of the United States in the last 10 meters and coming home in 13.04 seconds.

World record holder Ryan Crouser led the United States to a 1-2 finish in the men's shotput, defending his gold medal with an Olympic record final throw of 23.30 meters. Joe Kovacs and Tomas Walsh of New Zealand took silver and bronze.

Pedro Pichardo of Portugal won the gold medal in the men's triple jump with a third jump of 17.98 meters, ahead of China's Zhu Yaming and Hugues Fabrice Zango who won Burkina Faso's first Olympic medal ever.

Kenya's Abel Kipsang set a new Olympic record in the semifinals of the men's 1,500 meters, clocking 3:31.65 to qualify fastest for Saturday's final. Rio gold medalist Matthew Centrowitz of the United States will not defend his 1,500 title, missing the final after running ninth in his semi.