Iran's Persian carpet industry is creaking under the weight of U.S. sanctions and the coronavirus pandemic. But its craftsmen may have found a way to innovate their way out of trouble -- weaving miniaturized versions of the traditional rug as substitutes for Japan's ubiquitous "zabuton" floor cushions.

Iranian carpet weavers have seen their sales roughly halve in the last few years as rivals in India and Turkey look to grab market share. 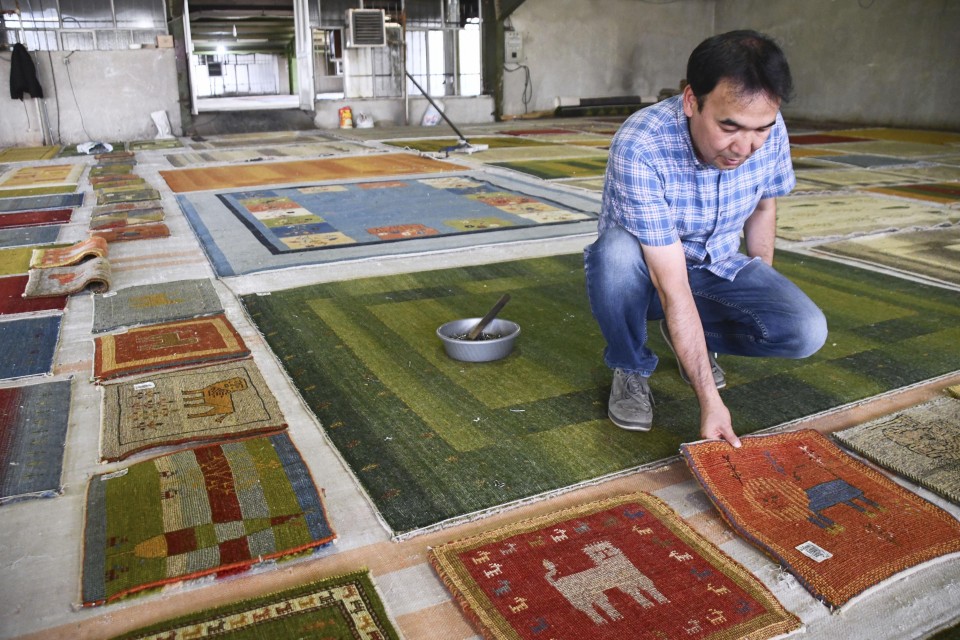 Photo taken on June 22, 2021, shows Zollanvari's Mohammad Jafari smoothing out a scaled-down version of a Gabbeh rug, which has been fitted to the size of a Japanese "zabuton" floor cushion. (Kyodo)

"We sell 60 percent of our products to Japan because economic sanctions ban us from exporting them to the United States, which used to be our biggest market," explained Mohammad Jafari, a 43-year-old weaver at Zollanvari, a long-established carpet company in Tehran.

Jafari and other Zollanvari artisans were putting the final touches to a scaled-down version of a Gabbeh rug, a traditional variety of Persian carpet. Measuring roughly 40 square centimeters, or about the size envisioned for a zabuton cushion, the color scheme is reserved, unlike the brightly colored products exported to the United States.

"The product is the polar opposite (of the carpets exported to the United States)," said Jafari. 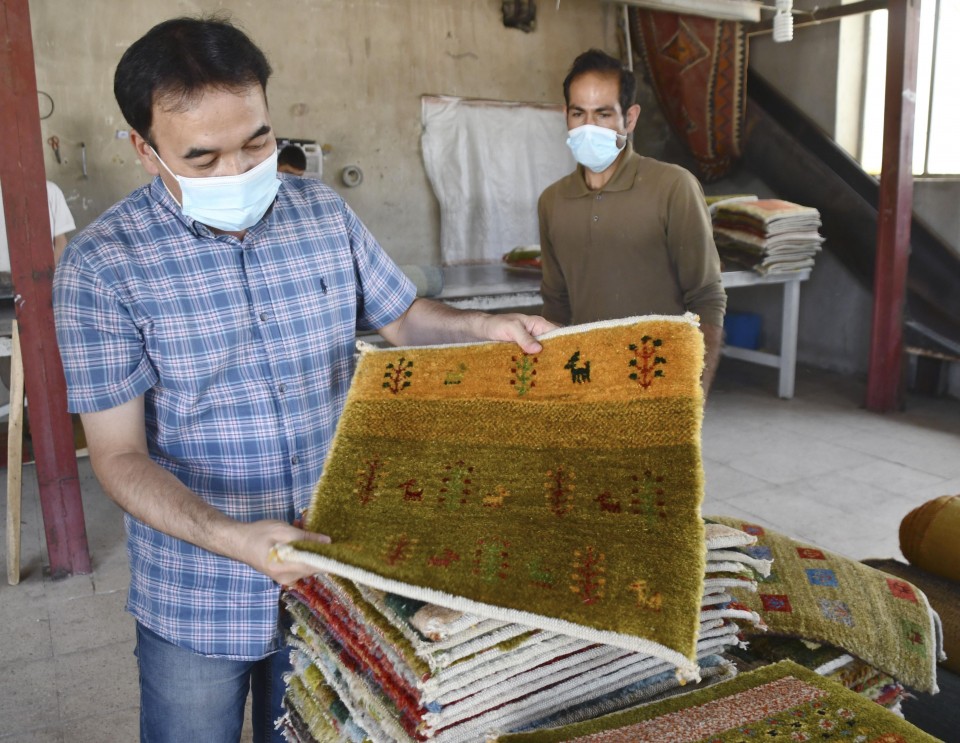 Photo taken on June 22, 2021, shows Zollanvari's Mohammad Jafari (L) holding a scaled-down version of a Gabbeh rug, which has been fitted to the size of a Japanese "zabuton" floor cushion. (Kyodo)

While Persian carpets were exported to more than 30 countries, Japan was the top destination from March to May this year, Iran's Mehr News Agency reported.

The Iranian rug industry has been at the mercy of relations between Washington and Tehran.

"Sales and the number of craftspeople (at Zollanvari) have fallen by more than half," Jafari lamented.

The outbreak of the COVID-19 pandemic has only added to the weavers' plight. "Buyers from abroad have been unable to come," said Ali Jahan, 55, who owns a carpet store in Tehran. "The number of foreign customers has dropped to zero from 50 or so per month," he said. 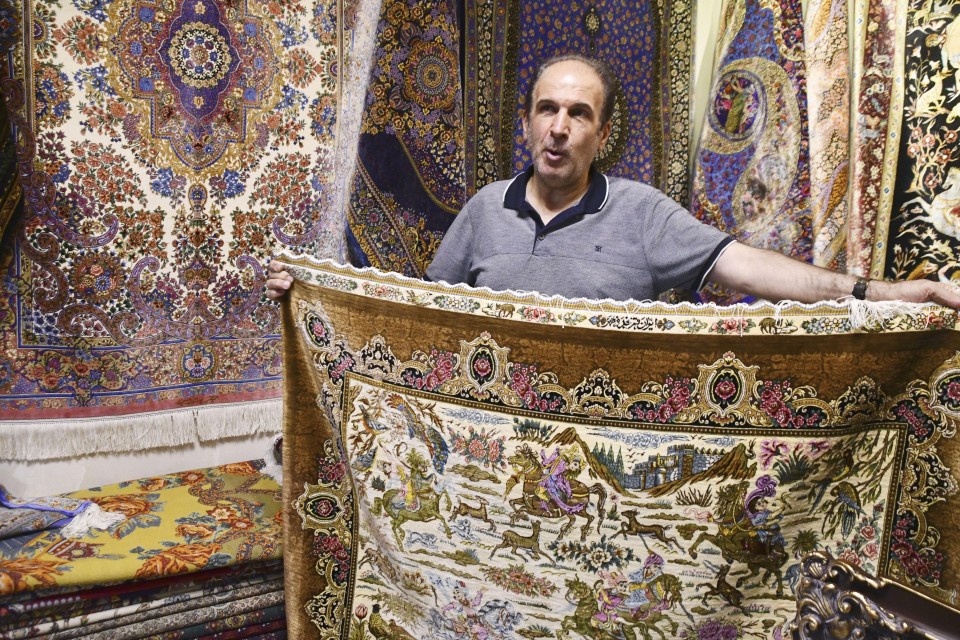 The hand-weaving of carpets in the home had been an important source of work for women in rural villages in Iran. But the steep fall in the volume of work has cast a shadow over the future of the traditional industry.

Iranian carpets are woven from wool and silk and originated in a nomadic culture. They are said to have been woven on the Iranian Plateau since ancient times and are now popular items for European and U.S. consumers. The Ardabil Carpet exhibited at a museum in London is considered to be the best example of the craft. 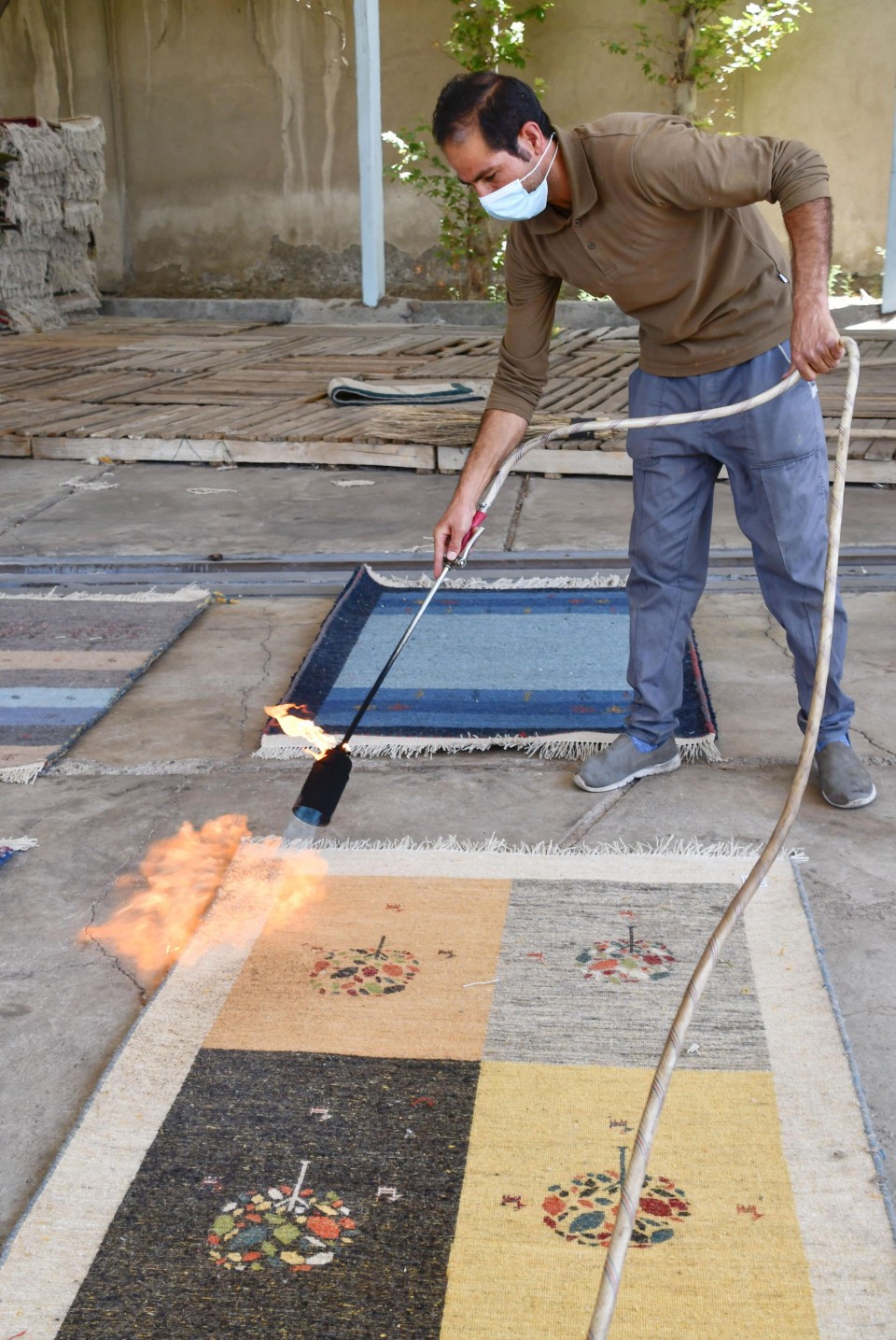 Photo taken on June 22, 2021, shows a Zollanvari craftsman making finishing touches on a Persian rug at a workshop in Tehran. (Kyodo)

In Srinagar in northern India, which is home to the Kashmir carpet, a maker welcomed the U.S. sanctions on Iran as it meant "an increase in our customers."

In Turkey, a senior official of the Istanbul Carpet Exporters' Association, although aware of the situation in Iran, said Turkey's production capacity "is limited because the number of weavers has dropped due to the modernization of rural regions."

Despite the current difficulties faced by Iranian makers, the Persian carpet retains strong brand power, partly because UNESCO designated it as an intangible cultural heritage of humanity in 2010.

Persian carpets will even be on show in Kyoto's famous Gion Festival next year. They will be used as part of the decoration on a giant float that will roll through the city's streets for the first time in nearly 200 years.

Woven by women, the Persian carpet has developed through a long history of appreciation by Iranian buyers, said Amir Solemanieh, 42, owner of Miri Collection, a Persian rug shop in Tokyo that arranged the procurement of the new carpets for the float.