Tokyo Paralympic wheelchair tennis matches on outdoor courts started on Friday after more than a six-hour delay due to intense heat in the Japanese capital.

In line with a special policy aimed at protecting players, organizers decided to suspend matches scheduled for all nine outdoor courts at Ariake Tennis Park as the temperature reached 33 C, a figure above what is considered safe on the heat stress index scale, at 11 a.m.

Play on the first day of the tennis competition was scheduled to start at that time but the outdoor matches finally began after 5 p.m. 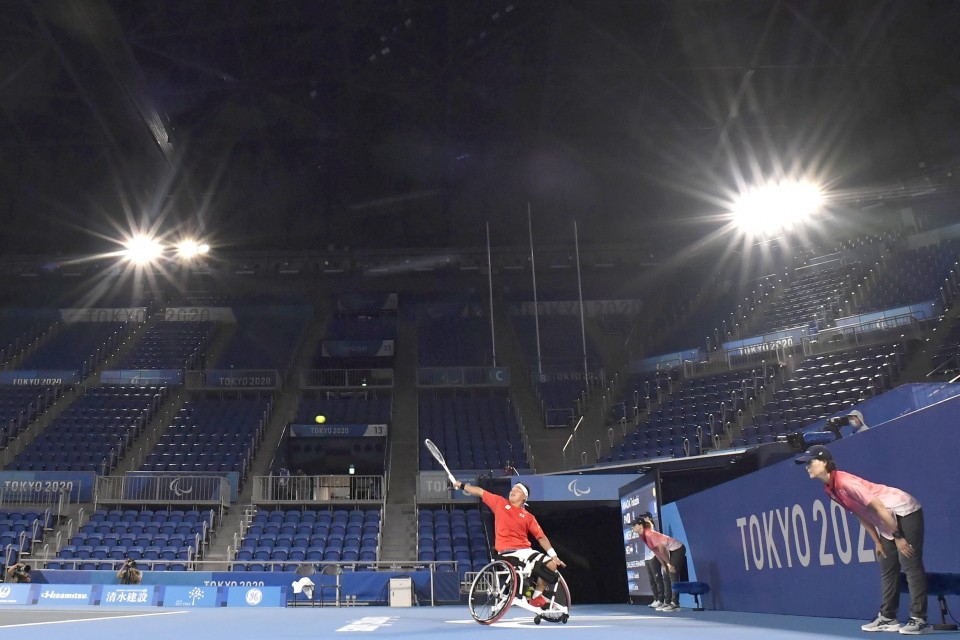 Takashi Sanada of Japan plays in the men's singles first round of wheelchair tennis at the Tokyo Paralympics on Aug. 27, 2021, at Ariake Tennis Park. The Centre Court roof was closed to protect players from the heat. (Kyodo) ==Kyodo

The schedule changes caught some players off guard and required them to rush to make it to their designated court times.

"Today was difficult with the time. When we started, I was still practicing because we thought we were playing at 6 p.m.," said Daniel Caverzaschi of Spain after defeating Britain's Dermot Bailey 6-2, 6-0.

"The heat, I mean it's really hot in Tokyo, but I am Spanish, I do like the heat, normally," Caverzaschi said, adding he cannot complain too much because other players may be more seriously affected.

A match between Japan's Takashi Sanada and Carlos Anker of the Netherlands was able to go ahead as planned with the roof closed on center court. It was the first match scheduled on the court for the day.

Sanada said he was "surprised" that the roof was closed and the stadium was air conditioned when he met the press after beating Anker 6-1, 6-1.

"I was a little nervous at first, but I was able to adjust and play the match at my pace," he said.

The other matches on center court were played on schedule throughout the day.

The International Tennis Federation has implemented an extreme weather policy with measures aimed at protecting the health of the players such as allowing them to take extra breaks or organizers to suspend matches. The policy was also triggered during the Olympics.

Since some athletes with disabilities have trouble regulating their body temperature, heat stress index figures used for the Paralympics are stricter than those for the Olympics.

Wheelchair tennis players are more susceptible to the heat from the hot court surface as their torso is comparatively close to the ground when compared with able-bodied tennis players.

During the Olympics, which ended Aug. 8, tennis matches were moved later in the day to protect the health of the players after some, including world No. 1 Novak Djokovic of Serbia, were vocal about the challenge of playing in the heat and humidity of the Tokyo summer.

The heat stress index, also known as the wet-bulb globe temperature, or WBGT, is a scale proposed in the United States in 1954 to prevent heat illness and recognized as a useful guideline for work and sports environments.

It incorporates factors that significantly influence the impact of heat on the human body -- temperature, humidity and heat radiation.