Fears are mounting that another wave of novel coronavirus infections in China may prevent the 2022 Beijing Winter Olympics from being held in a complete form, along with the threat of a games boycott by some nations over human rights issues.

In February, Beijing is set to become the first city to host both the summer and winter games but the number of new infections has been rising owing to the spread of the Delta variant in the run-up to the Olympics scheduled to open six months from Wednesday. 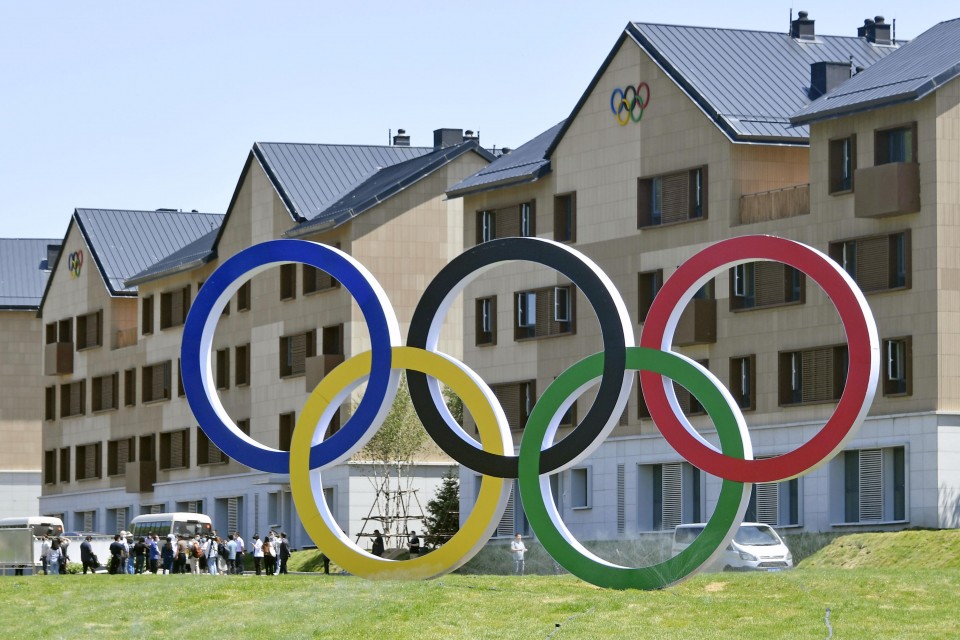 The athletes' village for the Beijing Winter Olympics is unveiled to foreign media on July 14, 2021, in Zhangjiakou, northwest of the Chinese capital. (Kyodo) ==Kyodo

As the Tokyo Summer Games are being held without spectators at almost all venues, the leadership of Chinese President Xi Jinping has been seriously considering anti-epidemic measures in an attempt to host a safe and secure Olympics, diplomatic sources said.

The Communist-led government, meanwhile, has been facing boycotts by other countries critical of alleged human rights abuses in the nation's regions including Hong Kong, Tibet and Xinjiang.

"The worst-case scenario for China is that the infectious situation will worsen and many democratic countries will boycott the Olympics. China does not want to hold a large-scale athlete festival only for Chinese people," one of the diplomatic sources said.

"Xi must hope that the Tokyo Olympics will end without trouble and Japan will participate in the Beijing Games," he added.

The Tokyo Olympics have been taking place from July 23 through Sunday under a COVID-19 state of emergency against a backdrop of a resurgence of infections in Japan.

In May, the official Xinhua News Agency said there was skepticism across the globe about the holding of the Tokyo Olympics and Paralympics this summer.

Nevertheless, the news agency added, the games are not for the city or Japan but for "the world," expressing hope that the Tokyo Olympics will result in success, even without an audience, as Beijing will receive the baton from the neighbor's capital.

So far, China has held a testing program for the 2022 Beijing Winter Olympics and Paralympics in a bid to gauge how the nation can curb infections during the major sports events, while most of the main venues have already been completed.

Earlier this year, Xi pledged to work together with the International Olympic Committee toward the success of the Beijing Games in his telephone talks with IOC President Thomas Bach.

China has been eager to hold the Beijing Olympics and Paralympics "with national pride at stake," said a source familiar with the Communist Party's thinking. "It has been carefully watching whether Tokyo can end hosting the games amid the virus spread."

In China, however, the virus has recently begun raging again after people in the southern city of Guangzhou were infected in late May with the Delta variant, first identified in India.

China's central city of Wuhan, the original epicenter of the COVID-19 pandemic, has locked down certain areas, as local authorities confirmed new infection cases for the first time in about one year, state-run media reported Tuesday.

Also in Beijing, the municipal government has locked down some areas of the capital, around where infected cases were detected.

The increase in new infections had apparently peaked in late February 2020 in the mainland on the back of the ruling party's radical "zero corona" policy, but China has been forced to guard against the highly contagious variant, pundits said.

Xi's leadership has become concerned that expanding infections would deal a blow to private spending and investment later this year, probably casting a damper on building momentum for the Beijing Olympics, they added.

A possible boycott by democratic countries of the Beijing Olympics has been frustrating China, too.

Calls have been emerging within the United States and the European Union to initiate some form of Olympic boycott or seek a change in host nations as punishment for China's alleged human rights abuses against the Muslim Uyghur minority in Xinjiang.

"The so-called genocide in Xinjiang is a through-and-through lie of the century fabricated by a few anti-China forces," Zhao said.

China has "noticed that individual congressmen in the United States, out of ideological and political prejudice, have used it to smear China and try to disrupt, obstruct and undercut the efforts to prepare for and host the Beijing Winter Olympics," he added.

In mid-July, the United States stepped up a warning for businesses with supply chain and investment links to Xinjiang, citing the risk of association with alleged severe human rights abuses and forced labor in the region.

Some other countries also have started to levy sanctions or take similar measures against China in relation to the Xinjiang issue.