Tomoa Narasaki has never hidden his desire to become the first Olympic gold medalist in sport climbing and he remains the favorite in Tokyo after continuing his calculated progress in this pandemic-hit year.

"It's finally here and my feeling is largely one of excitement. I've been setting my sights on becoming the first champion," said the popular climber, who originally enjoyed gymnastics before switching to climbing at the age of 10.

Having clinched his Olympic berth by winning the 2019 world championships in combined, the exact format used at this summer's games, the disappointment was inevitable following the announcement of the postponement. 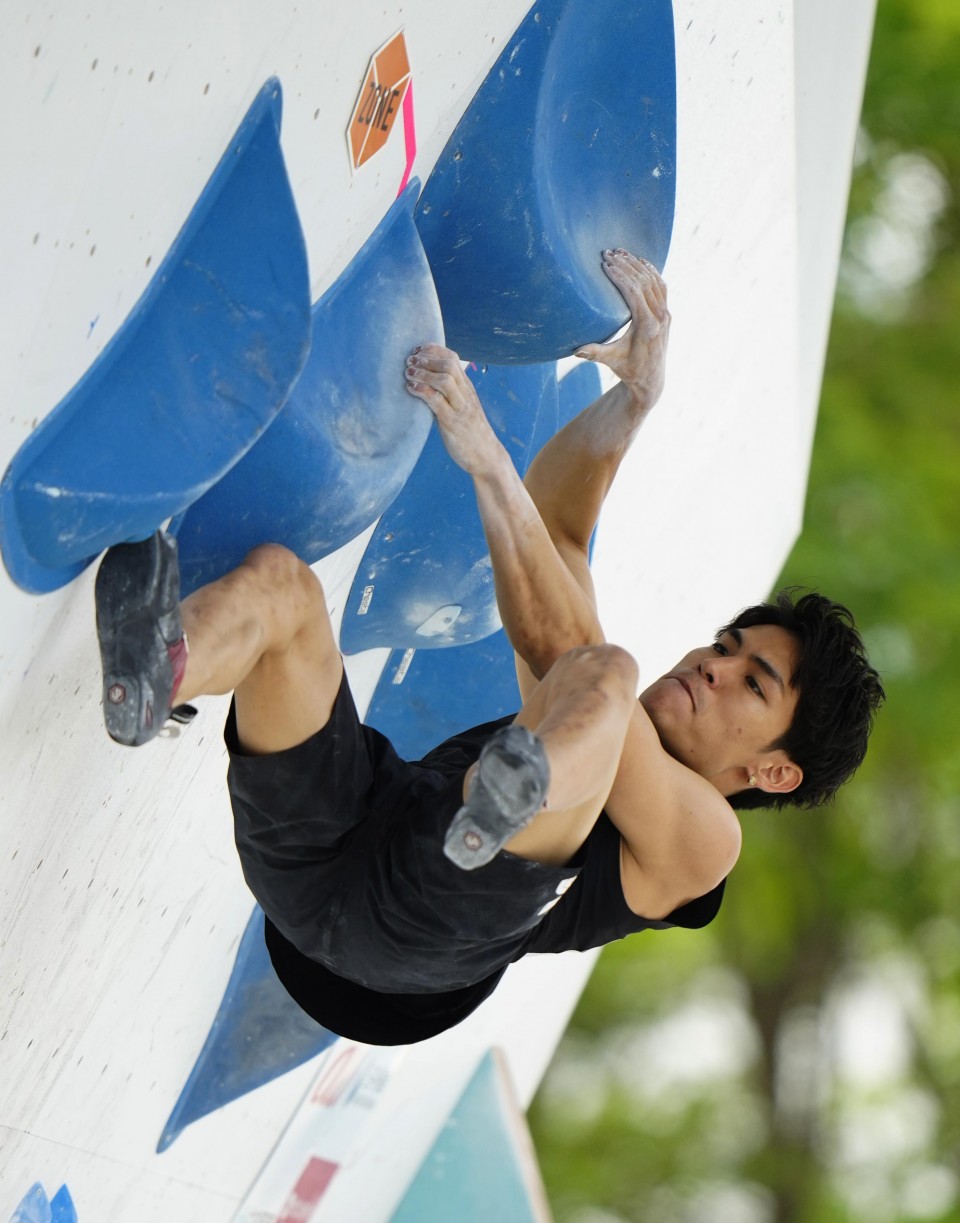 But the postponement also enabled Narasaki to use the extra year to become an even more all-around climber. That was thanks in part to his fellow Olympian Akiyo Noguchi, after she had built speed, bouldering and lead walls at her house, used by Narasaki as a training base, in Ibaraki Prefecture in spring 2020.

Aptly known as a ninja, more so away from Japan, due to his agile and flashy climbing style, the 25-year-old Narasaki claimed both the World Cup season title as well as world championships in 2016 and 2019 in bouldering.

But his title in combined at the 2019 worlds most encapsulates his versatile talent.

The final standing in the format is determined by multiplying positions from the three disciplines of speed, bouldering and lead, the lowest winning the gold medal.

The stumbling block was speed for the Japanese climbers, traditionally strong on boulders and lead. And Narasaki has taken the new challenge in his stride. 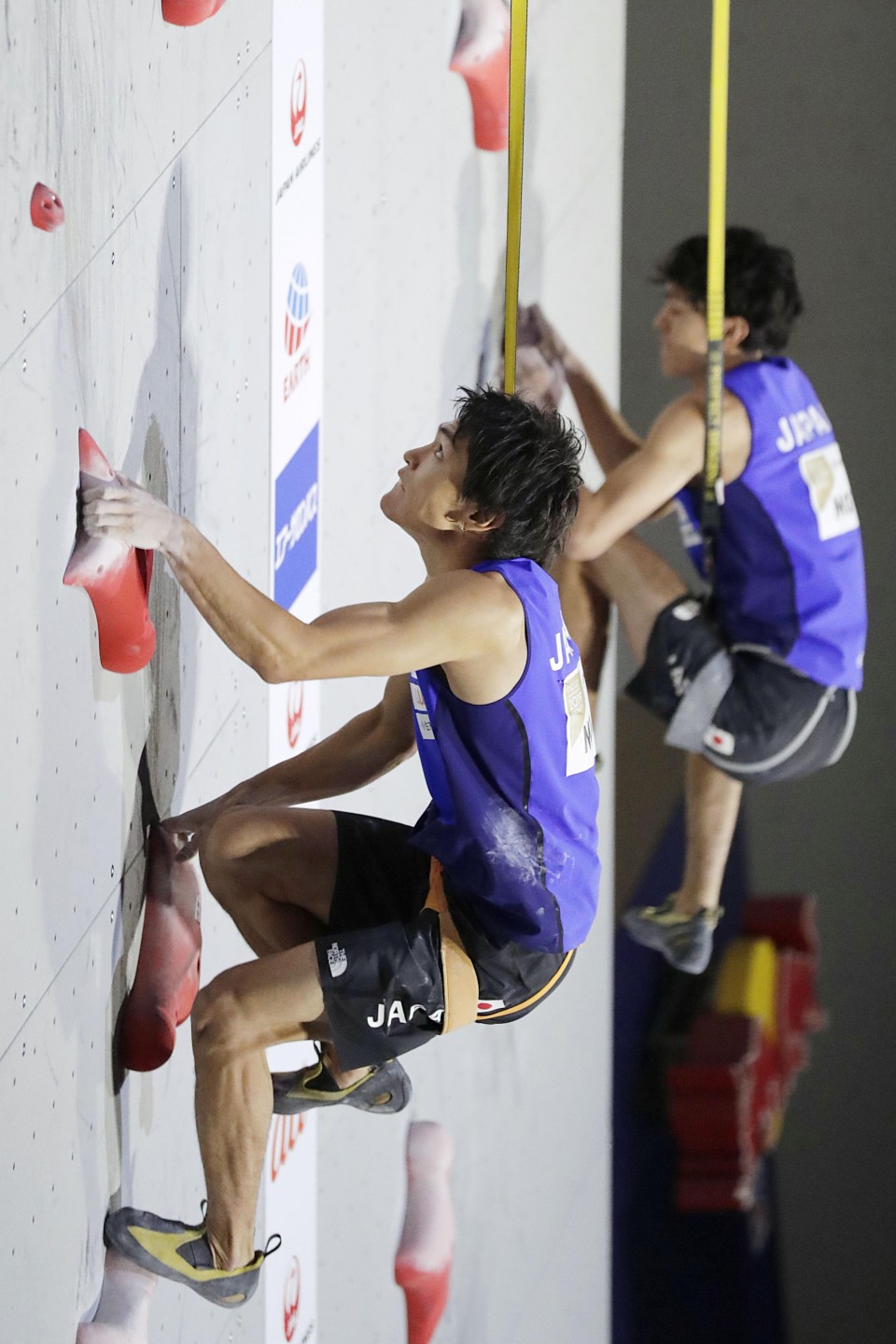 Japan's Tomoa Narasaki (L) and his younger brother Meichi compete in the speed discipline of the men's combined final at the sport climbing world championships in Hachioji, western Tokyo, on Aug. 21, 2019. (Kyodo) ==Kyodo

The national association began fully sending its climbers to the speed World Cup circuit in 2018 to navigate the uniform 15-meter-high wall, and also launched the Speed Japan Cup in 2019.

Having thrived on boulders and also in lead, Narasaki had the innate ability to also be a top speed climber as he keeps renewing the national record.

In inventing the "Tomoa skip" during the 2018 Asian Games, in which he bypassed an early hold on the left that was to be used in theory, he this time got himself a move named after him from overseas climbers for the innovation.

Narasaki needed over 6.1 seconds to touch the top of the wall two summers ago, but the Tochigi-native continued to shed time and renewed his record twice at the Speed Japan Cup this March, first with 5.79 and then 5.72 as he closes in on the world record of 5.48.

"It's a confidence booster to get this time," said Narasaki, whose work on his lower body he began this year has quickly proved effective.

Adam Ondra, a strong lead climber, will be his direct rival for the games' gold medal after the Czech won both of the two bouldering World Cups he has taken part in this season.

Narasaki, who has been working with a new coach and came second and third in his two bouldering World Cup appearances this term, will hope he can top his rival in the first two disciplines in speed and bouldering.

"The sport has grown in popularity since getting added to the Olympic program. I feel as though it is my mission to deliver at these games," he said.