Heavy rain continued to pelt vast areas of Japan on Monday as mudslides had killed at least four people and left five others missing, with the country's weather agency urging the public to remain vigilant as the threat of more disasters remains.

The Japan Meteorological Agency said more heavy rain is forecast for wide areas from western Japan to the northeastern parts of the country in the coming days as a stationary front is expected to remain parked over the Japanese archipelago this week. 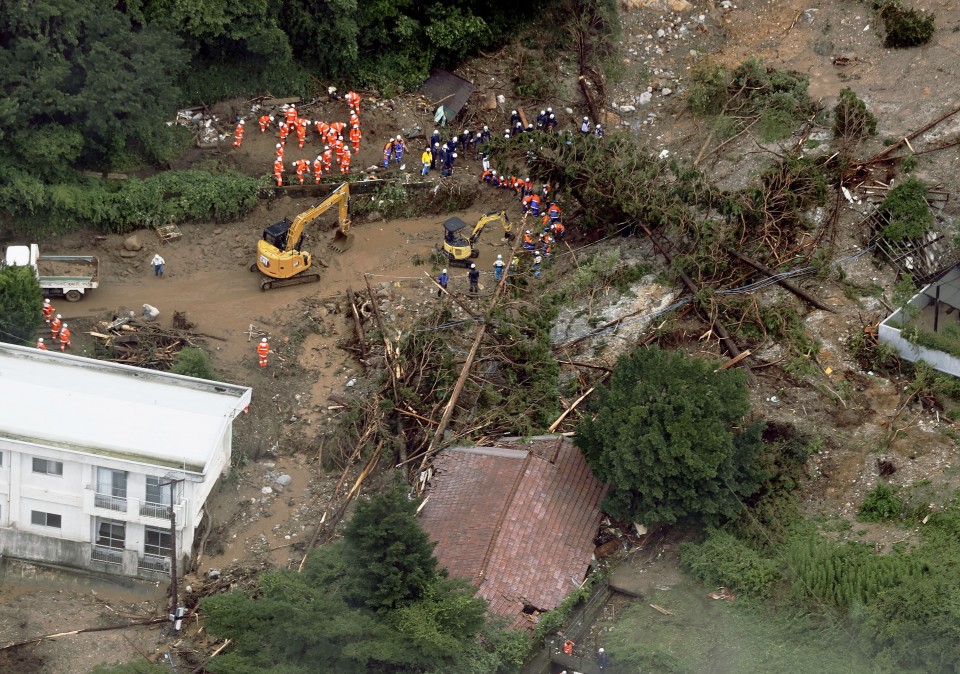 Photo taken from a Kyodo News helicopter on Aug. 15, 2021, shows the site of a mudslide triggered by torrential rain in the Nagasaki Prefecture city of Unzen in southwestern Japan. (Kyodo) ==Kyodo

The agency said even a small amount of rain could trigger disasters as the land may have already been saturated with rain from the past few days, warning of flooding and mudslides.

As of Monday morning, the country's land ministry confirmed 62 cases of rain-triggered mudslides in 17 of Japan's 47 prefectures and 36 rivers that have overrun their banks in nine prefectures, damaging homes and disrupting transportation.

In the central Japan city of Okaya, Nagano Prefecture, Yuki Makibuchi, 41, and her sons Haruki, 12, and Naoki, 7, died after a mudslide struck a house early Sunday morning. Another teenage boy and a man in his 40s were taken to hospital with slight injuries.

Masao Makibuchi, the 68-year-old grandfather of the two boys who died in the disaster, told Kyodo News he heard a loud noise in the morning and found that sediment from a mountain behind the house had hit the second floor.

Makibuchi, who stayed in the house together with the three, said he tried to push aside mud to save his daughter-in-law and grandsons but could not even move through a distance of 1 meter. "I was with them just a moment ago, and now they're gone in an instant," he said.

The downpours also triggered a mudslide Friday in the southwestern city of Unzen, Nagasaki Prefecture, leaving a 59-year-old woman dead and her husband, 67, and their daughter, 32, missing, according to the city government. Rescue workers continued their search for them on Monday.

The Nagasaki police are also investigating the association between the rain and the deaths of two women in their 70s, who were found collapsed in a drain on Saturday in the city of Saikai.

Another three people remain missing in Hiroshima Prefecture in the country's west and the southwestern prefecture of Kumamoto.

Local authorities issued Sunday the highest-level alerts covering about 1.83 million people in seven prefectures at one point, calling on them to take steps to ensure their safety, according to the Fire and Disaster Management Agency.

As of 8:30 a.m. Monday, the highest-level alert was still in place in the southwestern prefecture of Saga, covering about 6,300 people.

In the 24 hours through noon Tuesday, up to 250 millimeters of rainfall was forecast in northern Kyushu, up to 200 mm in southern Kyushu and the Shikoku region in western Japan, and up to 120 mm across the Kinki and Chugoku areas in western parts of the country.