Japan has expressed concern to South Korea over its delegation's setup of its own food service at the Tokyo Olympics to prevent athletes from eating meals containing ingredients from Fukushima, home to the 2011 nuclear accident, Japanese government sources said Monday.

Japan urged South Korea late last month to take action over the matter, saying that launching such a food station at a hotel near the athletes' village in Tokyo causes further reputational damage on Fukushima products, which have been tested for radiation levels and proven safe, the sources said. 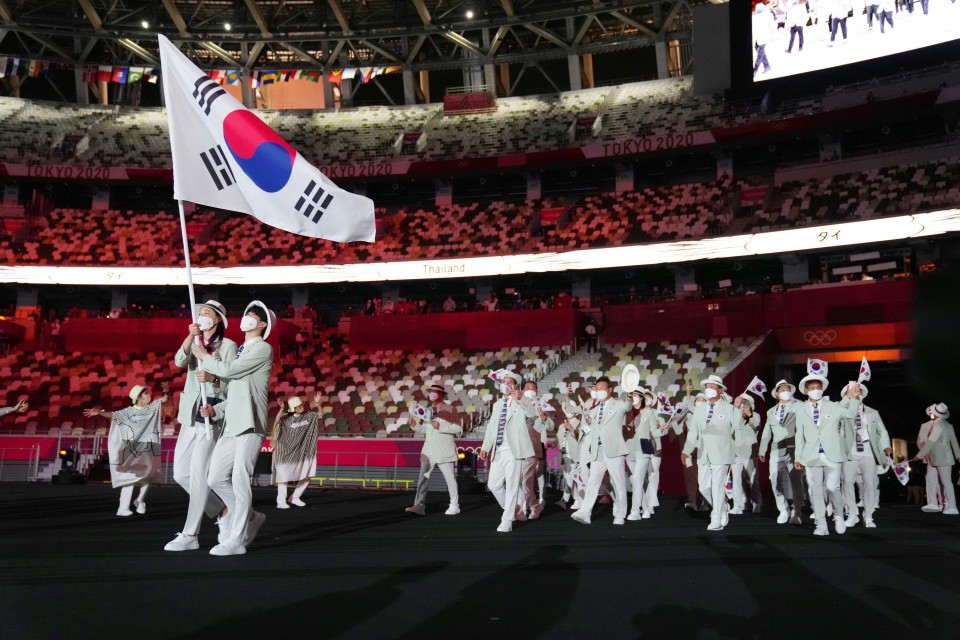 South Korea's delegation marches during the opening ceremony of the Tokyo Olympics at the National Stadium on July 23, 2021, in Tokyo. (Kyodo) ==Kyodo

The South Korean government has said that it has not instructed the delegation to set up such a food service.

The development adds tensions to already frayed ties between the Asian neighbors, stemming from disputes over wartime history and compensation issues.

"We want the South Korean government to instruct (the delegation) so that it would not become another political issue" between Japan and South Korea, said one of the sources.

The delegation started providing food boxes to athletes, with the officials cooking at the hotel and instructing the Olympians not to eat meals containing ingredients from Fukushima at the athletes' village.

The delegation has also been screening ingredients they use for radioactivity.

Japan also expressed concerns to South Korea about local media being critical of bouquets using flowers from Fukushima that are given to medalists at the Olympics, the sources said.

South Korea continues to ban imports of fishery products from Fukushima and nearby prefectures, more than a decade after the earthquake and tsunami disaster that triggered the nuclear crisis at the Fukushima Daiichi power station.

It is also strongly against Japan's plan to release treated radioactive water accumulating at the Fukushima Daiichi complex into the sea.