The poll, which is likely to precede a general election that must be held in the fall, will effectively be a vote to decide Japan's leader as the LDP controls the House of Representatives, the powerful lower chamber of parliament.

With Kishida announcing his bid in the LDP presidential election, for which campaigning starts Sept. 17, Sanae Takaichi, a former minister of internal affairs and communications, and Hakubun Shimomura, chairman of the LDP Policy Research Council, have expressed willingness to run in the race. 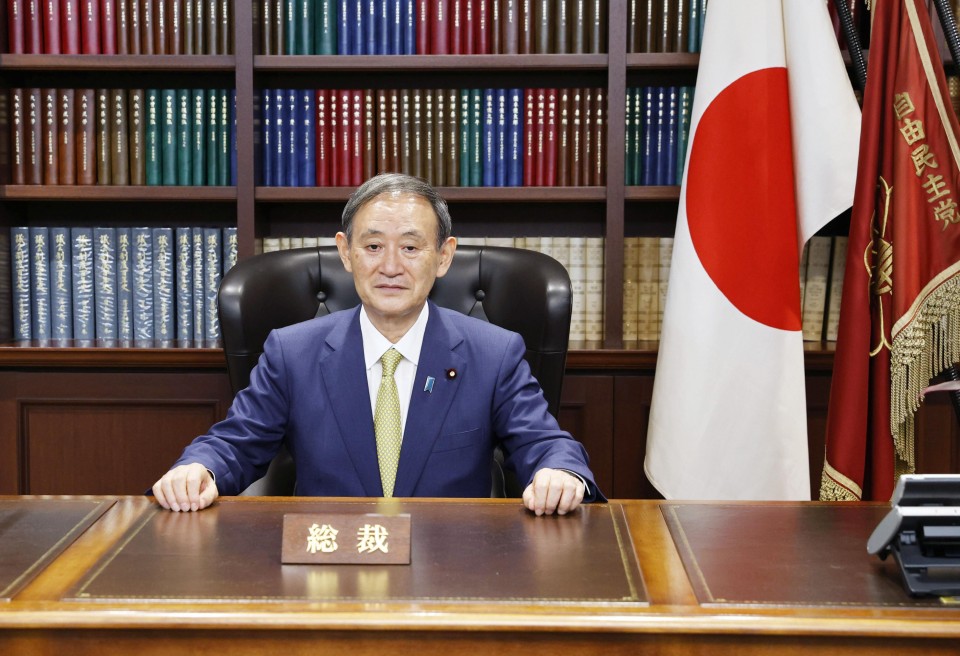 Japanese Chief Cabinet Secretary Yoshihide Suga sits in the chair of president of the ruling Liberal Democratic Party at the party's headquarters office in Tokyo on Sept. 14, 2020. (Kyodo)

Candidates backed by Suga or the LDP have recently lost a slew of local elections, including the Yokohama mayoral election in which voters unleashed their pent-up frustration at the government as the highly contagious Delta variant of the coronavirus continues to strain the country's medical system.

Suga, 72, whose term as LDP president is set to expire on Sept. 30, has said he will run in the party leadership race, and he told reporters Thursday afternoon "there is no change" to that plan.

Kishida, 64, who ran against Suga in the last LDP presidential election in September 2020, said at a news conference he will "present new (policy) options by staking my political career" on this race. 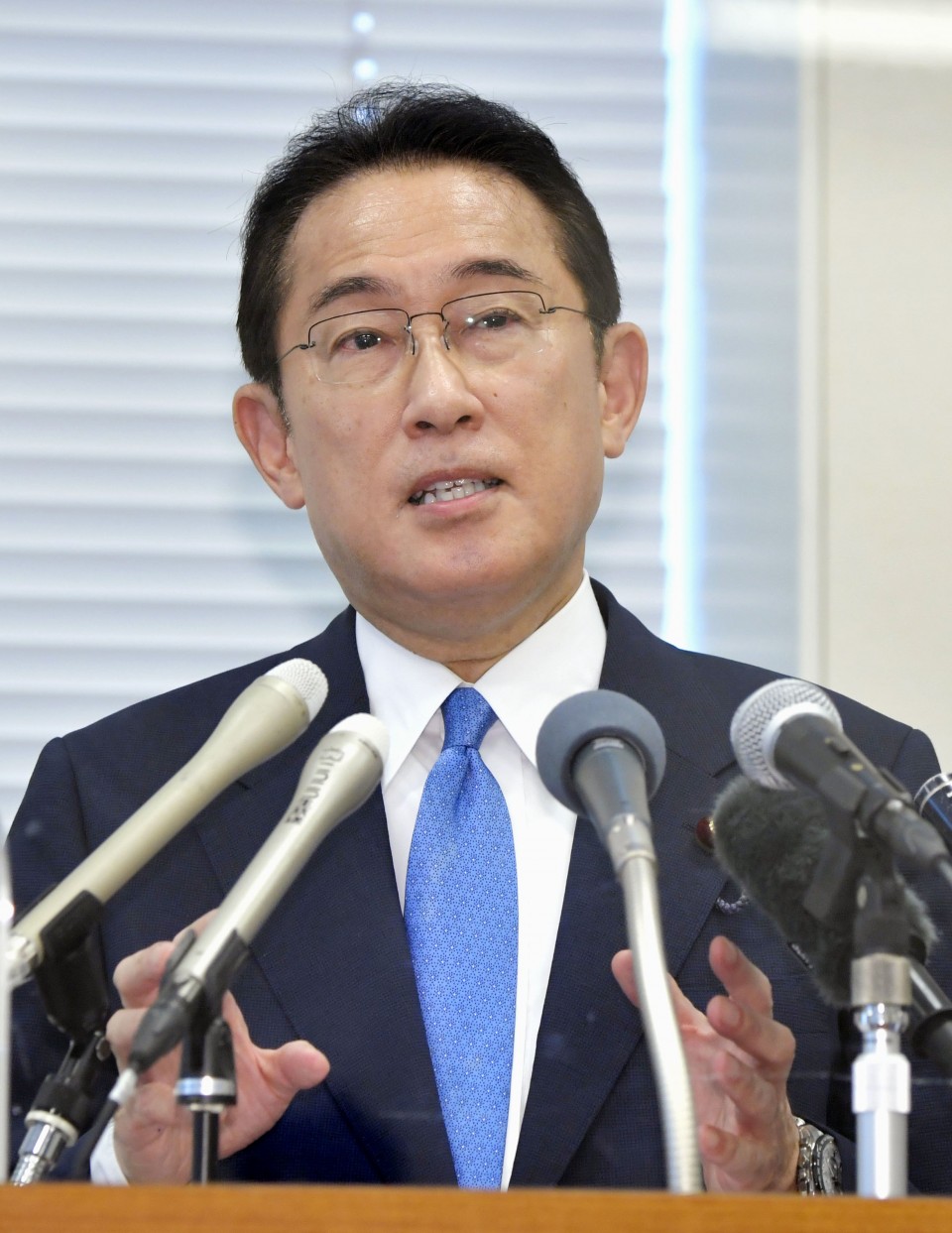 "People's trust, which is the foundation of politics, is falling apart," he said, in a veiled criticism of Suga's leadership. "Our country's democracy is facing a crisis."

Kishida, who heads an LDP faction with over 40 members, suggested he would implement tough measures against the COVID-19 pandemic, saying, "We need to keep in mind the worst-case scenario."

He called for public debate about amending the Constitution. The LDP advocates amendments including making an explicit reference to the Self-Defense Forces in the supreme law.

Speaking to reporters, Takaichi, who belongs to no LDP faction, sought support from fellow LDP lawmakers because the party requires hopefuls to first gather 20 nominations from the party's Diet members to run in the race. 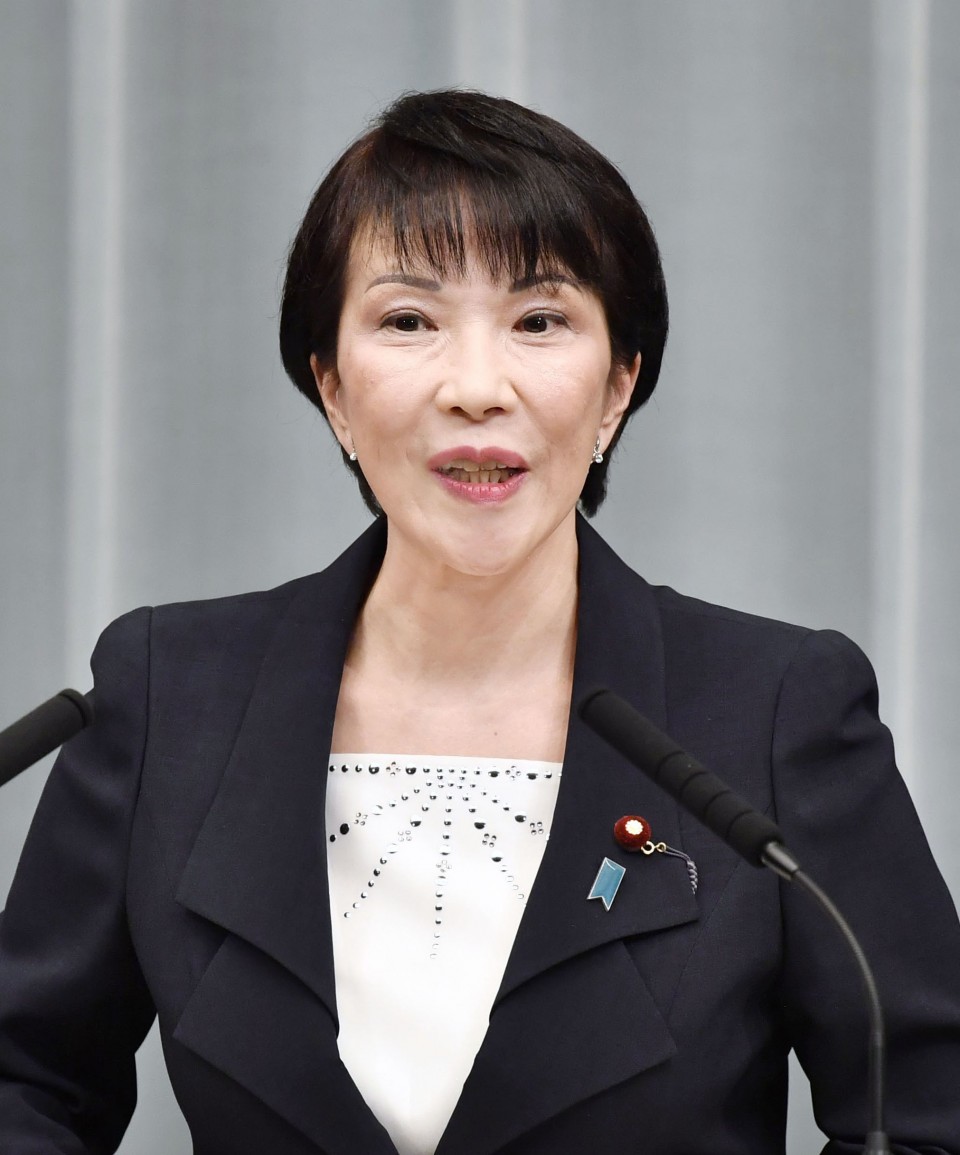 Sanae Takaichi attends a press conference at the prime minister's office in Tokyo after a Cabinet reshuffle on Sept. 11, 2019. (Kyodo)

If elected, the 60-year-old conservative would be the first female LDP president, and thus the prime minister.

In an article in a monthly magazine that hit the shelves on Thursday, Takaichi advocated amending the Constitution so Japan can possess "national defense forces."

Besides the LDP poll, the timing of a general election has been drawing attention as the four-year terms of House of Representatives lawmakers expire on Oct. 21 and the prime minister has the power to dissolve the lower chamber for an election.

Suga is likely considering dissolving the lower house in early October if re-elected as LDP president.

Last year's LDP presidential election was held following the abrupt resignation of then Prime Minister Shinzo Abe due to health reasons, with only party lawmakers and prefectural associations casting ballots.

Suga won as major party factions, including one led by LDP Secretary General Toshihiro Nikai, threw their support behind him despite Suga not belonging to a faction himself.

But this year's election will be held with voters expanded to include rank-and-file members of the LDP and allied groups, raising uncertainty about whether Suga will secure a second term.

The LDP lawmakers hold 383 votes and rank-and-file members hold an equal number, and whoever wins the majority of the combined 766 votes will become the party's president.

Earlier in the week, Nikai, who is the party's No. 2 in command, said his faction will back Suga.

Key LDP figures including Suga's predecessor Abe and Diet affairs chief Hiroshi Moriyama have similarly expressed their backing for Suga even as public support for his government has dropped to a record low over its handling of the COVID-19 pandemic.

Nobuteru Ishihara, who heads an LDP faction, said its 10 members will continue to back Suga, while Foreign Minister Toshimitsu Motegi, an acting head of an intraparty group led by Wataru Takeshita, said the chief has urged him to carefully follow the situation even though the basic stance is to support the Suga government.

Suga was widely believed to be seeking to vaccinate the population against the novel coronavirus as quickly as possible, stage a successful Olympic Games to get a boost in public sentiment and dissolve the lower house for a general election after the Tokyo Paralympics end Sept. 5, looking to win the LDP leadership race unchallenged.

But less than half of the population has been fully vaccinated against COVID-19, and the government was forced to extend its state of emergency through Sept. 12 due to a sharp rise in infections during the Olympics, leading to a plunge in the Cabinet approval rate and making it difficult for Suga to stick to his original re-election plan.