Prime Minister Yoshihide Suga sent an offering and three members of his Cabinet paid visits to the war-linked Yasukuni shrine on Sunday as Japan marked the 76th anniversary of the end of World War II, sparking sharp criticism from neighboring countries. 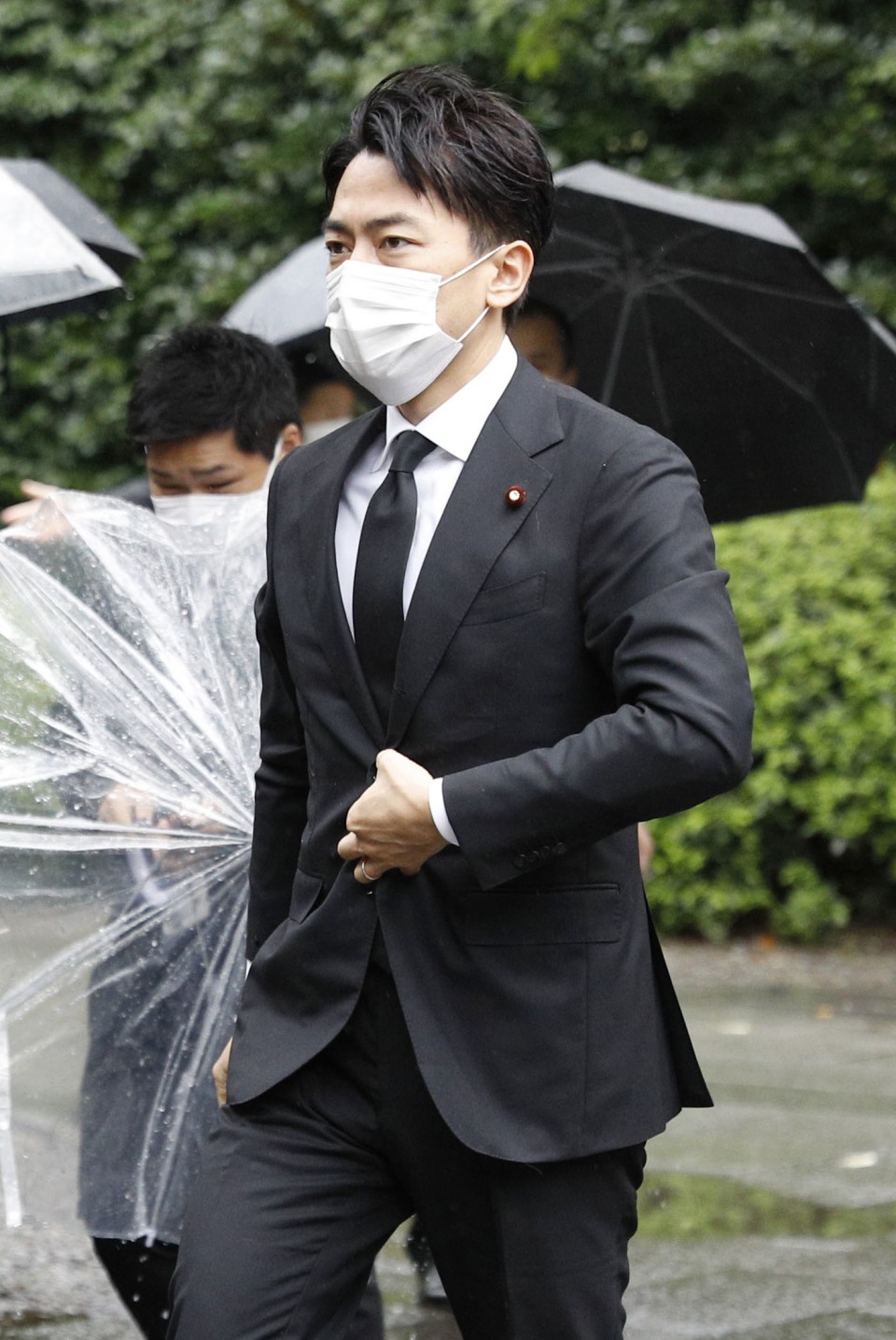 Environment Minister Shinjiro Koizumi is pictured during a visit to Yasukini Shrine in Tokyo on Aug. 15, 2021. (Kyodo)

Suga sent an offering out of his own pocket under the title of leader of Japan's ruling Liberal Democratic Party, having laid flowers at the nearby Chidorigafuchi National Cemetery before giving a speech at a memorial ceremony.

No sitting prime minister has gone to the shrine since Shinzo Abe in December 2013, a trip that strained relations with China and South Korea and prompted the United States to say it was "disappointed" by the move.

Both Koizumi and Hagiuda, the minister of education, culture, sports, science and technology, visited Yasukuni last year on Aug. 15, the day the late Emperor Hirohito announced Japan's surrender to the Allied forces, becoming the first ministers to do so since 2016.

Abe also made a trip to the shrine on Sunday, telling reporters he "paid respects to those who gave their lives for our country." Defense Minister Nobuo Kishi, Abe's younger brother, and economic and fiscal policy minister Yasutoshi Nishimura visited on Friday. 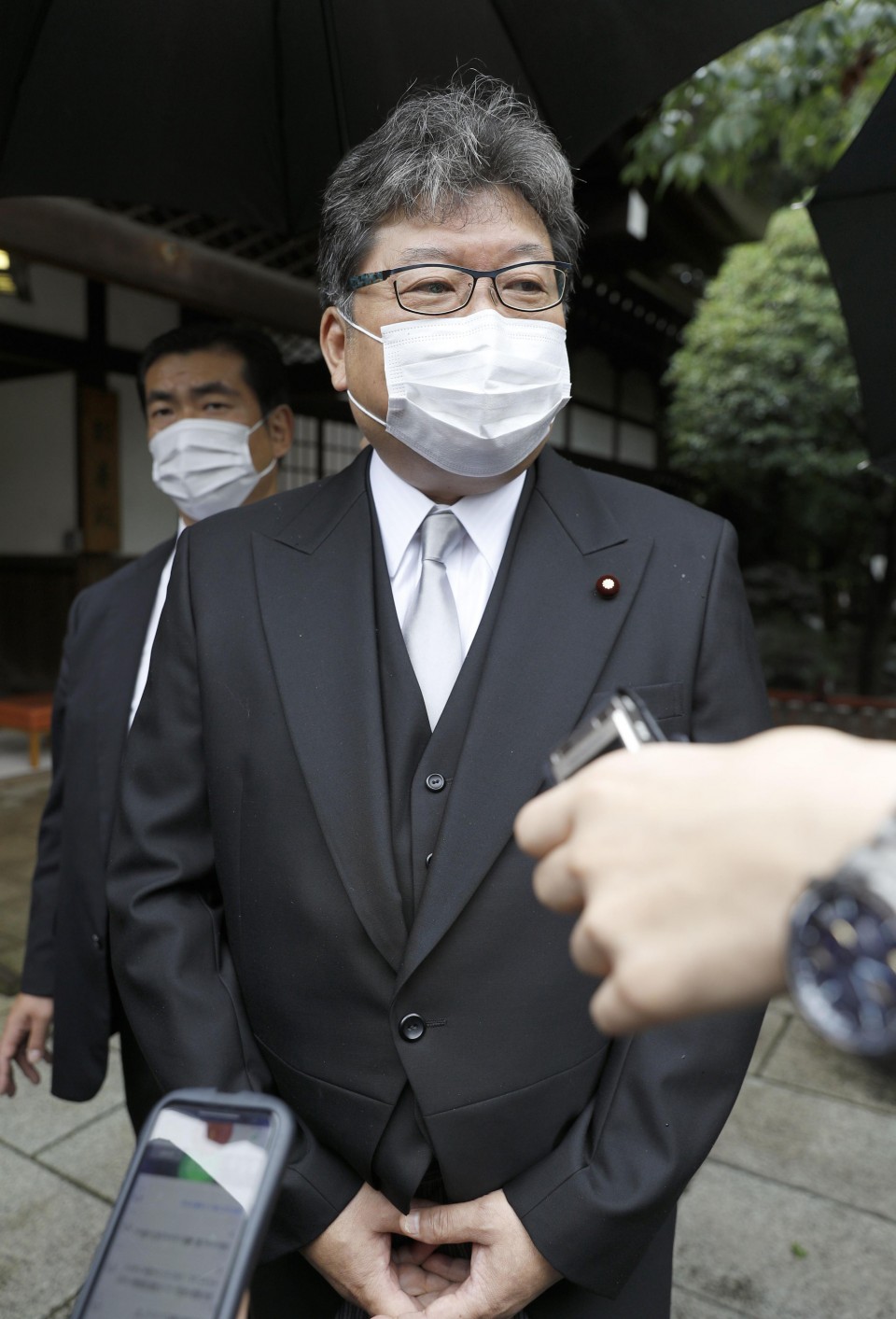 Suga's offering and the visits by the Cabinet members drew a backlash from China and South Korea, which suffered at the hands of Japan in the lead-up to and during the war.

"What some Japanese political figures have done on the issue of the Yasukuni shrine affronts historical justice and seriously hurts the feelings of people in the victimized Asian countries, including China," she said in a statement.

Established in 1869 to commemorate those that gave their lives for Japan, Yasukuni in 1978 added wartime Prime Minister Gen. Hideki Tojo and other convicted war criminals to the more than 2.4 million war dead enshrined there.

LDP policy chief Hakubun Shimomura and former Defense Minister Tomomi Inada were among the other visitors, while a cross-party group of lawmakers who go to the shrine together on special occasions did not do so on the World War II anniversary for the second consecutive year due to COVID-19 concerns. 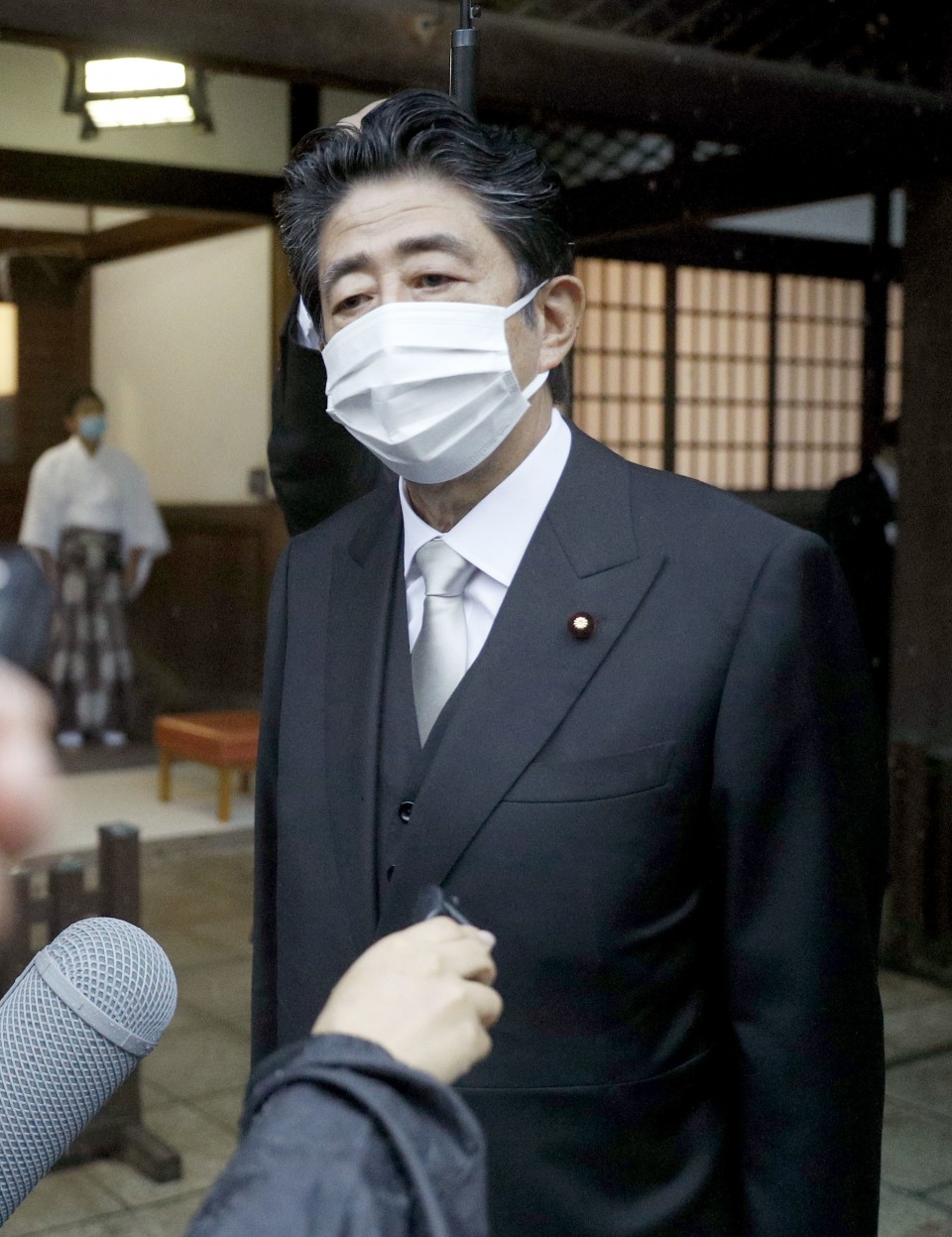 Former Japanese Prime Minister Shinzo Abe meets the press after visiting Tokyo's Yasukuni shrine, seen by China and South Korea as a symbol of Japan's past militarism, on Aug. 15, 2021. Abe visited the Shinto shrine, which honors convicted war criminals along with more than 2.4 million war dead, on the 76th anniversary of Japan's surrender in World War II. (Kyodo) ==Kyodo