An Indonesian elderly couple, Sinyo and Henny Kawilarang, tested positive for the novel coronavirus in early July. But with only mild symptoms, they decided to self-isolate at home amid a surge in cases of the highly infectious Delta variant in Indonesia.

The residents of Tangerang, in the suburbs of Jakarta, made the decision based on a doctor's recommendation. It was difficult for them to find hospitals to admit them for treatment, amid bed occupancy rates exceeding 90 percent in many health facilities. 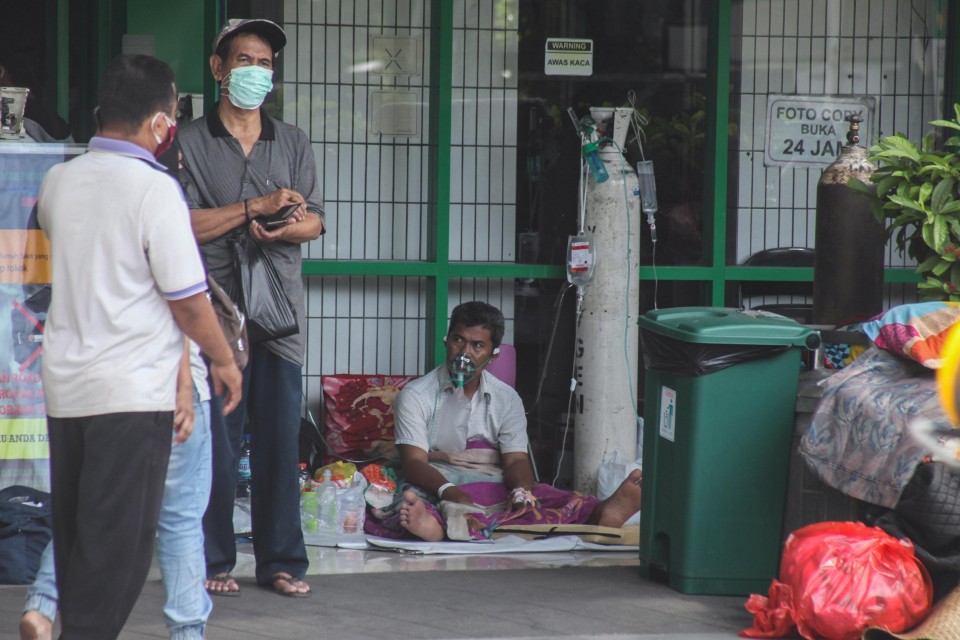 "We had only fever. Since we had been both vaccinated, we expected that we would be okay after a week," Henny, the 67-year-old wife, told Kyodo News.

They recuperated at home while taking antiviral drugs as well as vitamins to boost their immunity.

However, Sinyo did not get better even after resting for four days as he had no appetite and consumed only energy drinks.

Then the 70-year-old man quietly video-called one of his sons and said he was short of breath and wanted to be hospitalized, without telling his wife.

His four children tried to find a hospital bed and oxygen cylinders by driving around Jakarta and other nearby cities. But neither of them was available.

While waiting at home, sitting on his favorite couch, he fixed his gaze on his wife in the afternoon of July 10, six days after testing positive.

"It happened so fast," Henny said in recalling when she realized her husband was about to breathe his last and caressed his head until he closed his eyes.

"It was only for a few seconds, just like a dream," she said with tears welling up in her eyes.

The couple's story is just one of many personal accounts by bereaved individuals now self-isolating across the country, particularly on densely populated Java Island, since the Delta variant outbreak started to strike Indonesia two months ago.

The variant multiplied the number of newly confirmed cases up by 12 times from around 5,000 cases daily in early June to almost 60,000 in mid-July, though it gradually decreased to around 35,000 this month, according to the Task Force for COVID-19 Mitigation.

Yet the daily death toll remains high as the country on Tuesday last week reported 2,048, the second largest after 2,069 on July 27, while the toll was around 150 in June. 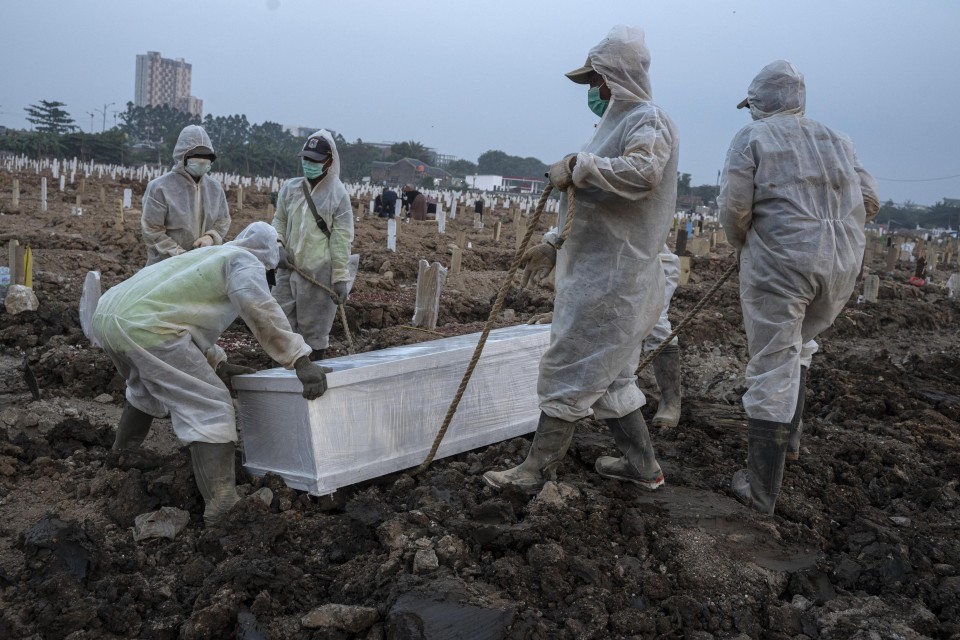 Funeral workers bury the coffins of COVID-19 victims at a cemetery on July 18, 2021, in Jakarta, Indonesia. (Getty/Kyodo)

As of Wednesday, the country's cumulative total of infections reached almost 3.9 million, with over 120,000 deaths.

The task force said that 92 percent of the current cases in Indonesia are of the Delta variant.

The surging cases have overwhelmed many hospitals, forcing them to erect makeshift tents on their yards to admit patients. Oxygen has been in short supply, a problem that once left 33 patients of a hospital in densely populated Yogyakarta, an ancient city in central Java, dying in one night alone in July.

While the government has asked people to self-isolate and use telemedicine rather than rushing to hospitals, the measure proved fatal for many.

LaporCovid-19, a Jakarta-based reporting platform run by citizens, reported that 3,007 people died across the archipelago between June 11 and Aug. 7 while either self-isolating or waiting for beds in the yards of hospitals.

"This is like an iceberg phenomenon," said Ahmad Arif, co-leader of LaporCovid-19.

"Self-isolation should be for asymptomatic patients or those with mild symptoms," he added. "But in reality, because hospitals beds are full, patients with moderate and serious symptoms have to self-isolate and this leads to fatalities."

According to Ahmad Arif, the deaths showed the lack of monitoring and support for self-isolating patients, which should be provided by the authorities.

Facing the large number of deaths among self-isolating patients, the government finally changed its policy last week, setting up centralized isolation centers to admit such patients, in a bid to prevent deaths.

But hospitals are short on staff as many of whom have died after contracting the virus while treating infected patients, causing many people to doubt if the centers work to save lives.

While families of self-isolating patients are struggling in searching for hospital beds and oxygen, those of the deceased, like Sinyo's, have faced other problems.

On the day of his death, Sinyo's children and sons-in-law had to take care of his body by themselves due to the shortage of medical workers in the subdistrict of Tangerang where he lived.

"Our public health center was temporarily closed because most of its medical workers had been infected by COVID-19," Henny said, quoting a local COVID-19 task force as saying that family members had no other option but taking care of their loved one's body by themselves.

In the case of Sinyo, neighbors collected and donated plastic sheets from their kitchens to wrap his body as well as personal protection equipment for his two sons. A coffin, something also in scarce supply, arrived late at night.

An ambulance, instead of a hearse, was finally found by luck though it had repeated engine trouble when bringing Sinyo's body to his final resting place in the morning after his death.

Henny said Sinyo and other family members always adhered to health protocols during the pandemic.

"Many lessons from what he experienced have to be learned for both the public and government to deal with self-isolating patients, particularly the elderly, so that his own fight in this pandemic war will not be in vain," she said.