Flame-lighting events for the Tokyo Paralympic torch relay began across Japan on Thursday in the lead up to the world's biggest sporting event for athletes with disabilities, despite the relay being scaled down due to the coronavirus pandemic.

A series of events related to the torch relay were held in an effort to boost momentum toward the Paralympics, which will take place between Aug. 24 and Sept. 5, and mark the transition from the just-concluded Olympics.

Flames for the Paralympics are set to be collected in over 800 municipalities across Japan and be united with the flame lit in Stoke Mandeville, England -- the spiritual birthplace of the Paralympic movement. 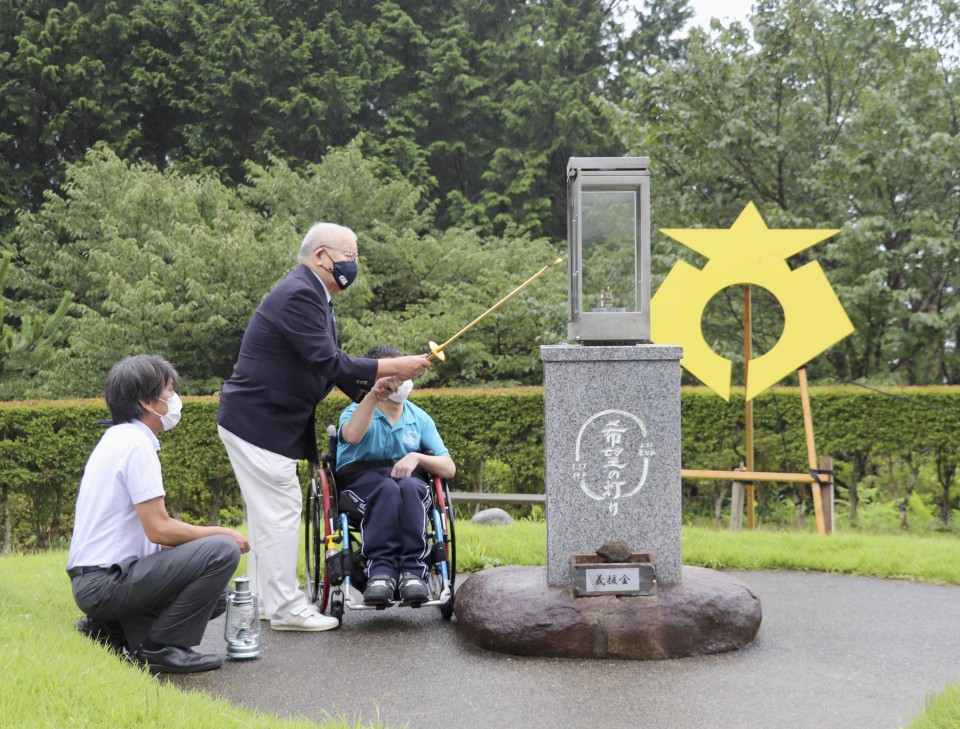 Lighting events for the Paralympics will take place over the next five days in 43 of Japan's 47 prefectures that will not stage Paralympic competitions.

Unlike the Olympic flame, which was ignited in Greece, locations and lighting methods for the Paralympics have been left up to each municipality. Some lighting events will be held in facilities for people with disabilities and schools for students with special needs, as well as areas that were devastated by natural disasters.

In Rikuzentakata, northeastern Japan, a flame was lit by Miu Takahashi, a 21-year-old nursing home worker born with brain paralysis, from a fire burning in a gas lamp symbolizing hope in the aftermath of the March 2011 earthquake and tsunami disaster.

She lit a lantern using the fire, which was transferred from a fire burning in Kobe as a monument of hope after the western city suffered the 1995 Great Hanshin Earthquake.

"It was an honor to be given the role to pass the fire, which has a long history since the Great Hanshin Earthquake, as the Paralympic flame," Takahashi said.

Between Tuesday and Aug. 20, the four prefectures that will host Paralympic events will hold flame-lighting events.

The flames lit in the host country and in Britain will be united at a ceremony in Tokyo on Aug. 20, before the torch relay in the capital is slated to begin ahead of the opening ceremony at the National Stadium.

The relay in Tokyo, originally set to feature some 700 torchbearers passing the flame over a course of around 35 kilometers, was taken off public roads due to the pandemic. Instead, runners will gather for a so-called torch kiss ceremony.

The torch relay for the Olympics was also taken off public roads during most of its 15-day leg in Tokyo last month.

The Olympics opened on July 23 and closed on Sunday.