The Japanese government said Tuesday it will buy marine products as an emergency step to support fishermen if the planned discharge of treated radioactive water from the crippled Fukushima nuclear plant into the sea causes damage to their sales.

The government is eyeing creating a fund that can be flexibly operated to buy seafood from Fukushima Prefecture and other parts of Japan, according to a plan compiled to help fishermen threatened by reputational damage, government officials said. 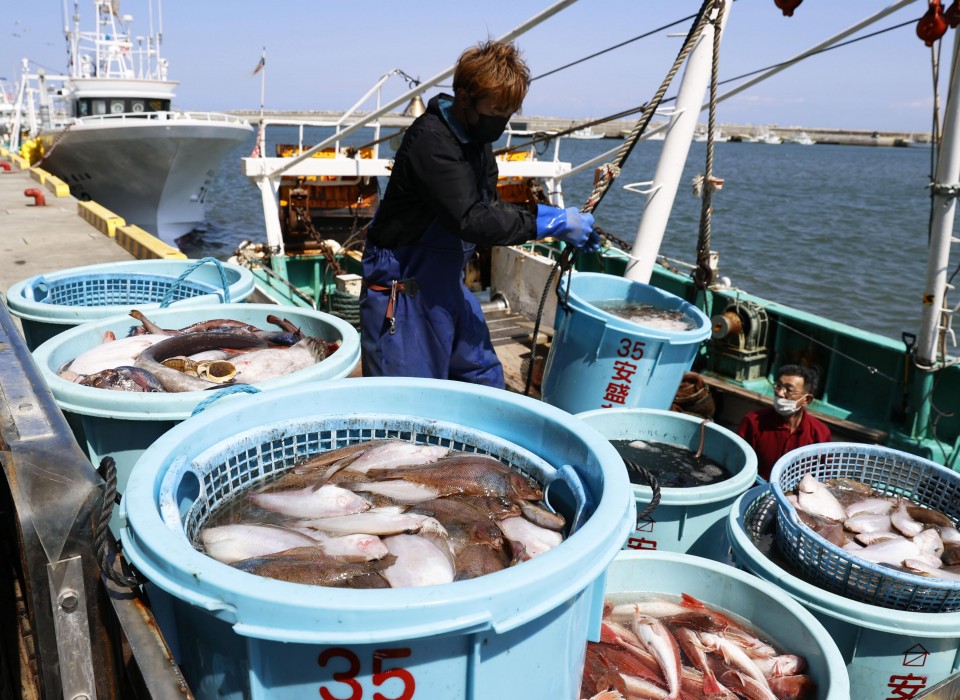 A fisherman lands fish at a port in Soma in Fukushima Prefecture on April 12, 2021. (Kyodo)

The move came amid calls from fishermen to come up with specific measures to prevent reputational damage to marine products following the government's decision in April to start discharging the water from around spring of 2023.

"We will make thorough efforts to prevent reputational damage being caused and will create an environment where (fishermen) can continue operations feeling assured even if reputational damage occurs," said Chief Cabinet Secretary Katsunobu Kato at a meeting of Cabinet ministers involved in the plan.

Under the measures, the government will temporarily buy and store products that can be frozen or help fishermen expand sales channels for those that cannot be frozen, if demand for domestically produced seafood drops sharply in and outside Japan, the officials said.

The size and details of the envisaged fund are yet to be determined, the officials said.

The government will also instruct the plant's operator, Tokyo Electric Power Company Holdings Inc., to show a specific framework for compensation at an early date to work as a safety net in case fishermen suffer losses despite thorough implementation of measures against reputational damage, they said.

TEPCO President Tomoaki Kobayakawa, who also attended the meeting, told reporters that he will take the government's instruction "seriously," adding his company will announce plans for compensation and the water release "as early as possible."

The government has said its decision to allow TEPCO to discharge the water poses no safety concerns, but it has triggered an outcry from local fishermen and neighboring countries such as China and South Korea.

To grasp how domestic consumers and people overseas view the safety of the treated water, the government will also conduct an online survey and create a system to prevent reputational damage from arising, the officials said.

The government will offer thorough explanations over the safety of the treated water to businesses involved in processing, distribution and retailing of marine products in order to avoid prices of local marine products falling to unreasonably low levels.

Japan also plans to work closely with organizations such as the International Atomic Energy Agency to increase transparency and international credibility.

The government plans to compile a medium- and long-term action plan by the end of this year, covering the period after the discharge of the treated water. It will continue hearing views from parties concerned to add necessary measures, the officials said.

More than 1 million tons of treated water has accumulated at the complex since a massive earthquake and tsunami triggered a triple meltdown at the Fukushima Daiichi plant in March 2011.

The process removes most radioactive materials including strontium and cesium but leaves behind tritium, which is said to pose little health risk in low concentrations.