The United States on Monday announced sanctions against Belarusian individuals and entities over allegations of attacks on democracy and acts of repression, with the country's Olympic committee included as a target of the measures after an athlete was pulled from the Tokyo Games against her will by the national team.

The move was taken on the one-year anniversary of Belarus' most recent presidential election, in which Washington says incumbent Alexander Lukashenko fraudulently declared victory and has since embarked on a campaign of "violence and repression."

Criticizing the actions of the Lukashenko regime as "an illegitimate effort to hold on to power at any price," U.S. President Joe Biden noted that thousands of peaceful protesters have been detained and more than 500 activists, civil society leaders and journalists have been imprisoned. 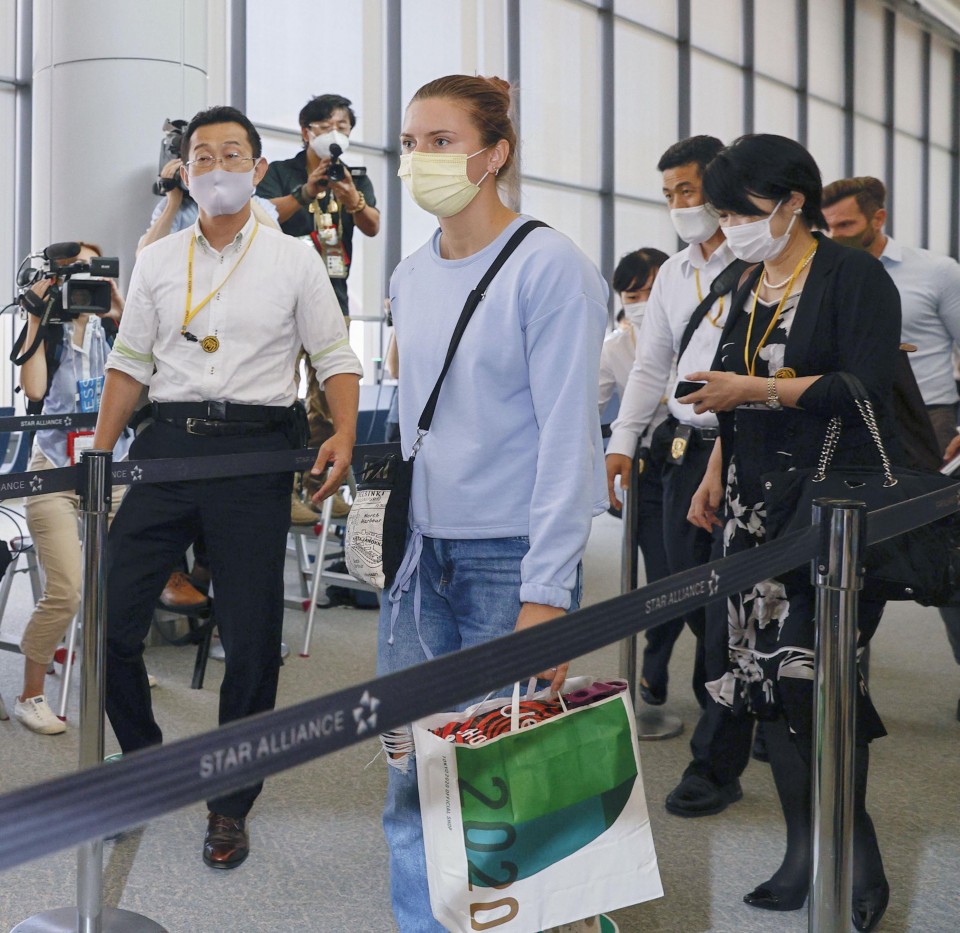 Belarusian sprinter Krystsina Tsimanouskaya walks to take a flight at Narita airport near Tokyo on her way to Poland, which has offered her asylum, having earlier refused to board a flight back home after being pulled from the Tokyo Olympics against her will. (Kyodo) ==Kyodo

In line with an executive order signed by Biden on Monday, the U.S. Treasury Department sanctioned 44 individuals and entities, including the Belarusian National Olympic Committee.

The committee allegedly serves as a tool for Lukashenko and his inner circle to launder funds and evade sanctions, the government said, adding that the organization has also been publicly reprimanded by the International Olympic Committee for its failure to protect Belarusian athletes from political discrimination and repression.

Belarusian sprinter Krystsina Tsimanouskaya refused to board a flight back home during the Tokyo Olympics, which ended Sunday, and sought protection from Japanese police at Tokyo's Haneda airport.

She said at the time that she was being forced to return to Belarus for criticizing her coaches on social media and that she feared for her safety if she went home.

The athlete has arrived in Poland and was granted a humanitarian visa by the Eastern European country.

Citing the case, U.S. Secretary of State Antony Blinken said in a statement that such acts of "transnational repression cannot be tolerated and must stop."

"The United States stands in solidarity with our allies and partners in responding to these threats," he added.

Belarus runner arrives in Poland as refugee after row with team