A Belarusian athlete who was pulled from the Tokyo Olympics against her will and refused to board a flight back home has been granted a humanitarian visa by Poland, a senior diplomat of the country said Monday.

Krystsina Tsimanouskaya "is already in direct contact with Polish diplomats in Tokyo," tweeted Marcin Przydacz, undersecretary of state for security at the Polish Foreign Ministry. "Poland will do whatever is necessary to help her to continue her sporting career."

Kryscina Tsimanouskaya a Belarusian athlet is already in direct contact with Polish diplomats in Tokyo. She has received a humanitarian Visa. Poland will do whatever is necessary to help her to continue her sporting career. 🇵🇱 always stands for Solidarity.

The development came a day after the 24-year-old sprinter was taken to Tokyo's Haneda airport after criticizing her coach and asked the International Olympic Committee to intervene.

Japan's top government spokesman Katsunobu Kato said Tsimanouskaya, who sought protection by police at the airport, is in a "safe situation with the cooperation of related organizations." The IOC said it is seeking clarification on the incident from the Belarusian National Olympic Committee.

The sprinter had complained via social media that she was entered in the 4x400 meter relay despite having never competed in the event. She ran in the 100 meters but did not qualify for the semifinals and had been due to make an appearance in the 200-meter heats on Monday but did not compete. 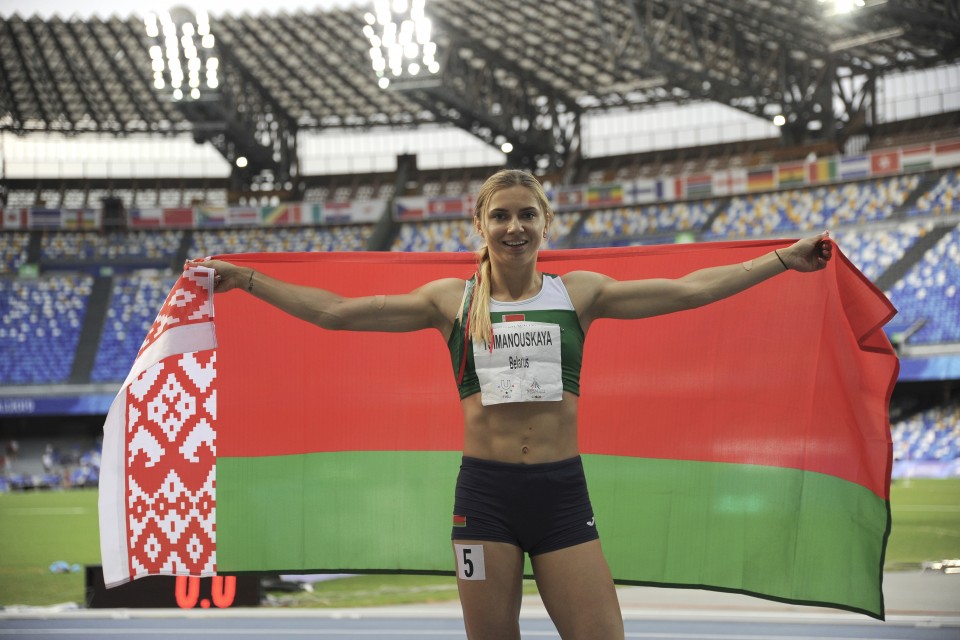 Krystsina Tsimanouskaya of Belarus is pictured at the Summer Universiade in July 2019 in Naples, Italy. (Getty/Kyodo)

"I've been put under pressure, and they are trying to take me out of the country without my consent," Tsimanouskaya said in a video posted on social media.

The Belarusian National Olympic Committee said in a statement that it withdrew her from the games "based on doctors' advice regarding her emotional and psychological state."

The national committee is headed by Viktor Lukashenko, son of the country's President Alexander Lukashenko. Both have been banned from attending the Tokyo Olympics amid allegations of discrimination against athletes who took part in protests against the president's controversial re-election in August 2020.

"I'm afraid that in Belarus, I may be imprisoned. I'm not afraid of being fired or kicked out of the national team. I worry about my safety," Tsimanouskaya was quoted as saying by the Belarusian Sport Solidarity Foundation, a group that supports athletes persecuted for their political views.

Tsimanouskaya was seen entering the Polish Embassy in Tokyo on Monday after Przydacz tweeted that his country is prepared to give her a visa, saying she is "free to pursue her sporting career in Poland if she so chooses."

She will stay at the embassy until she departs for Warsaw accompanied by a Polish consul, according to Pavel Latushka, head of the Belarusian opposition group National Anti-Crisis Management.

IOC spokesman Mark Adams said earlier in the day she spent the night at a hotel near the airport and was in touch with authorities including the Office of the U.N. High Commissioner for Refugees.

Several other European countries had offered to assist Tsimanouskaya, with Slovenian Prime Minister Janez Jansa tweeting that she is "welcome" in his country.

"The Czech Republic is ready to help," Foreign Minister Jakub Kulhanek said on Twitter, calling the incident "scandalous" and offering to issue her a visa and provide help through the Czech Embassy in Tokyo.