An annual memorial service for a dozen young American soldiers and a Japanese pilot who died in two separate aircraft accidents just before and after the end of World War II will resume at a small stone monument erected for them in the town of Takachiho, Miyazaki Prefecture, at the end of August after being canceled last year due to the coronavirus pandemic.

Over time, local residents had all but forgotten the two accidents, which occurred when the planes came down on a local mountainside. But in the autumn of 1987, they came to fresh light when local historian Hiroshi Kudo, 67, came across parts of the crashed U.S. B-29 bomber when he climbed Mt. Oyaji to survey the presence of Asian black bears. 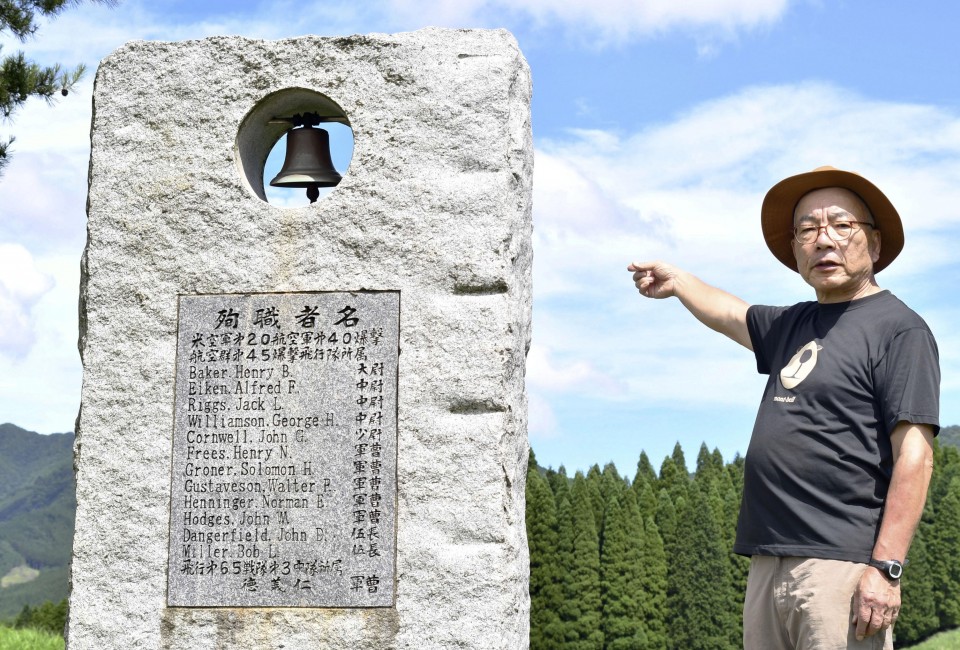 Photo taken on July 5, 2021, shows Hiroshi Kudo explaining about two separate accidents that occurred, claiming the lives of a dozen U.S. soldiers and a Japanese pilot, in front of the stone monument that honors them in Takachiho, Miyazaki Prefecture, southwestern Japan. (Kyodo)

In the absence of local records or press reports from the time, Kudo began to look into the B-29 crash on his own, seeing it as something he was "destined" to do given that he had come across the wreckage, he recalled.

After gathering what information they could about the crash, which occurred on the morning of Aug. 30, 1945, roughly two weeks after the announcement of Japan's surrender, Kudo and other residents in Takachiho proposed building a stone monument to pass down the memory of the accident to future generations.

During the process of the investigation, details also emerged about the crash of a Japanese Hayabusa fighter plane near the same site just a few weeks earlier, on Aug. 7, 1945.

The monument was completed in the mountainous area in 1995, the 50th anniversary of the war's end, using donations from people within and outside the town.

The four-engine B-29 aircraft had left Tinian, one of the Northern Mariana Islands, in the western Pacific Ocean, to deliver relief supplies to a camp in Fukuoka Prefecture where newly freed Allied prisoners of war had been held during the war, according to reports from the U.S. military and other sources.

Amid bad weather, the plane crashed into the northwestern slope of the mountain, killing the 12 U.S. personnel aboard, who ranged in age from their teens to their 20s.

Local villagers rushed to the crash site to gather the scattered supplies.

"We picked up cans of pineapple, instant coffee and anything we could get our hands on, including parachutes and oxygen cylinders, because everybody was desperately struggling to survive," Keisuke Takeda, 86, said, recalling that he visited the site with his father three times.

A trail naturally formed in the mountains as people flowed to the site from neighboring Kumamoto and Kagoshima prefectures, among other areas.

The other accident occurred on Aug. 7, just as the war was drawing to a close. Piloted by Sgt. Gijin Toku, who was 21, the fighter was on its way from the Metabaru airfield in Saga Prefecture, a training site of the kamikaze special attack unit, to the Korea Strait for night navigational exercises before it crashed.

Although government documents placed the crash site in the Korea Strait, residents in Takachiho found the fighter's fuselage in the mountains. They also buried the body of Toku in the military cemetery in the town.

A small-scale memorial service, dubbed "Prayer for Peace," for the 13 young men who died in the line of duty had been held every year until last year's cancellation due to the pandemic.

The 12 Americans included Lt. Alfred Eiken, who was 23 at the time of his death. 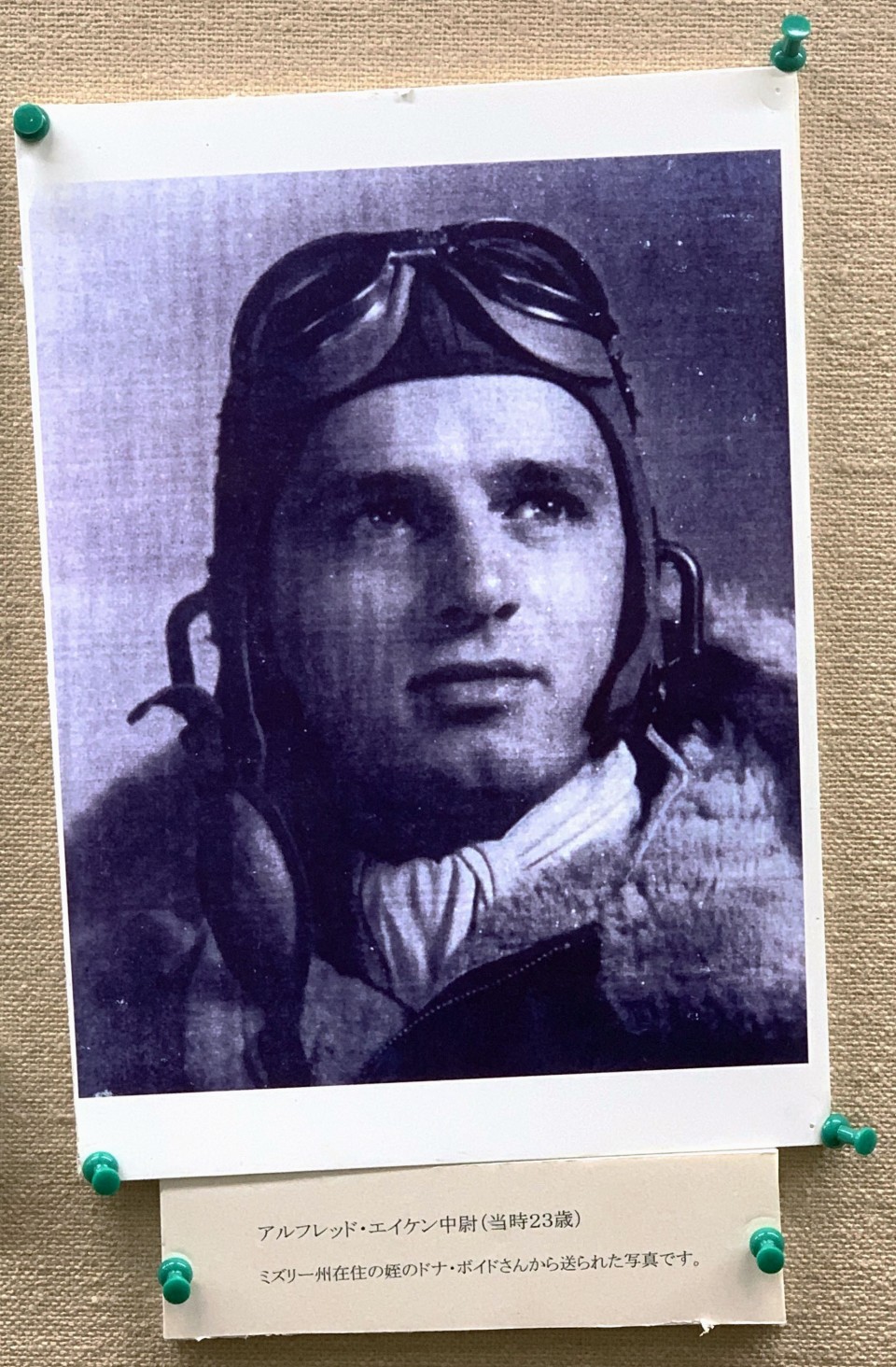 His younger sister Kelly Meyer, now 81, who lives in Missouri, visited Takachiho in 2015 to attend the service for the first time on the 70th anniversary of the end of the war.

In an interview in July, Meyer said her brother's death had struck home when she saw the debris of the crashed B-29 with her own eyes at the local history museum and expressed her gratitude to Kudo and others for discovering it.

"My brother is my hero," said Meyer, adding that his drama has finally come to an end.

The memorial service this year will be attended by, among others, local elementary school students. "These 13 young lives would not have been lost if not for the war. We will pass down the memory to younger generations so that this does not end as a story of a distant war," Kudo said. 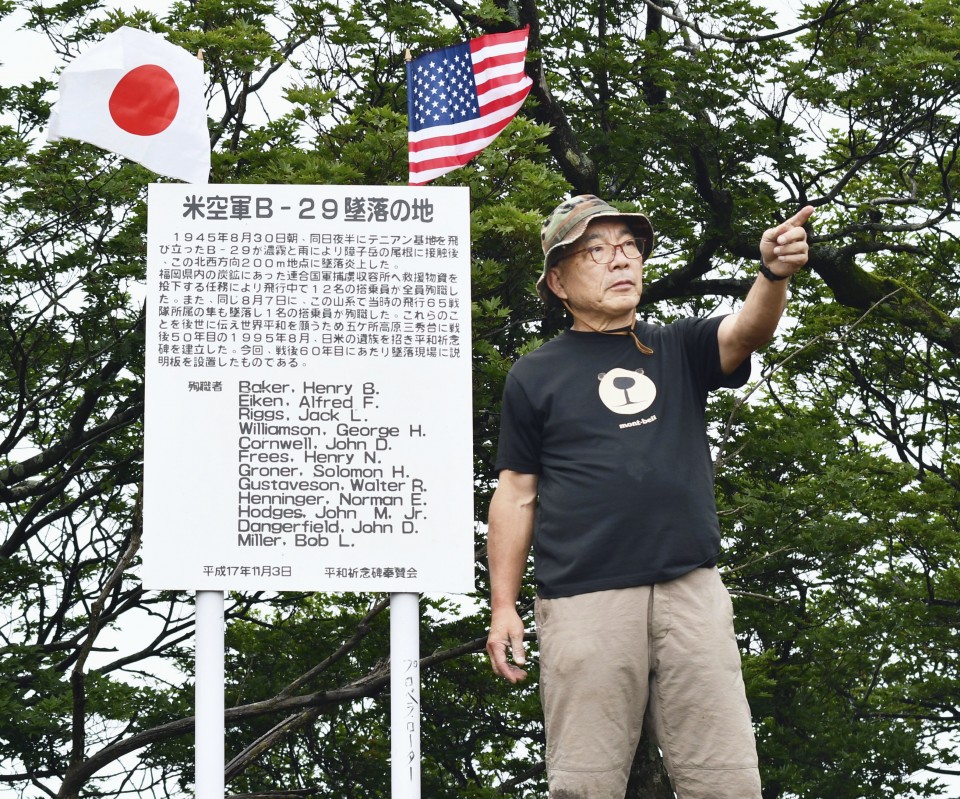 Photo taken on July 5, 2021, shows Hiroshi Kudo explaining about an accident of a U.S. B-29 bomber near the site where it crashed in Takachiho, Miyazaki Prefecture, southwestern Japan. (Kyodo)