An Olympic softball player's gold medal that was bitten by the mayor of Nagoya, landing him in trouble when the central Japanese city received more than 7,000 complaints, will be exchanged for a new one, a source close to the matter said Thursday. 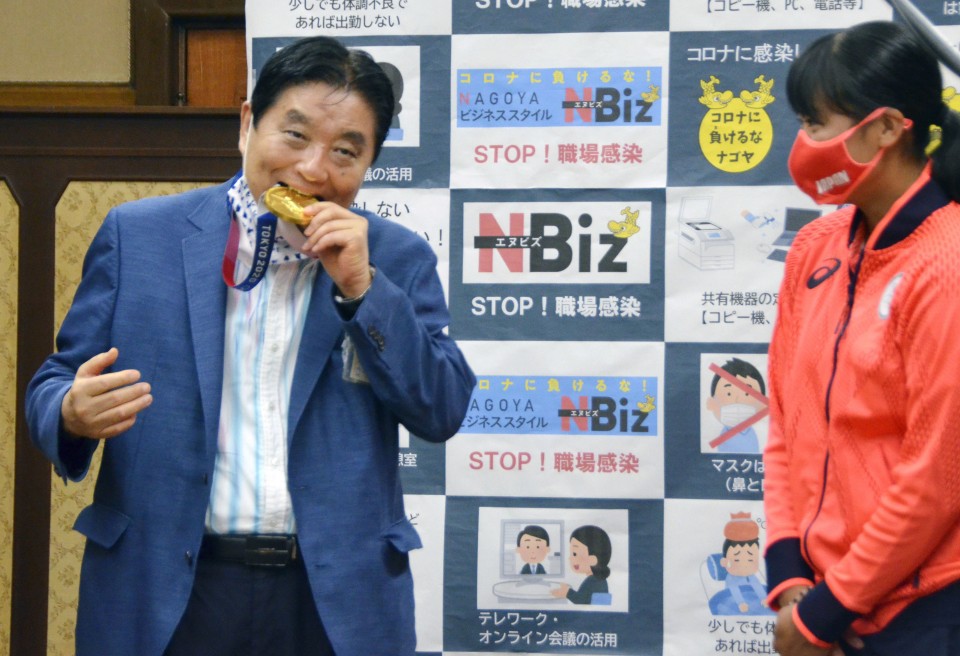 Last week, Kawamura came under fire for removing his mask and putting the medal between his teeth to pose for photos during an event celebrating the medal-winning athlete who hails from Nagoya, despite hygiene concerns during the coronavirus pandemic.

Kawamura's stunt occurred when Goto, 20, visited Nagoya's city hall to report the victory on Aug. 4. He gestured her to place the medal around his neck and made remarks and jokes of a sexual nature.

"Are you prohibited from having romantic relationships?" he was heard saying to Goto.

After first denying his remarks constituted sexual harassment, Kawamura admitted they had been inappropriate, while spinning them as an honest error in judgement.

"I deeply regret making her uncomfortable with remarks that went too far," he said. "When I ask a young person if they have a boyfriend or girlfriend, it allows them to relax and speak more. As a mayor it's important to put people one is talking to at ease."

Kawamura said he "received guidance" from Japanese Olympic Committee head Yasuhiro Yamashita, to whom he expressed his desire to pay for the replacement cost.

"I hope the arrangements are made in line with Ms. Goto's wishes, or as close as possible," Kawamura said.

According to the source, the International Olympic Committee, JOC and Tokyo Olympic organizers coordinated to make the exchange possible, and Goto agreed.

Goto is expected to get a replacement for the medal soon. Japan won softball gold by defeating the United States 2-0 in a rematch of the 2008 Beijing Olympic final.

Kawamura was immediately pilloried on social media, where some Olympians questioned the need for a courtesy call and others posted the hashtag #respectathletes.

Kawamura later apologized for ignoring COVID-19 protocols and for "acting on impulse" and "making the symbol of years and years of hard work dirty."

Olympic organizers appeared to make light of the incident when they tweeted a reminder recommending athletes do not bite medals, saying, "We just want to officially confirm that the #Tokyo2020 medals are not edible!"