Swimmer Naohide Yamaguchi won the men's SB14 100-meter breaststroke gold for Japan on Sunday to take the host nation's third title at the Tokyo Paralympics and second in the pool.

Yamaguchi improved his own world record with a 1-minute, 03.77-second time to beat Australian Jake Michel by 0.51 at the Tokyo Aquatics Centre. Scott Quin of Britain won bronze. 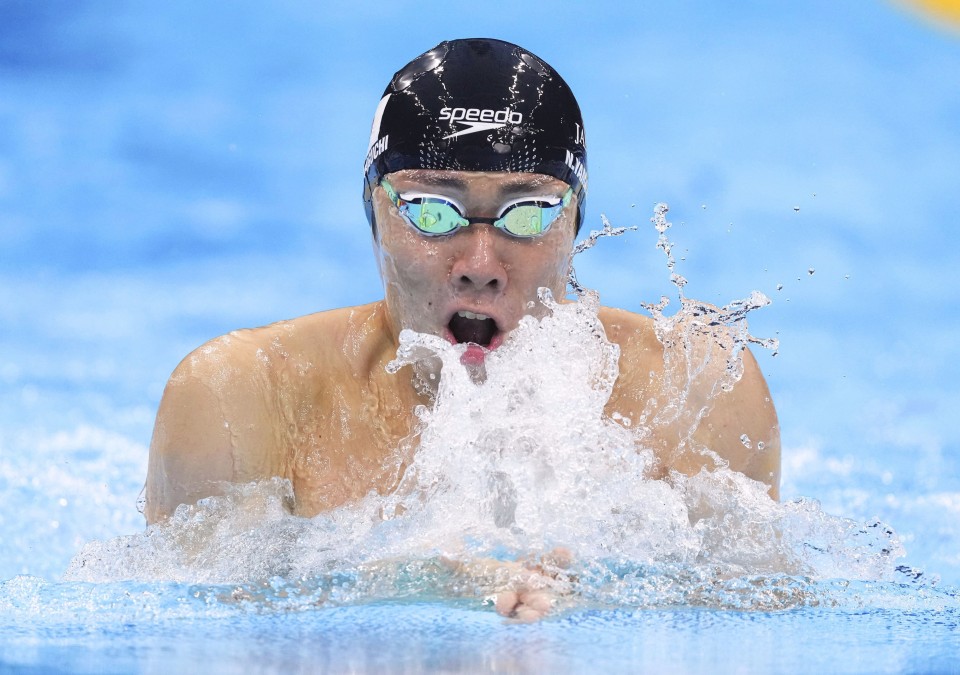 Naohide Yamaguchi of Japan competes in the men's SB14 100-meter breaststroke final en route to winning gold in a world record time at the Tokyo Paralympics on Aug. 29, 2021, at Tokyo Aquatics Centre in the Japanese capital. (Kyodo) ==Kyodo

"I am glad that I was able to complete my two challenges, which were extending my world record and winning gold," said Yamaguchi, who has an intellectual impairment.

"I really tried to turn up the pace in the final."

Yamaguchi, who is competing in his first Paralympics, came into the games as a medal favorite, having won the event at the world championships in September 2019. He had only made his international debut some six months earlier.

In a tight race, Yamaguchi finished the first 50 meters just 0.1 second ahead of Michel, a 23-year-old Paralympic debutant, before extending the lead down the stretch. He trimmed 0.23 off the world record he established in May this year in Yokohama.

"I saw (Michel) really briefly when I made my turn, and I thought he was really close. But I focused on swimming like I always do," he said.

"I've been competing in butterfly and relay events here, so I think I've been able to get accustomed to the atmosphere of the venue and gain a better sense of the water."

A native of Ehime Prefecture in western Japan, Yamaguchi was diagnosed with autism when he was 3 years old.

In competitive swimming, he was a late bloomer, having finished in last place in a 200-meter freestyle event in 2017 at a national tournament for swimmers with intellectual impairment. But he quickly improved and moved to new heights.

"As a competitor in the SB14 class, I have been able to interact with athletes with disabilities from around the world and share the different challenges we face," he said. "I think that is the attraction of swimming."

He was the first swimmer from Japan to book a ticket to the Tokyo Paralympics, which were postponed for one year due to the coronavirus pandemic.

Before winning gold on Sunday, Yamaguchi had finished fourth in both the men's S14 100 butterfly and in the 4x100 freestyle relay. In the former, he missed a medal by just 0.21.

Yamaguchi already has new determination as a Paralympic champion, he said.

"As a Paralympic gold medalist, I want to pull off a performance like I did today whenever I compete from now on."