After taking a 4-1 lead, the 23-year-old Kawai survived a late fightback from 2019 world champion Tynybekova to win gold in her first Olympics. 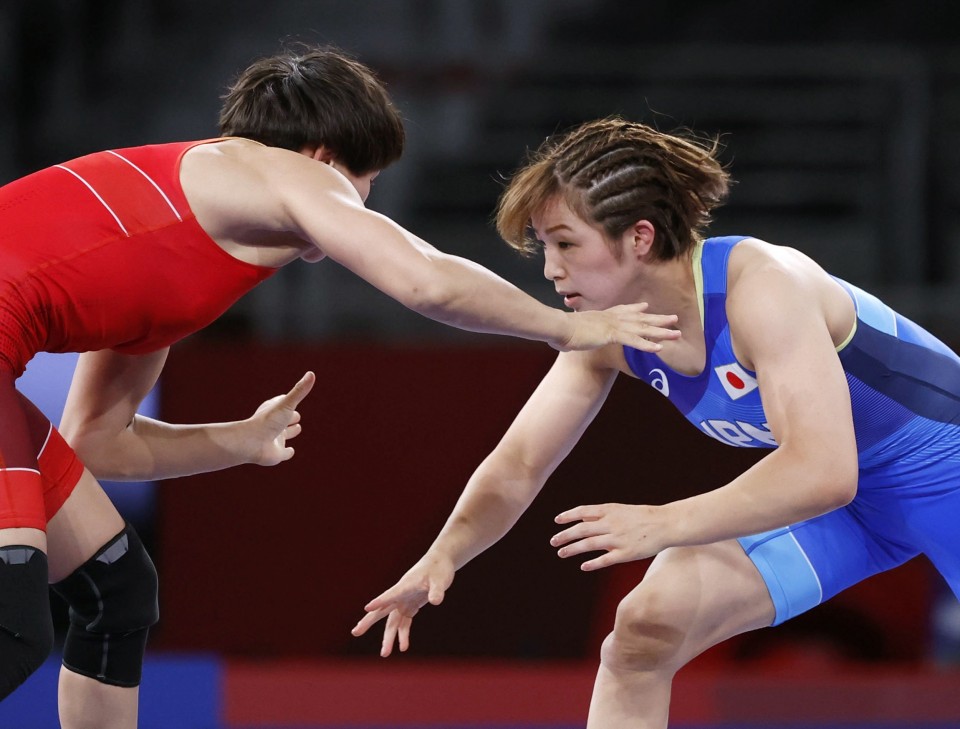 Yukako Kawai of Japan (blue) competes in the women's wrestling freestyle 62-kilogram final against Aisuluu Tynybekova of Kyrgyzstan at the Tokyo Olympics on Aug. 4, 2021, at Makuhari Messe Hall in Chiba near Tokyo. (Kyodo) ==Kyodo

The sisters are aiming to become the second pair of Japanese siblings to capture gold medals at the Tokyo Games following judoka Hifumi and Uta Abe.

Risako, who won 63-kg gold at the Rio de Janeiro Games, moved down to 57 kg to clear the way for Yukako to earn Olympic selection in the subsequently revised 62-kg weight class.

Yukako conceded a point to Tynybekova after being hit with a passivity shot clock in the opening period, but moments later took her opponent to the mat to go up 2-1.

With Tynybekova fighting to make up the deficit in the second period, the Japanese earned a further two points with a takedown from behind. Tynybekova closed the gap with a two-point takedown with 4.3 seconds left, but Kawai held firm as the final seconds ticked off the clock.

"This is really like a dream. I'm glad to get the gold medal that I had been dreaming about," said Yukako, who celebrated victory as a tearful Risako watched from the stands.

"Until now, I'd only been in second and third place, and I've lost when I needed to push a little further. I was really happy to hear them say 'Olympic champion' and it was a great day. My sister's match still remains. But I think I have passed the baton to her in good way." 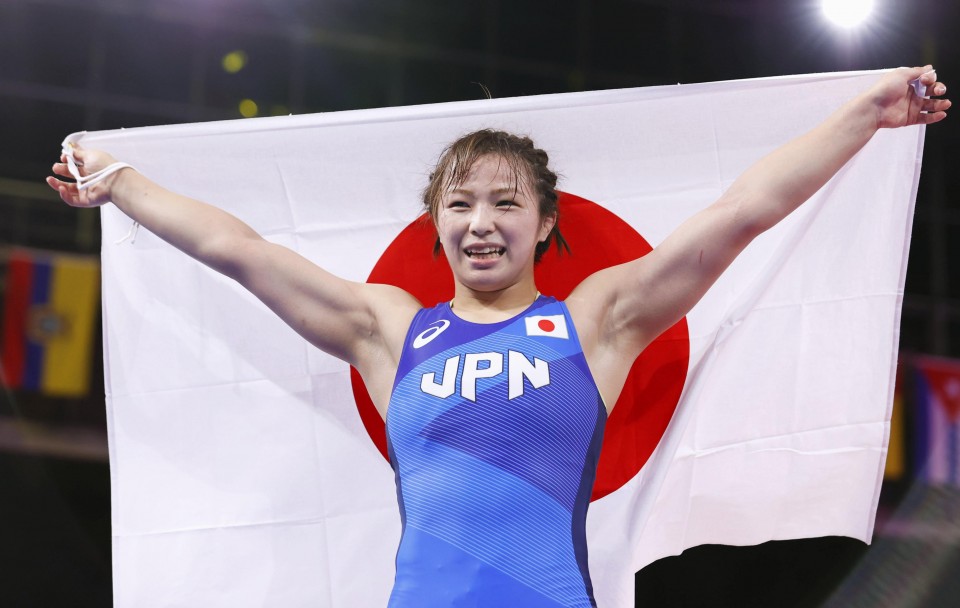 Yukako Kawai of Japan celebrates after winning the women's wrestling freestyle 62-kilogram final against Aisuluu Tynybekova of Kyrgyzstan at the Tokyo Olympics on Aug. 4, 2021, at Makuhari Messe Hall in Chiba near Tokyo. (Kyodo)==Kyodo

In a closely fought semifinal, Risako earned her points following a passivity clock in each period against Maroulis, who won 53-kg gold in Rio by beating Japan's Saori Yoshida in the final.

"When I got into a clinch (with Maroulis), I thought the opponents I always train against are heavier, and the force was different. In that moment, I thought I could manage (this bout) and had to go for broke," she said. "I wasn't able to score points properly, but I had a feeling this wasn't a bad bout."

The older Kawai sister will face Iryna Kurachkina of Belarus in Thursday's final. Kurachkina advanced to the gold-medal match by blowing away Bulgaria's Evelina Nikolova 11-0 in the semifinals.

Natives of Ishikawa Prefecture in central Japan, the Kawais are the first Japanese sisters to have both won gold medals at the Summer Olympics.

Yukako, who qualified for the Olympics with a bronze medal at the 2019 world championships, thanked her family for supporting her while she struggled through a run of injury setbacks.

The newly crowned champion also thanked her fans and "everyone who helped hold these Olympics."

"Standing here on this mat in Tokyo was my goal, and being chosen for the team and then (even after) having the games postponed, it's what I always strived toward," she said.

Japan's Sohsuke Takatani bowed out of the men's 86-kg freestyle after losing his opening match to Turkey's Osman Gocen on points. Iran's Hassan Yazdani, who won gold in Rio at 74 kg, will face American David Taylor in the 86-kg final on Thursday. 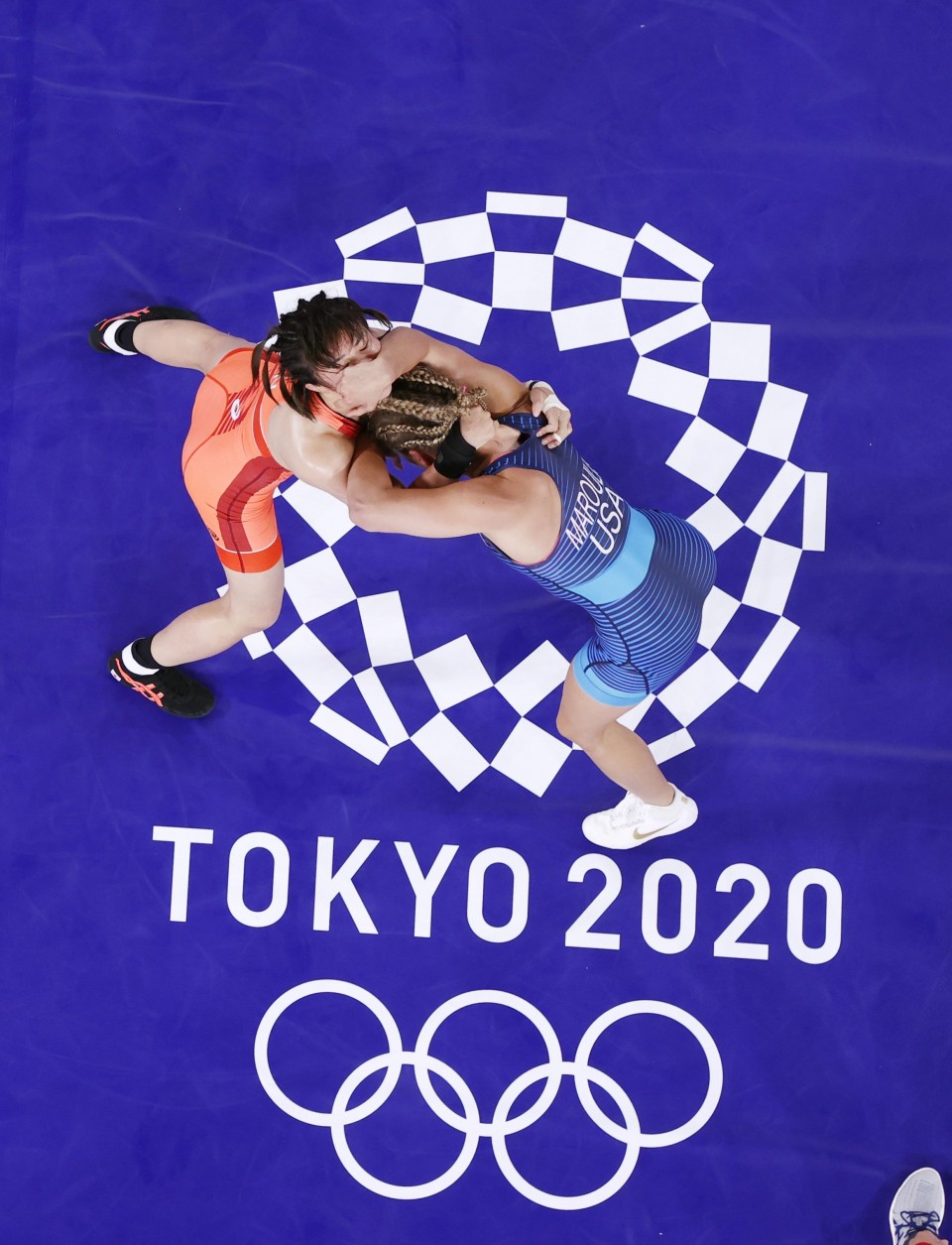 Risako Kawai (red) of Japan and Helen Louise Maroulis of the United States compete in the women's wrestling freestyle 57-kilogram semifinal at the Tokyo Olympics on Aug. 4, 2021, at Makuhari Messe Hall in Chiba near Tokyo. (Kyodo)