Japan's Paralympians to continue medal momentum in Tokyo's other games

The Olympics provided some much-needed distraction to a world dealing with the coronavirus pandemic, now Tokyo's summer of sport continues with Paralympians taking the stage.

Some 4,400 athletes are readying to compete in 539 events across 22 sports in 19 venues located across Tokyo and three nearby prefectures. Zero tickets will be sold to regular spectators, though, as organizers look to limit the spread of the virus that caused the opening ceremony to be postponed by one year to Aug 24, 2021. 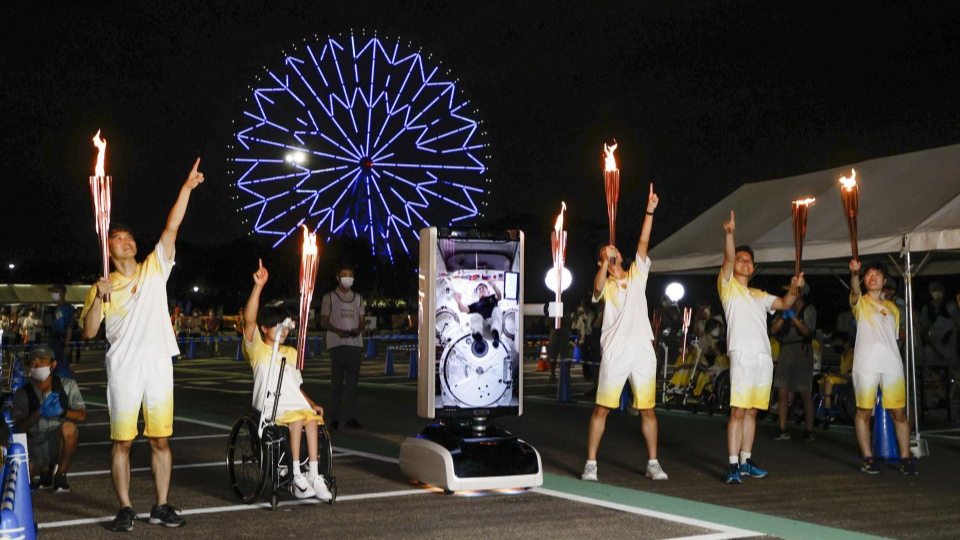 A flame-lighting ceremony for the Tokyo Paralympics is held at a seaside park in Tokyo's Edogawa Ward on Aug. 21, 2021. (Kyodo) ==Kyodo

Athletes who are big names in their respective sports will compete alongside newcomers looking to make their mark. The advances in prosthetic devices and in wheelchair technology have contributed to significant growth in para-sport, increasing participation and making the improbable possible.

The Japan team's most recent Paralympic experience was quite underwhelming, not because there was a disappointing lack of medals but because of the 24 totaled in Rio de Janeiro in 2016, none were gold.

Japan's Paralympic committee stated in early 2020 it is looking to win a mammoth 20 gold medals in Tokyo, three more than the nation won in Seoul in 1988 and in Athens in 2004 and 19 more than it won when the country hosted the first Paralympics in 1964.

Well-known athletes such as wheelchair tennis players Shingo Kunieda and Yui Kamiji are expected to carry some of the gold medal burden, while rising stars like swimmer Dai Tokairin, the reigning SM14 men's 200-meter individual medley world champion, and two-time Paralympic silver medalist wheelchair racer Tomoki Sato, can do their part, too. 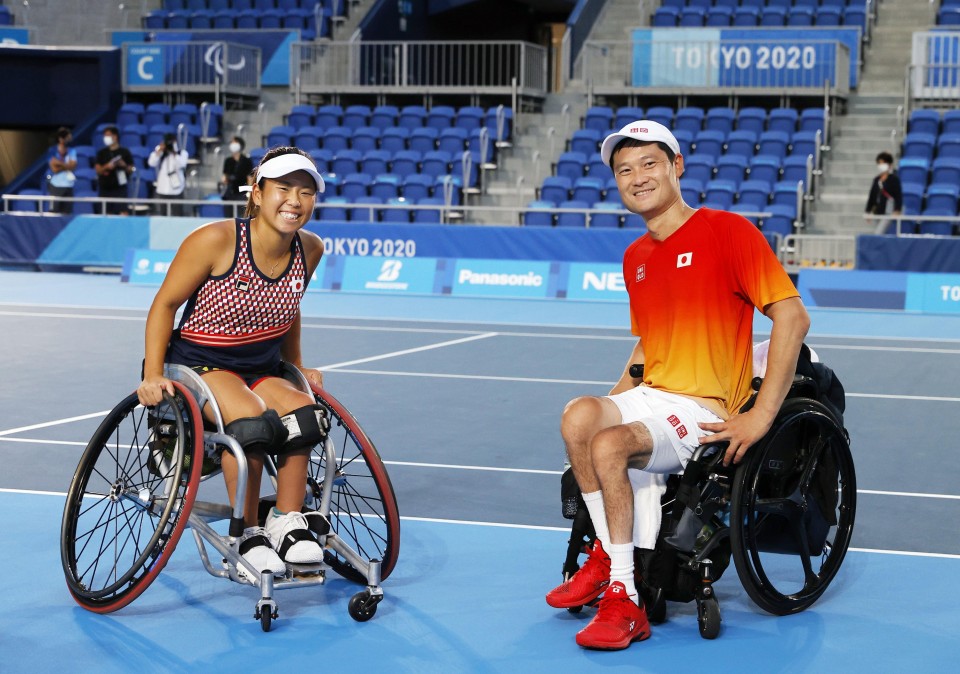 Japanese wheelchair tennis players Yui Kamiji (L) and Shingo Kunieda pose for a photo on Aug. 22, 2021, as they take part in an official practice session for the Tokyo Paralympics at Ariake Tennis Park. (Kyodo) ==Kyodo

After taking silver in the T12 women's marathon in 2016, visually impaired runner Misato Michishita laid down a gold medal marker when she set a new world record in her classification in late 2020, putting her among the favorites in 2021.

Japan also has hope of winning a first gold medal in wheelchair rugby, with the mixed-gender squad led by imposing 43-year-old Daisuke Ikezaki looking to better the bronze they won in 2016.

Veteran Ikezaki was a key factor in Japan's 2018 world championships final victory over Ryley Batt's Australia, the Japanese named tournament MVP as his team stole the title from the two-time reigning Paralympic gold medalist team on home soil in Sydney.

Goalball and boccia are the two Paralympic sports which have no equivalent in the able-bodied Olympics.

The Japanese boccia team, Fireball Japan, must overcome powerhouse Thailand and the team's ace, Watcharaphon Vongsa, to go one better than their 2016 silver medal. Boccia is played by athletes in wheelchairs who have any kind of severe impairment that affects motor function.

Japan is not expected to feature in the medal conversation in the other team sports.

Nine of the 12 goalballers who helped the United States win the men's silver and women's bronze in Rio are returning for the Tokyo Games. In goalball, a team sport for visually impaired players, participants attempt to roll a jingling ball into the opponents' net for points.

The Americans are looking to make it back-to-back gold in men's wheelchair basketball, a sport in which the team has had surprisingly little success in the last two decades. 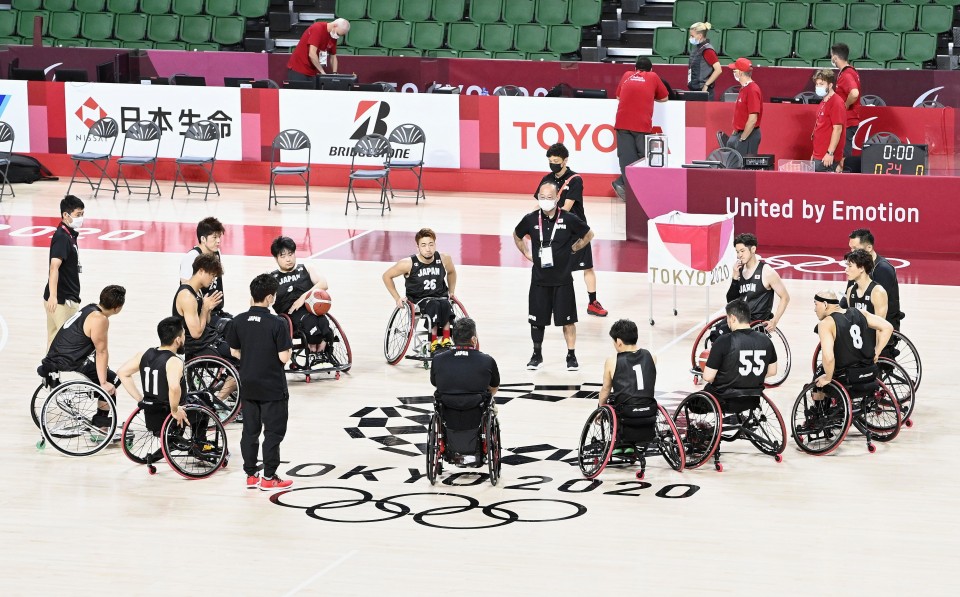 In the women's wheelchair basketball, which was introduced in 1968, Germany, Australia and the United States have reached the finals at each games since 2004, but two-time reigning bronze medalist Netherlands and Britain are set to shake up the order.

Brazil has never failed to win gold in a Paralympic soccer 5-a-side tournament, putting the four-time gold medalists in pole position to do so again in Tokyo.

Sitting volleyball, where players move themselves around the playing surface using their arms, is shaping up to be interesting in both the men's and women's competitions.

China arrives in Tokyo looking to avenge a loss to the United States in the 2016 final that ended a run of three straight women's Paralympic gold medals.

In the men's, Iran and Bosnia and Herzegovina will resume hostilities after facing off in each of the past five Paralympic finals. Iran, on the shoulders of its towering 2.46-meter net dominator Morteza Mehrzadselakjani, is aiming for a seventh gold in the event.

Para cycling will miss the massive presence of Alex Zanardi, who won two gold medals at both London 2012 and Rio 2016. The former Formula One motor racer suffered devastating head injuries in a cycling race crash in 2020.

Swimming could be one of Japan's major sources of success. 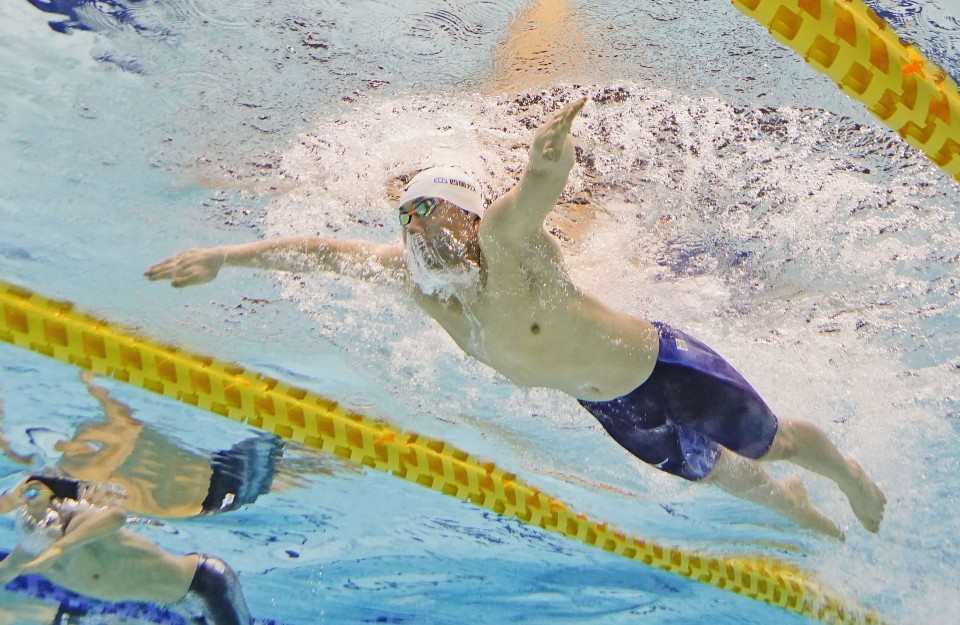 Naohide Yamaguchi swims en route to rewriting his own world record in the men's 100-meter breaststroke preliminary round of the Japan Para Championships at Yokohama International Swimming Pool on May 21, 2021. (Kyodo) ==Kyodo

Like Tokairin, Naohide Yamaguchi arrives at the Tokyo Games as a world champion, his title won in 2019 in the SB14 100 breaststroke.

Interest in the fortunes of Miyuki Yamada, at 14 Japan's youngest Paralympic swimmer ever, will be strong as she looks to feature in the S2 women's backstroke events over 50 and 100.

At the other end of the spectrum, 50-year-old 15-time Paralympic gold medalist Mayumi Narita is back for more. She may not be a big threat in the pool anymore, her most recent medal coming in 2004, but has a wealth of experience to offer the young swimmers around her.

Outside of marathoner Michishita, athletics may not be a happy hunting ground for Japan.

At 36, Maya Nakanishi is competing at her fourth Paralympics. She missed out on T44 bronze by one place in Brazil, but will compete in Tokyo as a world champion in the T64 category -- for single-leg amputees who use one prosthetic -- in the long jump event.

Even if Nakanishi is unable to make a splash in the National Stadium sand, Germany's "blade jumper" Markus Rehm will. 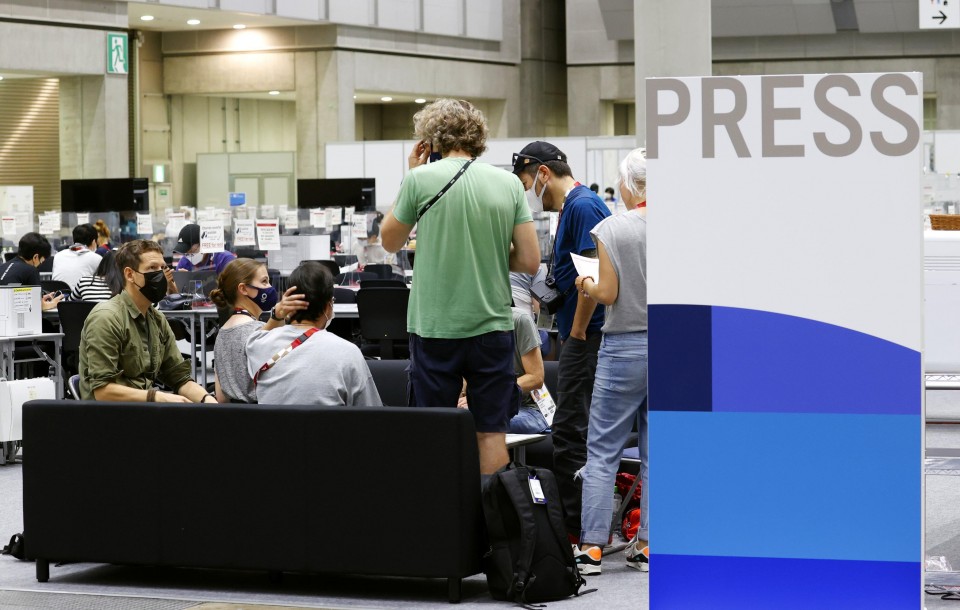 Photo taken on Aug. 21, 2021, shows the main press center for the Tokyo Paralympics in the capital's Koto Ward. (Kyodo) ==Kyodo 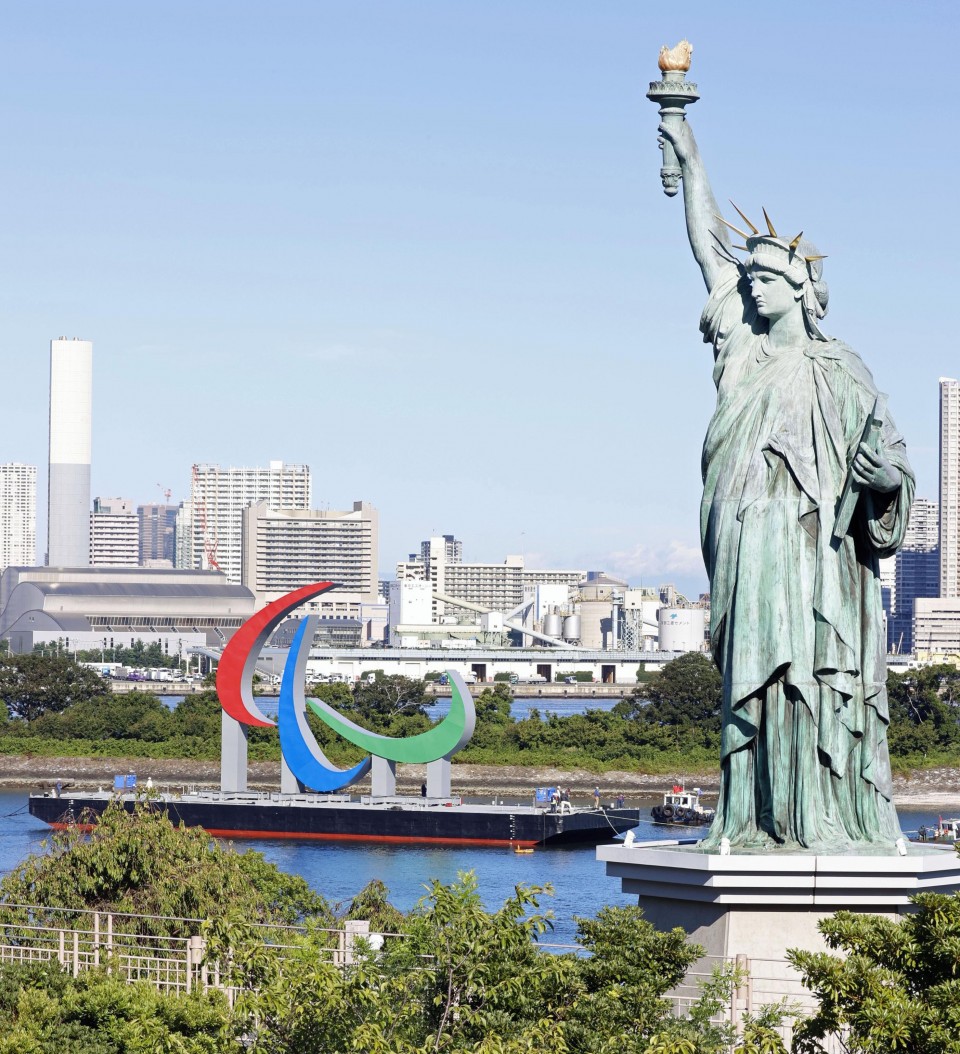 The Paralympic three agitos are towed to their temporary home at Tokyo's Odaiba waterfront area on Aug. 20, 2021, ahead of the opening ceremony of the Tokyo Paralympics on Aug. 24. (Kyodo) ==Kyodo