Early gold-medal favorite Japan had to settle for bronze in wheelchair rugby Sunday at the Tokyo Paralympics after a bittersweet 60-52 victory over Australia.

Following Saturday's heartbreaking loss to the eventual Paralympic champions Britain in the semifinals, an emotionally charged Japan team played aggressively from start to finish at the Yoyogi National Stadium. 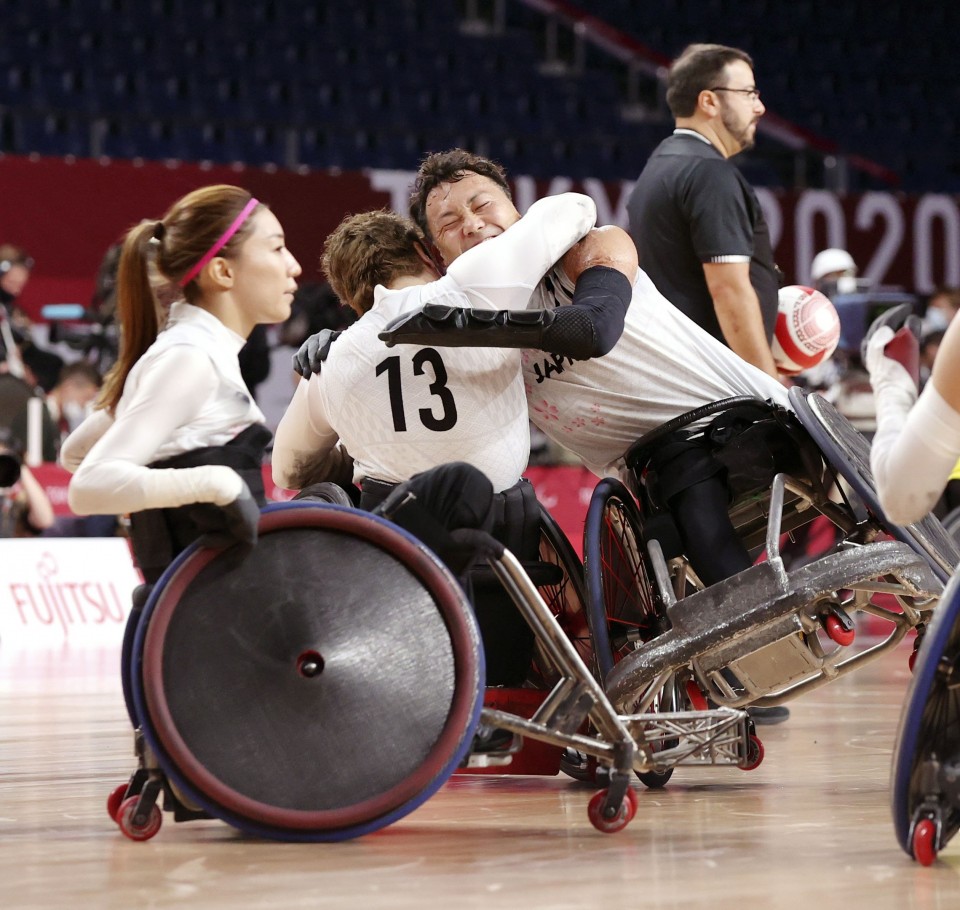 Leading 30-25 at halftime, the reigning world champions and home heroes extended the lead in the third quarter with some stout defense to take a 45-36 advantage into the final period.

The night before the match, Japan coach Kevin Orr was asked by his players what kind of rugby he wants to play.

Orr replied, "We like to play attacking offense and defense."

"That's what we wanted to do today regardless of what lineups they had and I think we did that," he told reporters after the victory.

Captain Yukinobu Ike also told reporters that the aim for Sunday's match was to "work hard throughout the match and play aggressive offense and defense."

"We were able to play a desirable (style of) rugby, which we have been working on since Rio," Ike said. "We were not able to play the type of game we like against Britain," he added.

The offensive contribution from the team's low-pointers was another factor in Japan's win over Australia. Normally, the offense is carried by high-pointers while the players with less mobility focus on defense.

International wheelchair rugby has seven different player classifications from 0.5 to 3.5, with the lower the number, the more severe the level of physical impairment. The cumulative total of the four players on the court at any time must be 8.0 points or fewer.

Japan ace Ikezaki understands the bronze medal was earned through hard work by the whole team and excellent on-court performances but is already thinking of bigger and better things.

"I think this is the best result the team can attain right now, but personally, it is an unsatisfactory and mortifying result," said Ikezaki, who consoled a crying teammate on the court after the match.

"A Paralympic loss can only be made up for at another Paralympics," Ikezaki said.

Australia's star player Batt was reflective after a tournament in which his two-time defending gold medalist team secured only one victory.

"(We are) pretty disappointed that we couldn't pull out more wins or make games closer, but we had a really good run," said Batt.

Japan suffered just one loss at the Tokyo Games. The team was undefeated in the group stage with wins over France, Denmark, and Australia before suffering the 55-49 defeat to Britain.

Japanese players repeatedly said during the tournament that while their level of play has been improving since the Paralympics in Rio de Janeiro in 2016, so has everyone else's.

The mixed wheelchair rugby team also took bronze at the Rio de Janeiro Games, which was Japan's first Paralympic medal in the sport.

In the gold medal match later on Sunday, Britain defeated the United States 54-49, obtaining the first wheelchair rugby medal for the European country.

Britain had gone close to a medal before, finishing fourth in 2004 and 2008 after losing in the bronze medal game each time.