The following is the full text of the Peace Declaration read Friday by Hiroshima Mayor Kazumi Matsui at a ceremony to mark the 76th anniversary of the atomic bombing of the city. 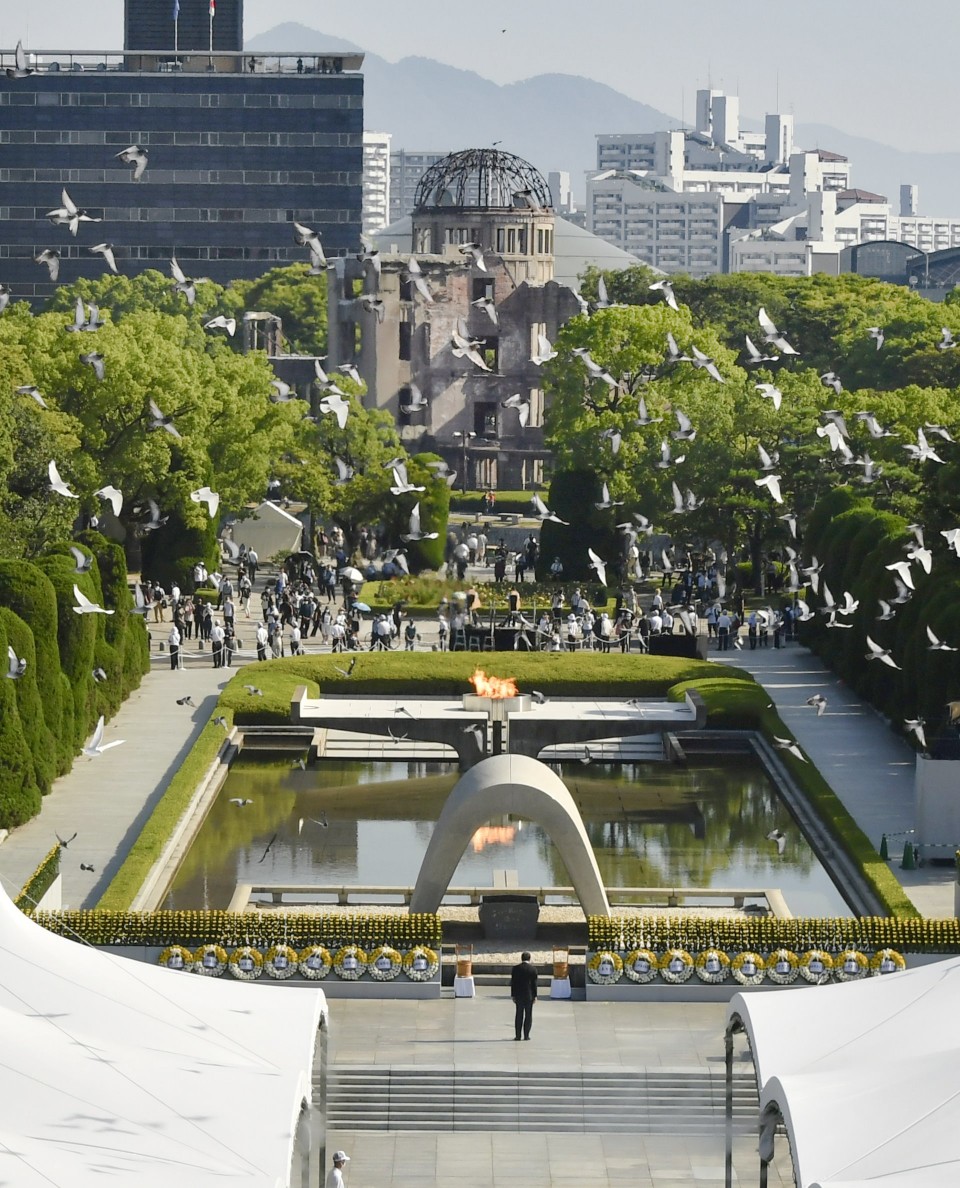 Pigeons are released in the annual ceremony at the Peace Memorial Park near ground zero in Hiroshima on Aug. 6, 2021. (Kyodo)

On this day, 76 years ago, a single atomic bomb instantly reduced our hometown to a scorched plain. That bombing brought cruel death to countless innocent victims and left those who managed to survive with profound, lifelong physical and emotional injuries due to radiation, fear of aftereffects, and economic hardship. One survivor who gave birth to a girl soon after the bombing says, "As more horrors of the bomb came to light, and I became more concerned about their effects, I worried less about myself and more about my child. Imagining the future awaiting my daughter, my suffering grew, night after sleepless night."

"No one else should ever suffer as we have." These words express the will of survivors who, having known horrors too painful to recall, were condemned to fear, frustration, and agony by the likely future of their children and their own irradiated bodies. When hibakusha tell their stories, they convey not only the horror and inhumanity of nuclear weapons but also an intense yearning for peace, born of compassion. Finally, after 75 long years of sustained activity, their demands have moved the international community. This year, on January 22, the Treaty on the Prohibition of Nuclear Weapons (TPNW) entered into effect. It remains now for world leaders to support this treaty, shifting their focus toward a truly sustainable society free from nuclear weapons.

The novel coronavirus still ravages our world. The community of nations recognizes this threat to humanity and is taking urgent measures to end it. Nuclear weapons, developed to win wars, are a threat of total annihilation that we can certainly end if all nations work together. No sustainable society is possible with these weapons continually poised for indiscriminate slaughter. The combined wisdom of all peoples must be trained on their total abolition.

The road to abolition will not be smooth, but a ray of hope shines from the young people now taking up the hibakusha's quest. One survivor who witnessed hell that day entrusts our future to the young with these words: "Start small, but start. I hope each of you will do whatever you can to promote and maintain the treasure we call peace." I ask our young to sustain an unshakeable conviction that nuclear weapons are incompatible with full, healthy lives for their loved ones. I further ask them to share that conviction persuasively with people around the world.

We must never forget that young people can certainly compel world leaders to turn away from nuclear deterrence. Three years after the bombing, Helen Keller visited Hiroshima, encouraging its residents in the struggle to recover. "Alone, we can do so little. Together we can do so much." Her words remind us that individuals, when united, have the power to change the world. If the determination to live in peace sweeps through civil society, people will elect leaders who share that determination. Nuclear weapons are the ultimate human violence. If civil society decides to live without them, the door to a nuclear-weapon-free world will open wide. The atomic bombed city of Hiroshima will never stop preserving the facts of the bombing, disseminating them beyond borders, and conveying them to the future. With the more than 8,000 Mayors for Peace member cities in 165 countries and regions, we will promote a worldwide "culture of peace." In a global culture where peace is a universal value, world leaders will find the courage to correct their policies.

Given the uncertainty concerning nuclear weapons derived from stalled disarmament negotiations, I have an urgent demand to make of world leaders. The time has come for a profound tactical shift away from reliance on threats toward security based on trust derived from dialogue. Experience has taught humanity that threatening others for self-defense benefits no one. Our leaders must understand that threatening rivals with nuclear weapons achieves nothing of value, but treating each other with empathy and building long-lasting friendships connect directly to national self-interest. To that end, I urge all world leaders to visit Hiroshima and Nagasaki, achieve a deeper understanding of the bombings, fulfill the disarmament mandate of the Nuclear Non-Proliferation Treaty, and join the discussions aimed at maximizing the effectiveness of the TPNW.

With respect to the Japanese government, I request productive mediation between the nuclear and non-nuclear-weapon states. Furthermore, in accordance with the will of the hibakusha, I demand immediate signing and ratification of the TPNW, then constructive participation in the first Meeting of States Parties. Fulfilling the role of mediator must involve creating an environment that facilitates the restoration of international trust and security without reliance on nuclear weapons. The average age of our hibakusha is close to 84. I demand more generous assistance for them and the many others suffering daily due to the harmful physical and emotional effects of radiation. I demand as well immediate relief for those exposed to the black rain.

At this Peace Memorial Ceremony marking 76 years since the bombing, we offer heartfelt prayers for the peaceful repose of the souls of the atomic bomb victims. Together with Nagasaki and like-minded people around the world, we pledge to do everything in our power to abolish nuclear weapons and light the way toward lasting world peace.