Otoguro outpointed Azerbaijan's Haji Aliyev in a championship bout that went down to the wire, before Susaki earned the host nation's fifth wrestling gold medal by blowing away China's Sun Yanan in 1 minute, 36 seconds on the final day of wrestling competition. 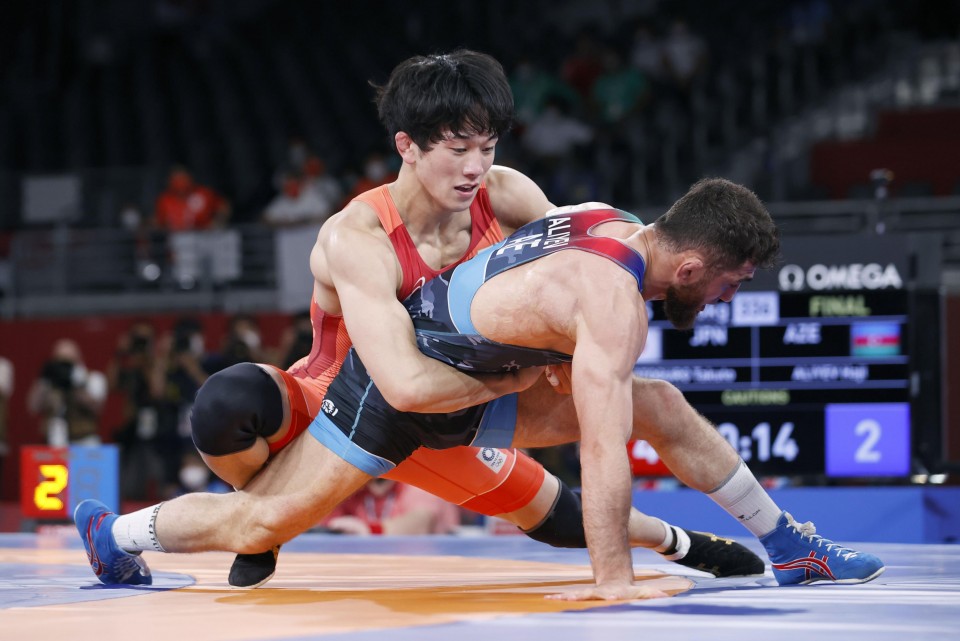 Takuto Otoguro (L) of Japan and Haji Aliyev of Azerbaijan compete in the men's wrestling freestyle 65-kilogram final at the Tokyo Olympics on Aug. 7, 2021, at Makuhari Messe Hall in Chiba near Tokyo. (Kyodo) ==Kyodo 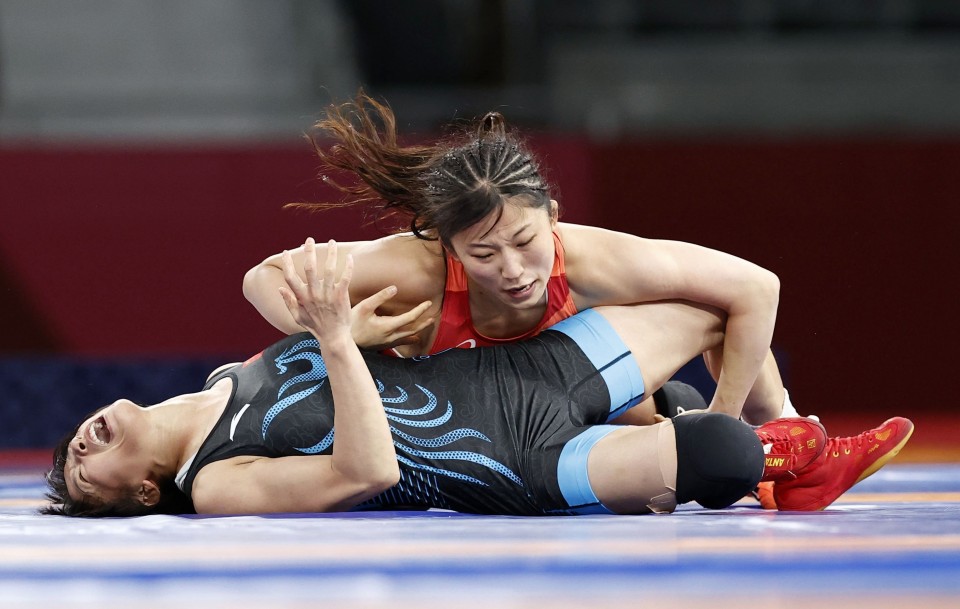 Yui Susaki of Japan (top) and Sun Yanan of China compete in the women's wrestling freestyle 50-kilogram final at the Tokyo Olympics on Aug. 7, 2021, at Makuhari Messe Hall in Chiba near Tokyo. (Kyodo) ==Kyodo

The pair joins sisters Yukako and Risako Kawai, winners of the women's 62-kg and 57-kg divisions, respectively, and 53-kg champion Mayu Mukaida in topping the podium at Makuhari Messe Hall east of Tokyo.

Breaking a 2-2 tie with a takedown late in the final period, the 22-year-old Otoguro withstood a furious last-ditch victory bid from Aliyev, a three-time world champion who took 57-kg bronze at the 2016 Rio de Janeiro Games.

"The pressure was enormous. After the Olympics began, other athletes started winning gold. During the games, we didn't win any medals in (men's) freestyle and it was my turn," Otoguro said.

"It was a tough tournament but everybody around me was united, helping me to win. I'm very happy."

The 2018 world champion and two-time defending Asian champion, Otoguro, competing in his first Olympics, is the first Japanese man to win an Olympic freestyle title since Tatsuhiro Yonemitsu achieved the feat at 66 kg in London in 2012. 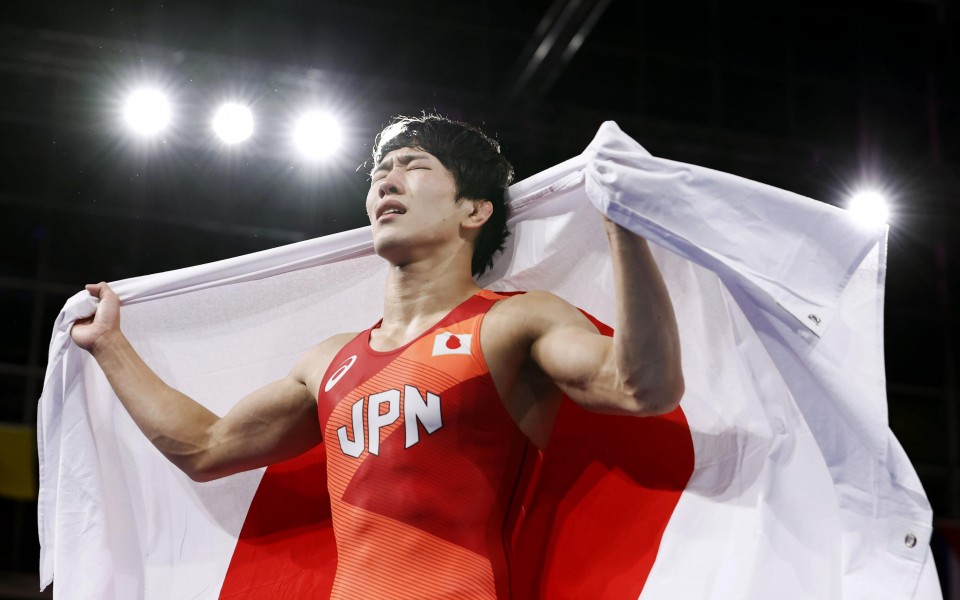 Takuto Otoguro of Japan celebrates after winning the men's wrestling freestyle 65-kilogram final against Haji Aliyev of Azerbaijan at the Tokyo Olympics on Aug. 7, 2021, at Makuhari Messe Hall in Chiba near Tokyo. (Kyodo) ==Kyodo

Otoguro's older brother Keisuke competed at the Tokyo Games in the men's 74-kg freestyle, but his loss to Kazakhstan's Daniyar Kaisanov on Thursday ended their hopes of becoming Japan's latest gold-medal winning siblings.

"My brother lost (the other day) and both of us winning gold didn't come true. So I gave it my all to win this for my brother as well," a tearful Otoguro said.

A two-time world champion, the 22-year-old Susaki made her first Olympics one to remember, quickly racking up a 10-0 technical fall win at the wrestling venue in her native Chiba Prefecture.

With barely a minute gone, Susaki took control of Rio bronze medalist Sun from behind, wrapping up her legs and repeatedly twisting her to the mat until reaching the 10-point threshold for automatic victory. 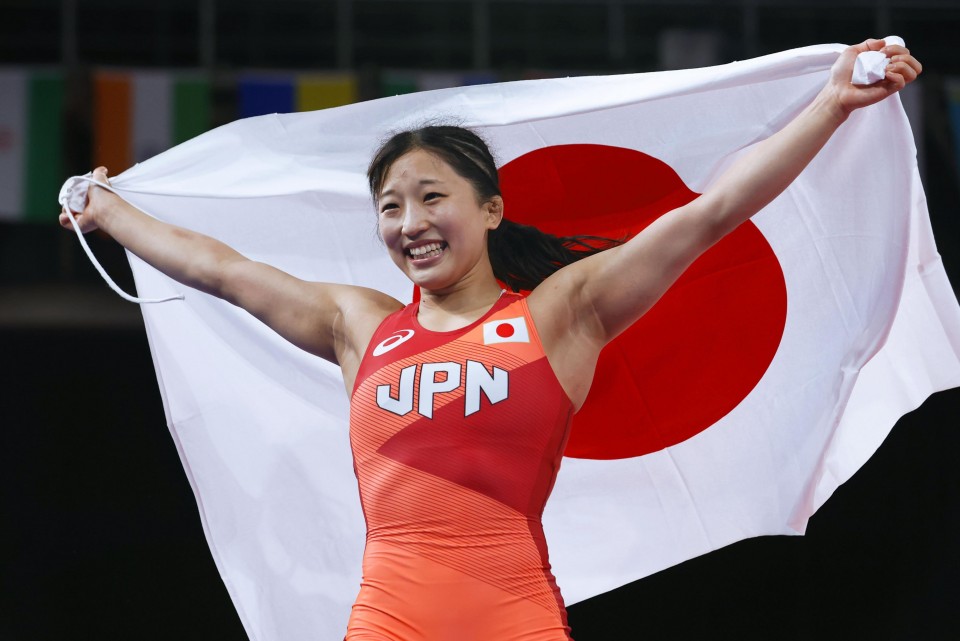 Yui Susaki of Japan celebrates after winning the women's wrestling freestyle 50-kilogram final against Sun Yanan of China at the Tokyo Olympics on Aug. 7, 2021, at Makuhari Messe Hall in Chiba near Tokyo. (Kyodo) ==Kyodo

"I've achieved what I have because of all the people who supported me. I'm so thankful," said an emotional Susaki, who was one of her country's flagbearers at the opening ceremony.

"It's truly like a dream...I'll stop crying and try to show my best smile (on the podium)." After receiving the gold, she said, "I'm so glad that I was able to show the gold medal to my family, friends and fellow athletes who believed in me."

Otoguro was first on the board in his final, catching his opponent's leg and executing a two-point takedown barely a minute into the bout. But Aliyev responded in kind at the end of the period for a 2-2 deadlock at the interval.

With less than a minute remaining, Otoguro looked to lock up Aliyev on the mat but could not establish control, leading German referee Jeffrey Spiegel to separate the pair.

Restarting with 31 seconds on the clock, Otoguro went on the attack and took Aliyev to the mat for a 4-2 lead with 14 seconds remaining. Otoguro picked up two cautions in the tense final moments but fended off Aliyev at the death.